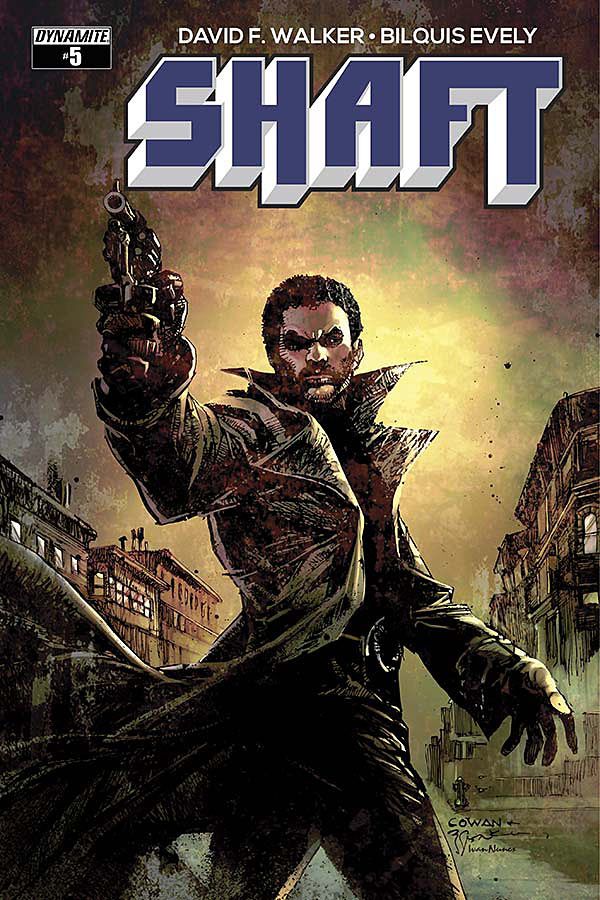 Let’s establish a few things leading into Shaft #5. This series is something audiences have been asking for – great writing, attractive artwork, and amazing dialogue. It has a level of character depth even beyond what we could have expected, and it’s all featuring a lead character of color. The setting, Harlem, New York, is not only the backdrop but the invisible supporting character as well, living and breathing with personality and behavior characteristics as much as any other character with a voice. Shaft is an amazing origin story that Walker has created, and an unapologetically Black one. It’s been nominated for several awards, including the Dwayne McDuffie Award for Diversity (awarded to Nilah Magruder for M.F.K.), and a Glyph Award for Story of the Year. We can only hope to have more comics like this in the future.

That said, we’re almost at the end of this 6-issue ride and I’m excited for the conclusion, because this comic is going to go out with both guns blazing. We thought to use the Man on Fire scene back in issue #3’s review? Should’ve saved it for now, because this officially switched gears to full revenge-mode and the countdown is just about over for things to go from “messy” to straight up murda music in D major.

[divider type=”space_thin”]
Shaft #4 is quite dialogue heavy as it explains a lot of the questions behind the mystery of Arletha’s death and what type of situation she was caught in. Everyone sees that Shaft is a stray problem whose unknowingly playing out of his league in a criminal underbelly, and Shaft is fine to leave them to their illusions knowing he’s far smarter than everyone thinks. There’s an old saying,“It is the clever man who plays the fool,” and John Shaft is very clever. As readers have come to expect, Shaft’s inner dialogue walks you through his discoveries and gives insight into his anger, moodiness, and the take-no-shit attitude that his character is so well known for.

Collect this comic, reread it, and enjoy it; then hold your breath for what’s to come. Everyone will be sad to see this series come to an end soon, but recognition of its success will hopefully open doors for many stories like it.