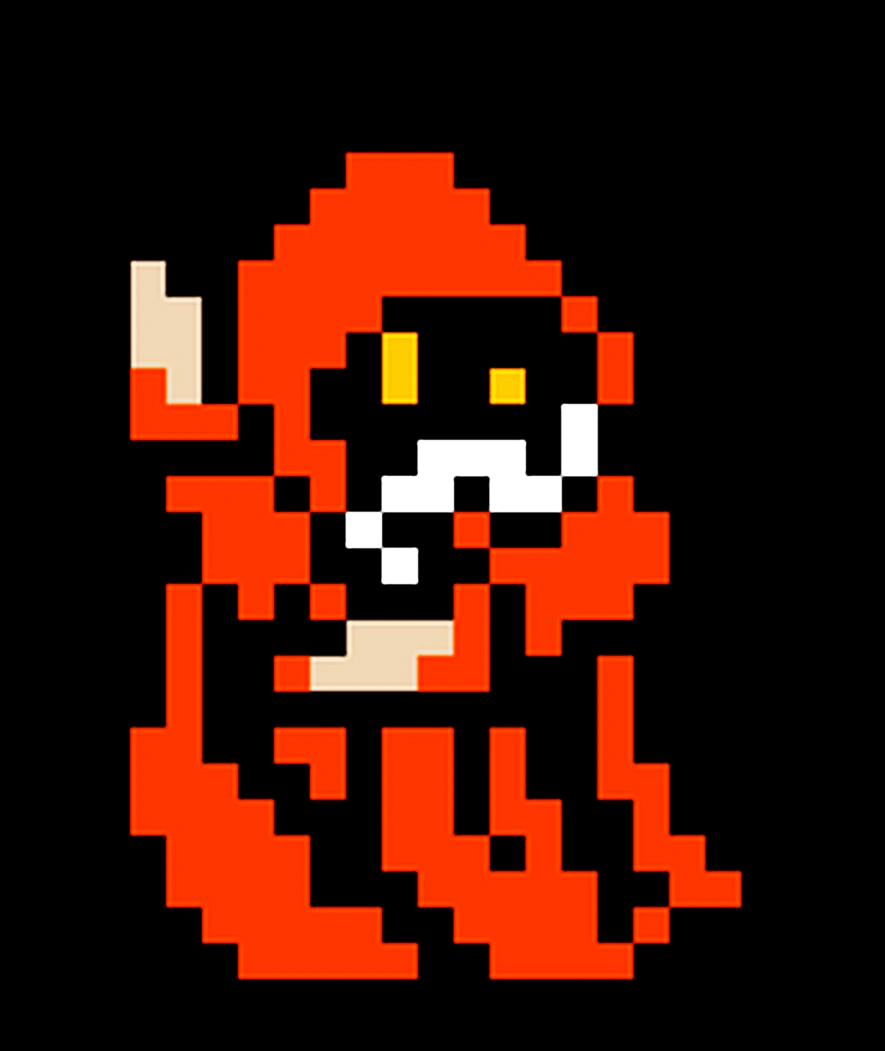 Every love story has a beginning.

This is a relatively innocuous truth, but it’s an important one to remember especially the older you get. The love I’m talking about today is not romantic in nature although there is a deep-seated passion underlying the contents of this article.

No, today’s story is more akin to an origin story of how I became the prolific comic reader I am today, although there are surprisingly few superheroes involved. Before I was a staff writer here at Black Nerd Problems, I recounted how my journey into physical comics started in 2010 when I discovered a shop on the Delmar Loop in St. Louis. Before that I loved graphic novels from the greats like Alan Moore and Neil Gaiman. But before all of that happened, there was a different inciting incident, a particular story that itself starts with a search for something special… 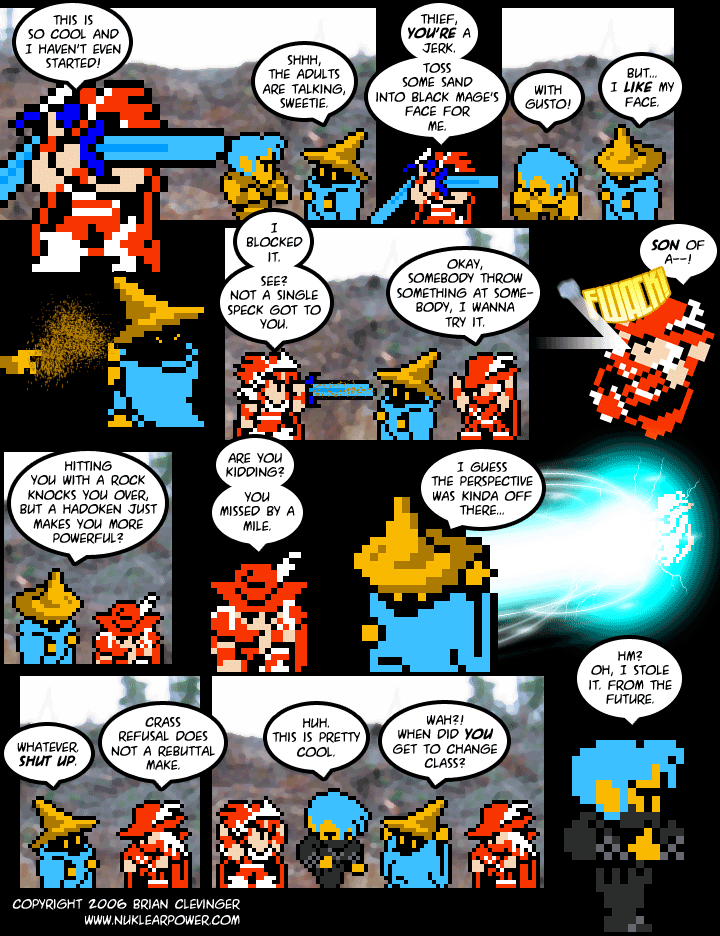 In middle school, I was very much a nerd, although back then I spent a disproportionate amount of time playing video games compared to the rest of my nerdy hobbies. You may or may not remember the pre-YouTube/pre-Reddit era of the internet where information was mostly given in text-based format, and thus you may or may not remember a site called GameFAQs, a hosting site for various user-generated text based guides. This was the pinnacle of video game aides given that Prima Strategy Guides cost money that exceeded allowances. I used the site daily, voting in their polls, looking up information for my limited play time, and most importantly for this story: reading the forums.

I was just shy of 13 when I started browsing and couldn’t make my own account, so I mostly just read the conversations. I read the sig file at the end of each post. It’s weird to think that we used to have a digital stamp with the exact same information every time we posted information, but that’s how things worked back then.

Now I couldn’t tell you which precise sig file finally convinced me to go searching for the source material, but memory is foggy and all that really matters is that after seeing a bunch of gamers constantly reference this one webcomic, I eventually navigated my way to Nuklear Power. I stared at the several years of comics in the archives before promptly reading 8-Bit Theater. I wouldn’t then realize how much of my life was going to be consumed by the decision to read this daily-ish strip or how strongly and inadvertently it would lead me down the path I continue on to this day. 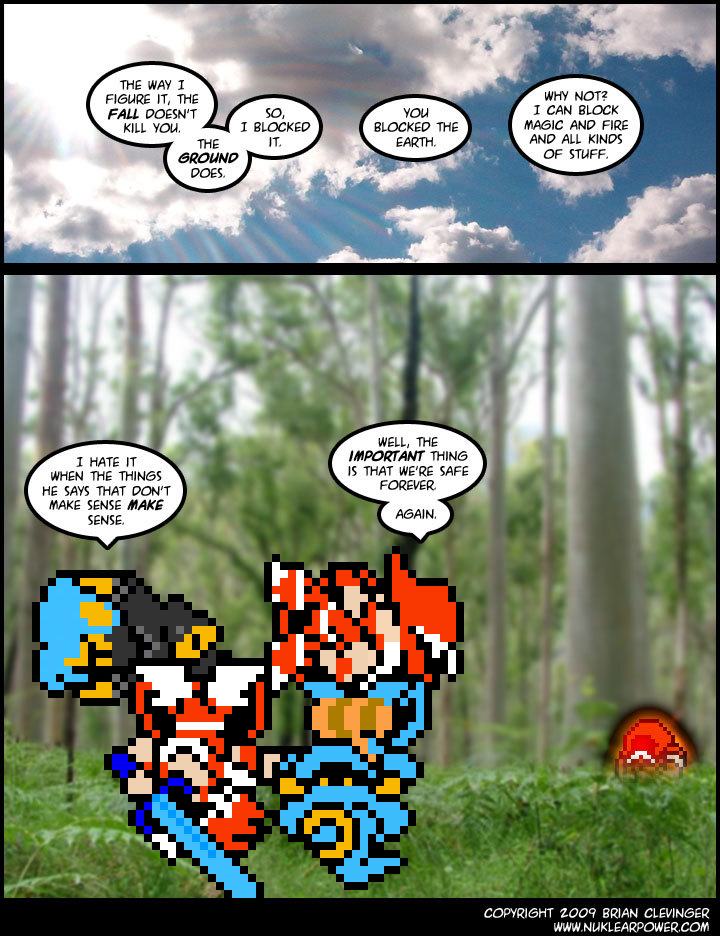 8-Bit Theater was one of the forefathers of the “sprite comic.” Authors took video game sprites and wrote their own comics with these stock characters in various environments. 8-Bit Theater itself is a parody/deconstruction/reconstruction/genre-defying thing based on the original Final Fantasy. And for nine years, Brian Clevinger dutifully updated this sprawling saga of the Warriors of Light:

Alongside a varied supporting cast, most notably Garland and White Mage, we saw the group as they conquered dungeons, dissected (and sometimes brutally vivisected) video game and role playing tropes, and developed one of the most meta-textual, self-referential, self-deprecating encyclopedia of esoteric in-jokes*. Nearly a decade later, I remember oh so many of them. 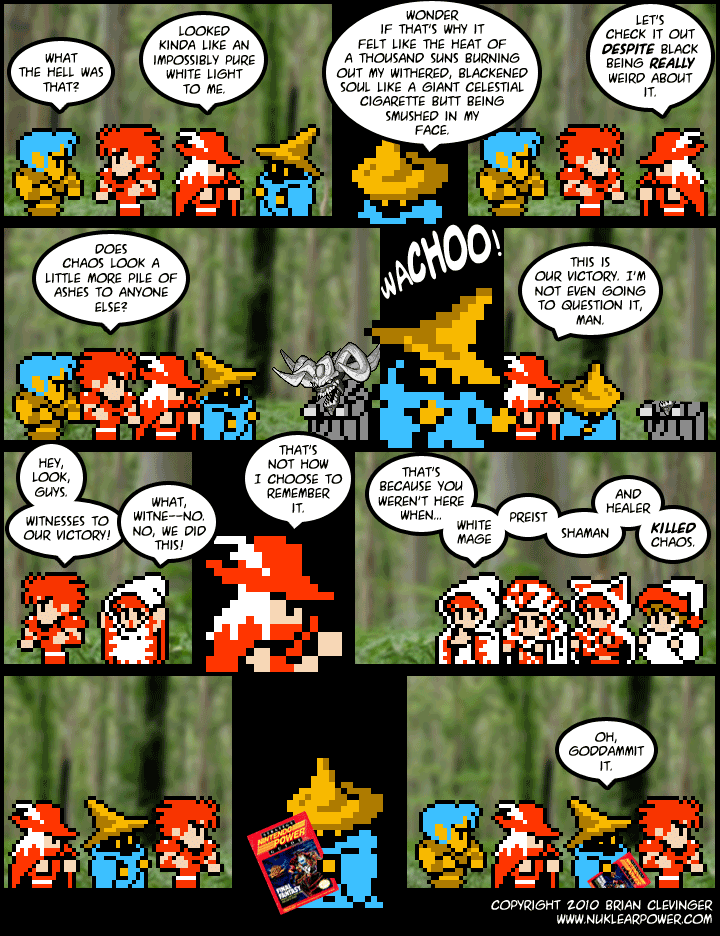 There was the time that Thief stole his class upgrade to Ninja from the nebulous future. Red Mage casting Ice-IX in an unexpected reference to Kurt Vonnegut. Fighter literally blocking the Earth to prevent fall damage (what a legend). Black Mage defeating the ruler of Hell and somehow becoming more incredibly evil than a Black Mage named Black Mage Evilwizardington already was. The Armor and Armorie of Invincinibility, and a several year set up of a brick joke where an off reference to 4 White Mages defeating the final boss of Final Fantasy came to fruition in the final arc of the webcomic. 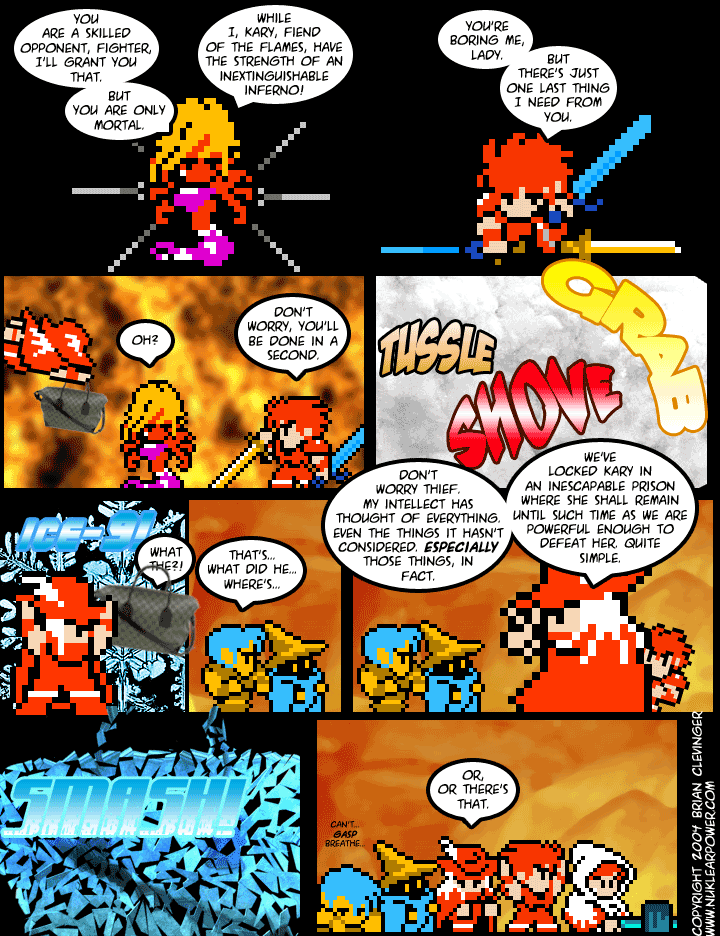 8-Bit Theater thrived on Clevinger’s love of video games and ability to use serialized webcomic formatting to tell this comedic tale. It was my first webcomic, although it certainly wasn’t my last.

The Age of Webcomics

The 2000’s was an incredibly fertile time for webcomics, and I think at my peak I was reading upwards of 30 some comics strips regularly. See after 8-Bit Theater, I delved into all sorts of comics hosting sites and linked recommendations. I got hooked on the original incarnation of Ctrl+Alt+Del, PvP, Penny Arcade, Bob and George, and a general trend of gaming-related comic media. At some point I slowly pivoted outwards to things like Questionable Content, XKCD, and Multiplex Comics, all stories that I sat down and climbed through months to years of archives.

Reading all of these comics incessantly eventually led me to things like Watchmen and Sandman, but more importantly to Scott McCloud. By the time I was a junior in high school, I was obsessed with the media and the things that could be done with a comic that couldn’t be done outside of them. Then I became enthralled by what only webcomics could do. Implementations of infinite canvases, animations, stealth editing of old pages. 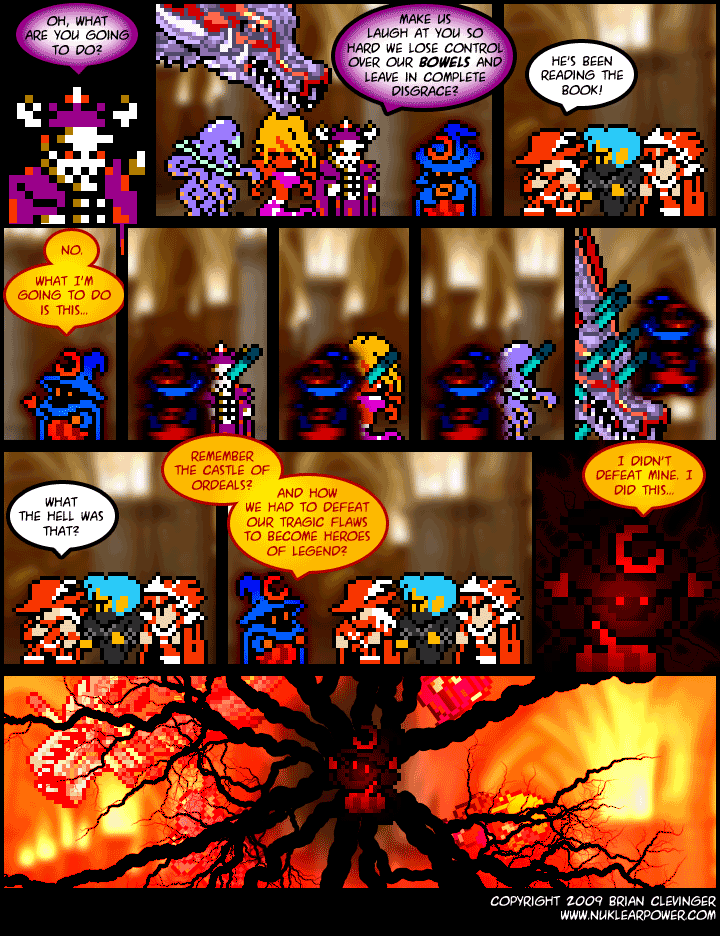 8-Bit Theater did a lot of cool things with its narrative, but some of its contemporaries and successors fundamentally altered my understanding of what was possible. Comics like Kidd Radd, another 8-Bit Parody (and a better version of Wreck-It Ralph‘s main premise),Homestuck utilized the internet’s functionality in weirder and more novel ways, and Order of the Stick made use of different drawing styles to enhance its world building (admittedly, it wasn’t the only one to do this, just the one that made the most narrative sense).

In many ways, it is fitting that 2010 was the end of 8-Bit Theater. Right at the time my webcomic list had slowly whittled down. And how lucky that I found a store right next door to me that managed to keep kindling the passion for all comics…

These days I only have about three webcomics** from my original reading list still in my RSS feeds (surprisingly, I still use RSS feed). Most of my comic consumption lies in single issues now. I have amassed 10 boxes worth of floppies. Mostly DC, some Image, and increasingly number of Marvel titles. My weekly visit to Star Clipper is one of my most valued rituals. I’ve made so many friends thanks to comics, which I only truly loved thanks to webcomics. Although strangely enough, thanks to WebToons I’ve somehow managed to find myself with a slowly growing list of new webcomics***.

I’d say it’s funny how that works, but it’s really more just narrative appropriateness. It’s really more just how comics work. The callback, the flash forward, the odd continuity. It’s important to remember where we came from and where we’re going. How our first loves helped us find our true loves. I love comics now, and that’s because I loved 8-Bit Theater first. 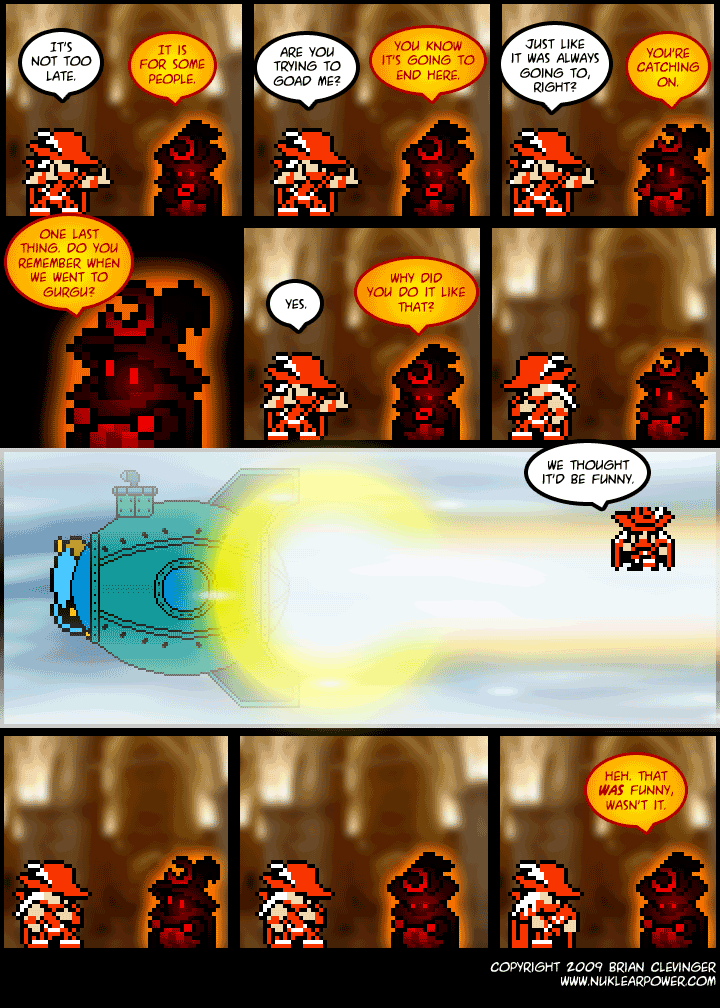 * For the most meta-textual, self-referential, self-depreciating encyclopedia of esoteric in-jokes, I will direct you to this piece about Homestuck, another webcomic that devoured a significant chunk of my life.
** If you’re curious, those would be XKCD, Questionable Content, and Order of the Stick. Although, strangely Homestuck may be making its way back on to my list.
*** Messenger, Blue Chair (Shen of Owl Turd Comics), and Let’s Play. Because of course we brings things back fully circle.