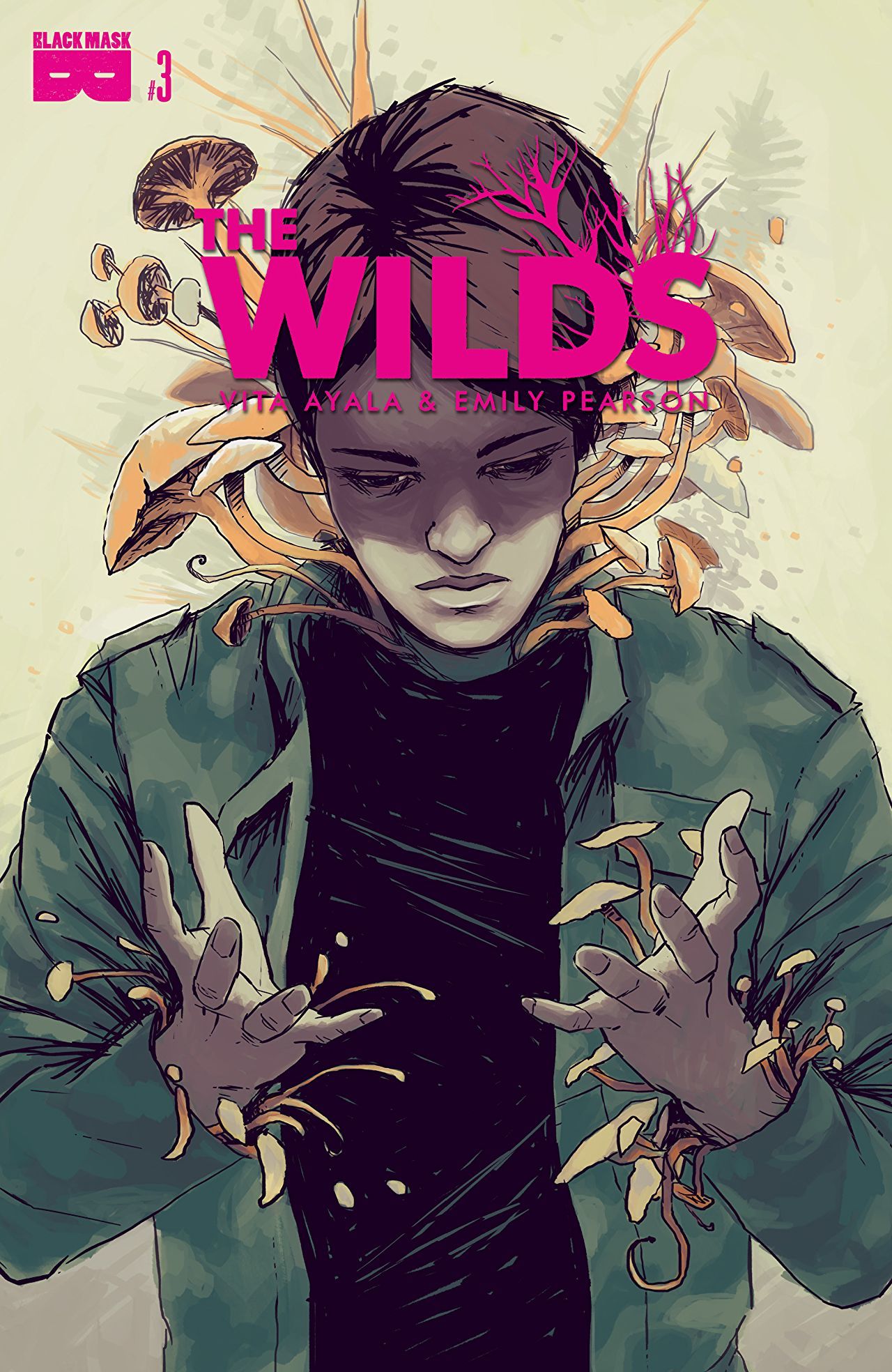 As I’ve said before, I’ve always loved zombie and infection/outbreak stories as they can give us some of the best narratives of human survival and what happens to us with the breakdown of human civilization. Of course the infected, the dead, the undead, the zeds, the muertos or whatever you call them can pose a problem as they’re trying to devour you.

Yet the interactions with fellow survivors, fellow human beings that aren’t infected are always good fodder in plots as they pose at times, a bigger threat: people who use you in order to survive. Folks that treat you like resources or an ends to a means for their plans.

As seen in more recent popular zombie adaptions such as The Walking Dead television show where the Governor and Negan became terrible adversaries. It be your own people. It be your own surviving human race. Another facet that drew me to this comic was that it’s protagonist is a woman: Daisy. A Queer WOC. I know how dangerous it is to be a woman in the real world. I mean… my vagina is more regulated by the U.S. government than guns are. And I am always looking for more comics of female characters handled by more creative teams with more women (and more marginalized folks in general) than men. Why? The opening pages of this issue remind me why I feel like that and how minor details found in the pages below bring that back into focus. 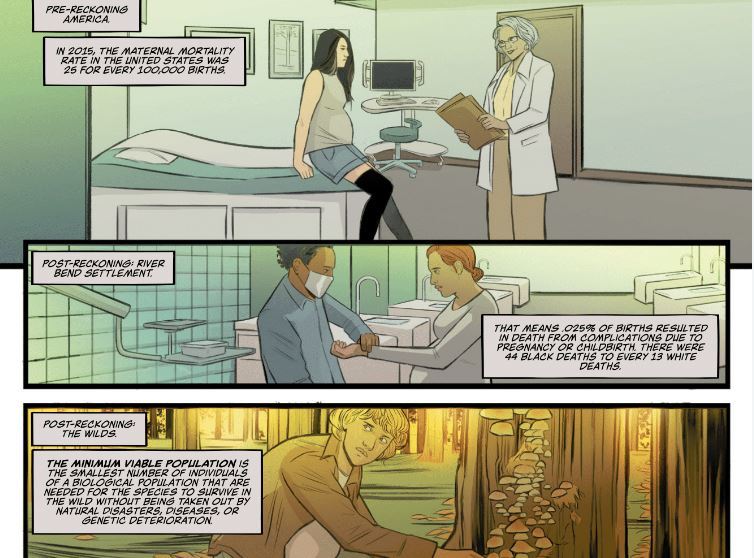 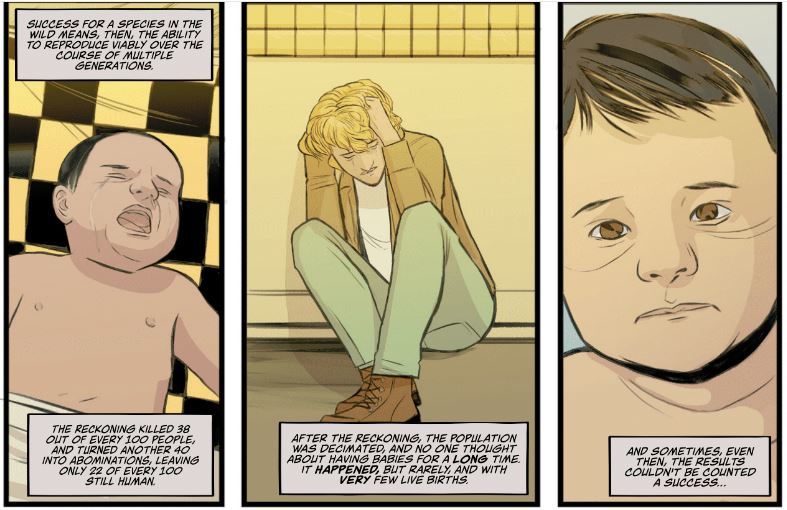 The opening pages of this issue instantly grabbed my attention: on touching bases with the relationship of women, their bodies and motherhood before and after the reckoning, the event that triggered the flowerly yet deadly infection across the land. It is a sobering detail. It also makes me happy that this first page includes the plight of Black women in how dangerous maternal mortality can be as Black women tend to die three times the rate of white women in childbirth in real life.

What is like to be a woman in the Zombie Apocalypse?

What is it like to be a woman or female presenting person after the reckoning? To be underestimated? To have circumcised agency? To be made an example by your superior? To be aware that your body is seen by some as not entirely your own? What is like to know that as a woman that is a way for you life to end without the undead even touching you as we’ve seen in butchered storylines of pregnant women from all manner of zombie tales with Laurie and Maggie from TWD coming to mind first? Issue Number Three picks up the baton it had been running with last issue and sets a steady pace exploring some of these questions and this comic has finally pushed itself to where it needs to be.

Story-wise, writer Ayala puts their foot into the pot, weaving together these two tiers of actions, these parallels of Daisy and Heather. Daisy is out, yet again on the road with a mission and implicit orders from the top. Having said goodbye to Heather after making up, she sees her off as her love is also off on a mission to deliver. Daisy is on to something–their compound’s last runner whom they’ve just lost was doing the most. He was trying to bring in a delivery of goods that would free all of the runners from their contracts and the dangerous obligation of their newer profession. She’s starting to follow the bread crumbs and they are in fact leading her somewhere indeed. Heather, as we know from last issue was knocked out and taken somewhere. Where she finds herself and what she stumbles upon while attempting an escape is as big as a plot twist that I had to let out a Rick Flair type WOOOOOOOOOOOOOOOOO. The plot threads get strung together a little tighter which is great payoff as a reader third issue in.

Art-wise, Pearson’s illustration style of unique drawn people who looked hardened and not glamorous in this new world remains to be one of my favorite books to read and review. Her figures stand out against the brighter work of colorist Stelladia, standing in for Marissa Louise for this issue. The brightly colored candy like coloring job is perhaps integrated into the look and feel, the aesthetic of The Wilds so well that I say it is a selling point of this book. To landscapes to cars to foliage, this book shines in the best way and even the lettering work by Campbell adds to this overall feel in this issue with a funeral and an escape scene looking more striking because of it.

I picked this book up because there I knew the creative team had a winner, a stunner on their hands. With a few more issues under their belt to flesh out the story I’m sure they’ll be more like me pointing to The Wilds as the book you need to be reading.

Read more of our site’s reviews of The Wilds here.