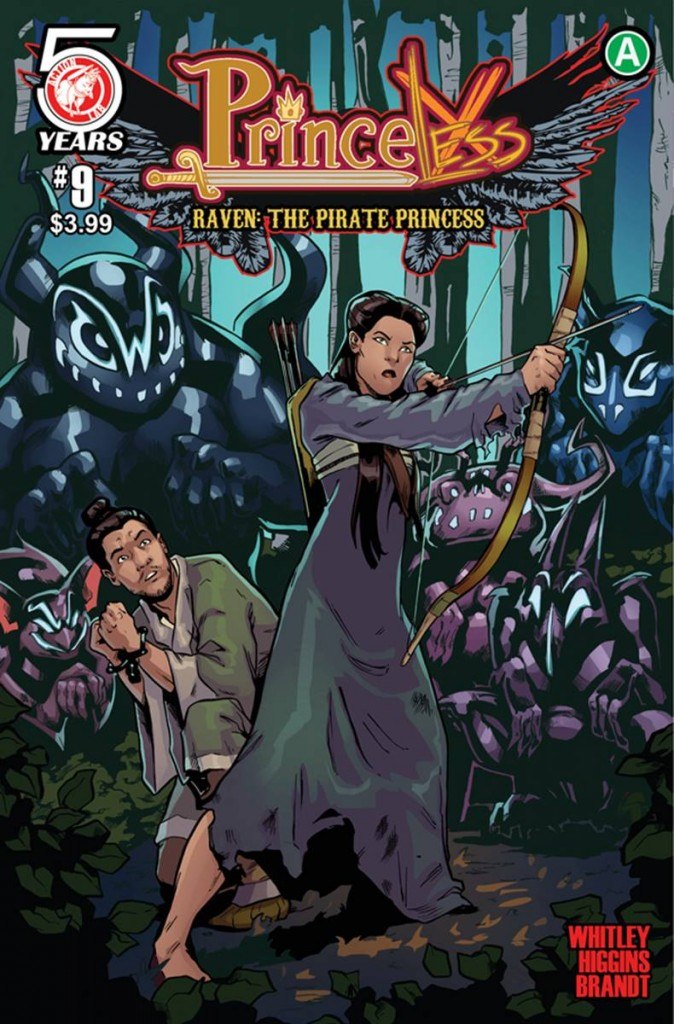 This issue is a real change of pace from previous issues — a fact that is both good and surprising. After the climax of meeting the key villains of the story, it is time for the characters and the plot to step back and redirect to the next arc. Don’t worry, there’s still plenty of swashbuckling and a good side of character development for the supporting cast. But there’s also romance and angst, both of which have been bubbling under the surface in the triangle of Raven, Sunshine, and Ximena. These serious adult emotions are well handled by Whitley and an artist crew that just keeps growing.

To start, Ximena was injured in the rescue mission of Issue #8, leaving Raven feeling guilty and defeated. It also leaves the crew without a navigator. Setting sail for an island known for its medical treatments, Raven’s attention is pulled to Ximena’s health by Amirah, the closest the pirates have to a medic. But before Amirah can help Raven comfort Ximena, she needs to have a serious talk with the captain: 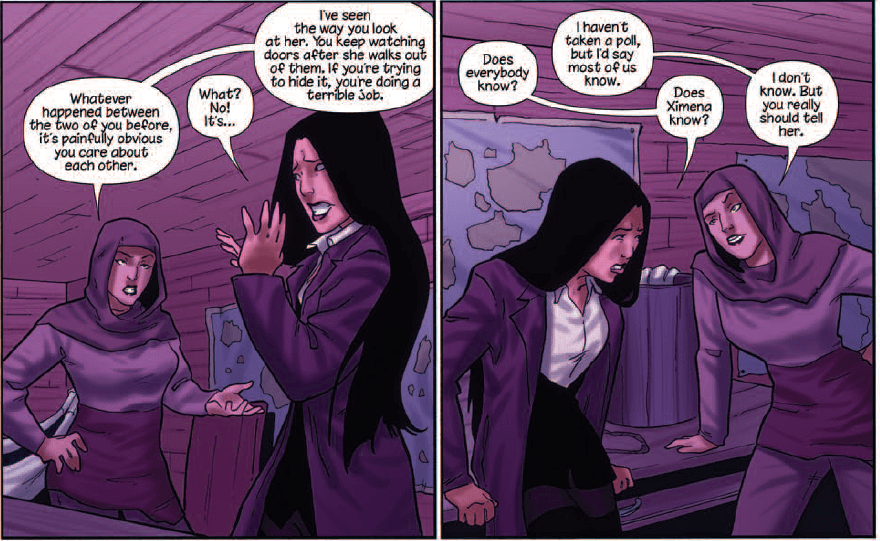 Now, I think to the reader, this conversation is common sense, but as in any other fiction, we all want to think our love is a secret, no matter how obviously we wear it. Revealed, and now vulnerable, Amirah sits Raven down with a simple direction.

To tell this story, Whitley cleverly employs the classic “tale within a tale” motif, having Raven tell the story of the romance of between her ancestors as a stand in for the romance that is growing between herself and Ximena. But Whitley doesn’t just tell a story in a story, he also employs a different pencil/inks duo to draw that story, completely setting it apart from the “frame” of the original story. The result is the magical interlude of Hei Xing and Rong Tao involving bows, arrows, demons horses, non-violence, and a deadly shovel. In the midst of it, despite the traditional veneer of the story, Whitley doesn’t let you forget this is still Princeless:

These are princesses who save themselves and others.

No doubt, this issue continues to deliver a unique writing style, deep characters, and a plot that I can enjoy on my own and with my daughter. Whether she prefers Adrienne or Raven varies by the week, but what never varies is the breath of fresh air that both Princeless series represent. This is a great comic and I’m in till the end. Are you?

8.5 Demon-Slaying Princesses out of 10

Are you reading Raven: The Pirate Princess? Catch up on reviews of other issues.