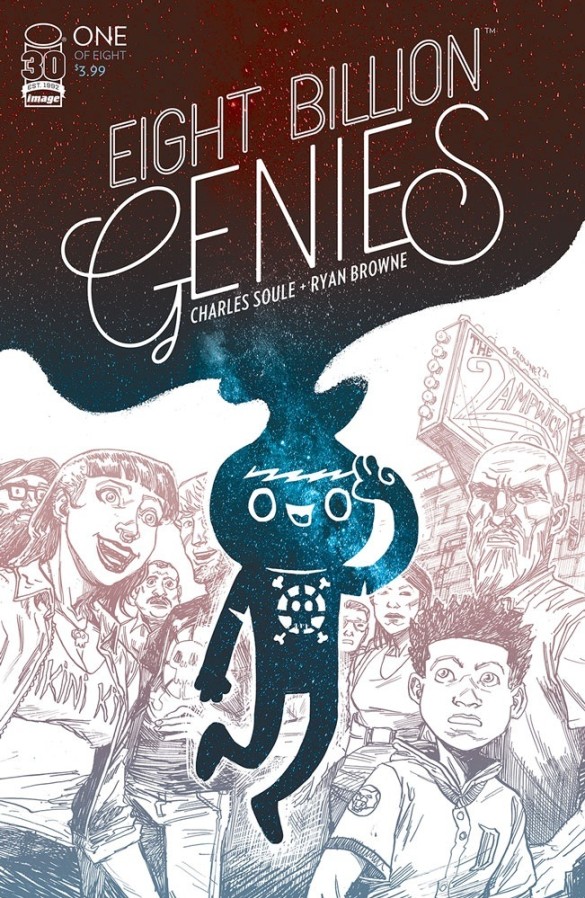 It’s an incredibly simple concept. Imagine that you are going about your day and suddenly, a small phantasmal figure appears in your line of sight and says, “You can have one wish.” Which, in and of itself, would probably bring a veritable treasure trove of shenanigans. But now imagine that eight billion people have also gotten to make a wish. That’s the entire premise of this latest speculative fiction comic that is Soule and Browne’s Eight Billion Genies, and the chaos starts pretty much from the get.

Eight Billion Genies #1 starts with a little bit of a wonky framing as the narration sets the action in a small bar in a Michigan town “tomorrow.” We see the proprietor of the bar interact with various acquaintances and customers before the scope is slowly expanded to other people across the world. Soule does a great job of fleshing out the different characters with dialog and manages to create a solid rapport. Who wouldn’t emphasis with an almost twelve-year-old trying to make the best of a rough home situation, or the wise barkeep with a clearly mysterious past? Brown brings all of the characters to life, while also keeping the pages flowing as more characters get introduced and the more fantastical elements of the story kick in.

When the titular, ephemeral genies show up, everything quickly escalates and within just the first second so many chaotic things happen in a wonderful cacophony of inner desires and truly imaginative imagery. As the time scale escalates from eight seconds to eight minutes, Soule and Browne takes us through several different scenarios in a rapid succession and deftly create a polar sense of impulsive and foresight, of selfishness and selflessness. It’s a high concept premise that is executed brilliantly.

Eight Billion Genies #1 is a refreshingly vibrant first issue that dives headfirst into its conceit and just presses the gas pedal as hard as possible. Soule’s quick wit and writing paired with the surrealistic art from Browne work wonderfully in concert for this wild premise, and I’ll be following very closely to see what happens in the next issue/eight hours next month.