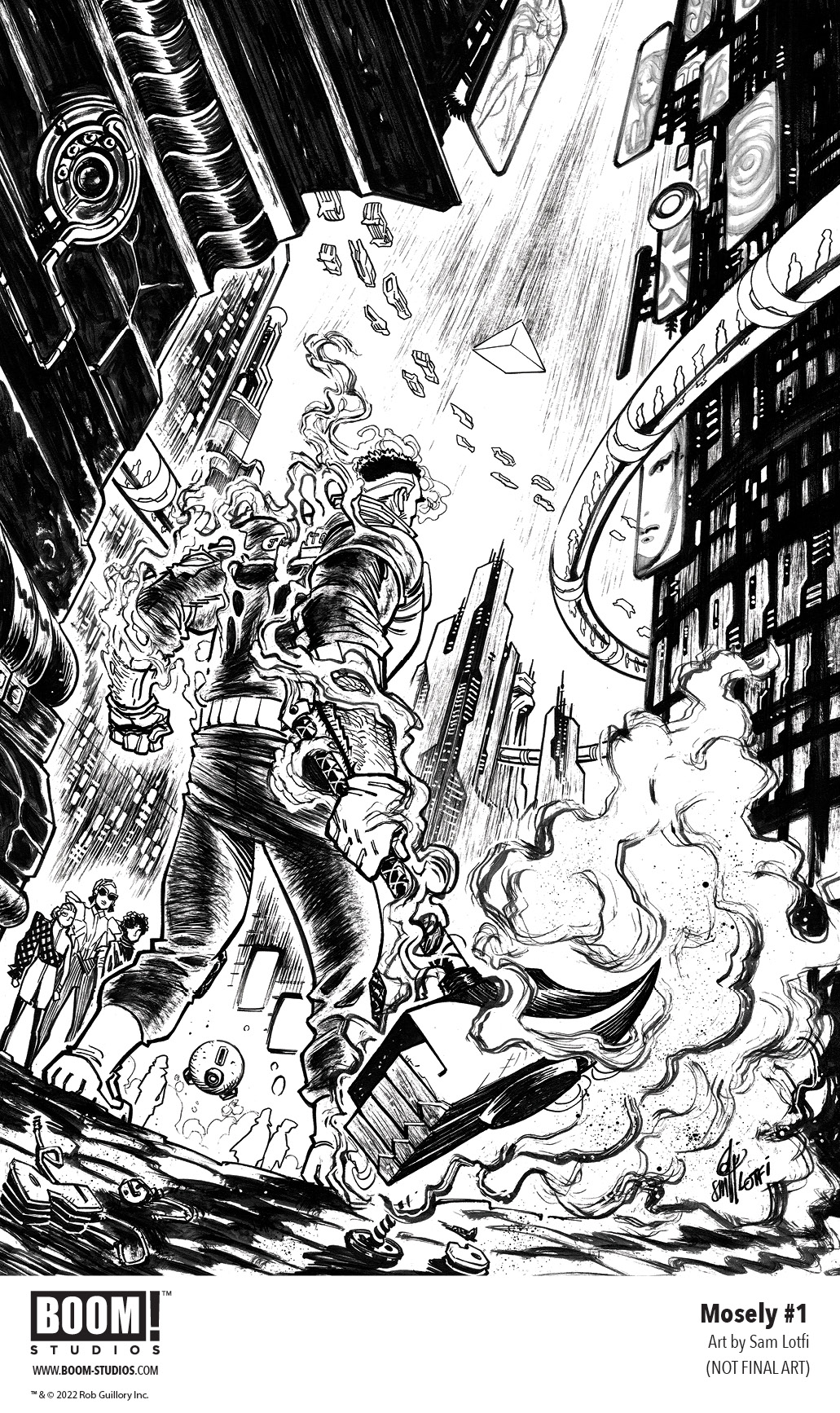 We here at Black Nerd Problems are happy to be the first to share that BOOM! Studios has announced MOSELY, a brand new five-issue limited series from Farmhand creator and co-creator of Chew, Rob Guillory, highly acclaimed artist Sam Lotfi (Harley Quinn), and colorist Jean-Francois Beaulieu (I Hate Fairyland), chronicling one man’s attempt to take down the mighty idols of technology that have captivated the world in the near future. Available in stores January 2023.

In the hyper-technological world of the later 21st century, Mosely is a bitter old janitor on a mission from a higher power—to unleash holy Hell upon the “too big to fail” Tech Gods.

Can one man bring down the corporate powers who’ve used their vast influence to oppress an all too complacent human race (and hopefully win back the favor of his estranged family while he’s at it)? Mosely’s taking up the Holy Hammer and you better believe he’s gonna smash some $h!t until he sets mankind free!

Rob Guillory is an Eisner Award-winning American comic book artist and writer. Born, raised, and currently based in Lafayette, Louisiana, Guillory is most known for his eight-year run on Image Comics’ New York Times Bestselling Chew. The book went on to achieve much success, winning two Harvey Awards (including Best New Talent for Guillory), two Eisner Awards, as well as being translated into a dozen or so languages. Guillory is also currently writer/artist on his hit creator-owned series Farmhand from Image Comics.

“I pictured Mosely as the summer action blockbuster I’ve always wanted to write. But when I put pen to paper, Marvin Mosely had bigger plans. Turns out Mose was such a huge character that this story had to grow to epic proportions just to contain him,” said Guillory. “He’s maybe the most unlikely savior of the world in comics today. And you’re gonna completely fall in love with the old bastard.”

Sam Lotfi is a comic book artist living in Austin, TX.  He’s best known for his work on Mosely with Boom! Studios, Alfred: Pain in the Butler with DC Comics, and Last Stop on the Red Line with Dark Horse Comics, as well as other work for DC, IDW, Dynamite & 1First Comics.  You can find Sam on Instagram @slotfi.

“I’m thrilled to be telling this story with Rob. It’s always a joy to create characters and a world from the ground up and even more fun to watch those characters collide! I found myself making sound effects out loud while drawing this book, that’s how fun the world of Mosely is!” said Lotfi.

“The false gods of technology have NOTHING on Mosely in this exciting new sci-fi series that pits a singular individual against all of the corrupt corporate powers of Big Tech,” said Sierra Hahn, Executive Editor, BOOM! Studios. “Of course, being the creative geniuses they are, Rob and Sam make this a fun, action-packed, and extremely entertaining thrill ride, so get ready for big boss fights and a peek into a futuristic society that challenges our own relationships with our devices!”

Mosely is the newest release from BOOM! Studios’ eponymous imprint, home to critically acclaimed original series, including BRZRKR by Keanu Reeves, Matt Kindt, and Ron Garney; Something is Killing the Children by James Tynion IV and Werther Dell’Edera; Once & Future by Kieron Gillen and Dan Mora; We Only Find Them When They’re Dead by Al Ewing and Simone Di Meo; Eve by Victor LaValle and Jo Mi-Gyeong; The Many Deaths of Laila Starr by Ram V and Filipe Andrade; Basilisk by Cullen Bunn and Jonas Scharf; Alice Ever After by Dan Panosian and Giorgio Spalletta; Grim by Stephanie Phillips and Flaviano; Briar by Christopher Cantwell and Germán García; Stuff of Nightmares by R.L. Stine and A.L. Kaplan; and the upcoming Know Your Station by Sarah Gailey and Liana Kangas; Damn Them All by Simon Spurrier and Charlie Adlard; A Vicious Circle by Mattson Tomlin and Lee Bermejo; and Once Upon a Time at the End of the World by Jason Aaron, Alexandre Tefenkgi, Leila del Duca, and Nick Dragotta. The imprint also publishes popular licensed properties, including Dune: House Atreides from Brian Herbert, Kevin J. Anderson, and Dev Pramanik; Mighty Morphin and Power Rangers from Ryan Parrott, Mat Groom, Moises Hidalgo, and Marco Renna; and Magic from Jed McKay and Ig Guara.

Print copies of Mosely #1 will be available for sale in January 2023 exclusively at local comic book shops (use comicshoplocator.com to find the nearest one) or at the BOOM! Studios webstore. Digital copies can be purchased from content providers, including comiXology, iBooks, Google Play, and Kindle.

For continuing news on Mosely and more from BOOM! Studios, stay tuned to www.boom-studios.com and follow @boomstudios on Twitter.