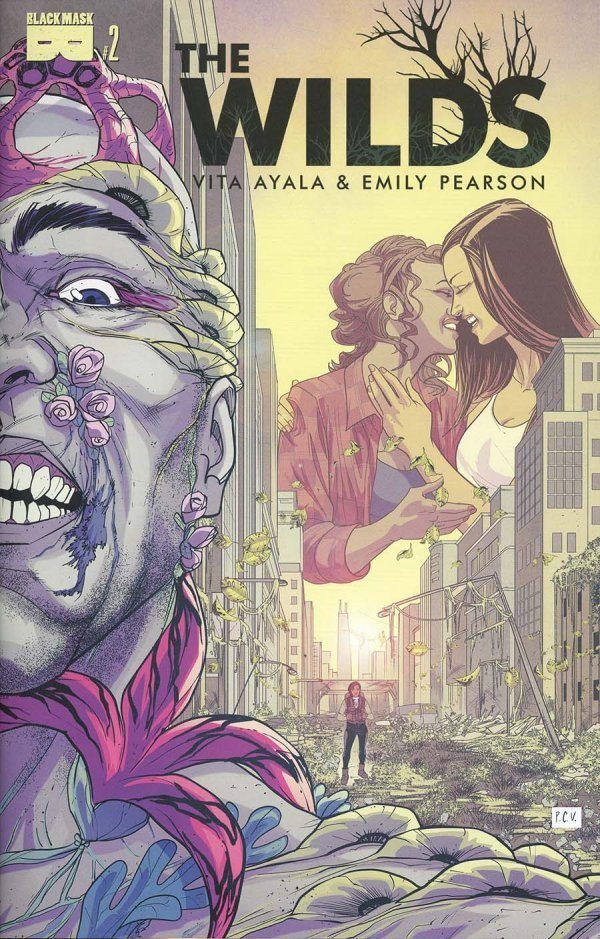 You’ve read the first issue of The Wilds, right?

It’s this brilliant and well paced post-apocalyptic floral horror comic from Black Mask Studios with a creative team that I want to see more from. I’ve always loved zombie and infection/outbreak stories as they can give us some of the best narratives of human survival and what happens to us with the breakdown of human civilization.

One of the reasons I was drawn to this particular comic was for the twist to the zombie genre–a flu virus turns folks into whatever passes for a zombie here, but the virus is helping Mother Nature reclaim her turf.

The virus is as beautiful as it is deadly. With flowers and leafage everywhere, the infected are walking blossoming centers that if they get their hands on you long enough can help turn you into something else.

Daisy Walker, the number one runner and person who goes on missions to fetch all manner of things, is back home at her compound with a slight problem: she brought back a stranger. Some guy named Teddy. Tensions are rising. Runners lose some freedoms. Folks are being sent for mandatory blood testing at the medical center. Daisy, who had a bit of a tiff with her lover, Heather, in the last issue tries to patch things up with the overbearing load on work on her shoulders. There’s a thread of other fellow survivors and some very shifty going-ons as we see a bigger glimpse of the hierarchy of this place which leaves some troubling questions.

I love the look of this comic: from the uniquely illustrated and colored people, to the fantastically done zombies, to the flashbacks, to Daisy’s majestic Mustang. Some of the action scenes come across as clunky; however, the pacing helps save this issue which is a stronger issue than its first. More characters, especially seeing more of the runners at the compound, expounds upon the system they work within in these last days of days and can add context to Daisy and Heather’s argument last issue. (Super refreshing to see some queer WOC not being one dimensional characters and seeing these layers with each issue. Also great to see them not hyper-sexualized and love on each other without the male gaze.)

This second issue of The Wilds works on what drew us in for the first issue and keeps working up the bar. I’m very interested in seeing the creative choices that push this comic into stellar category soon as it’s very clearly on its way there.

7.9 Excellent Choices of Nina Simone Songs To Run Down Zombies In A Mustang In Out Of 10