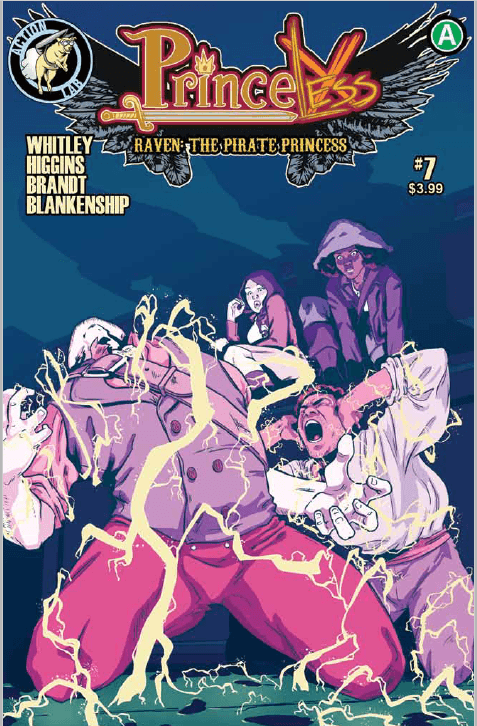 As my colleague Carrie said in her review last month, our crew of girl pirates are in the big leagues now! If by “big leagues” we mean they are now tough enough to be a threat to other pirates. With issue #7, Whitley and his artist team have crafted an issue that is essentially not 1, not 2, but 4 combat scenes that run the entire length of the comic. The images and dialog weave in and out without a break, with each team, and indeed each character, having a defining moment. It is a lot to take in, but the end is so satisfying you don’t mind that you get there feeling a little breathless.

While I love Whitley’s work as always, I think the artistic team makes this issue. The variety of facial expressions, body types, fighting styles… I mean, every detail comes together delivering an entire crew of pirates that are distinct and instantly recognizable. It is as fun to look at as it is to read. Shout outs to the whole artistic team: pencils by Rosy Higgins, inking by Ted Brandt, coloring by William Blankenship, and lettering by Dave Dwonch.

Now, on to the comic as a whole. First there’s team Raven, who has been ambushed while buying a lead at an information seller called Gut Feelings. They put up a great fight facing someone so fast, they literally can’t be seen.

Second, there’s Team Katie, in another part of the market buying supplies. Poor Katie, tough and kind as she is, is a little too trusting of the merchant and allows herself be trussed up, leaving her brave but inexperienced team on their own.

Eventually Melody, who just wants hugs, does find her fighting stance in defense of her friends. And you’ll just feel so proud when she does!

Third is Team Ximena… they don’t go down easy. They’re facing off against a mouthy bunch of pirates, giving Whitley a chance to display some of his trademark humor and social commentary.

Note that it is other dudes who correct the sexist statements of the dude bro with the funny hair cut. Whitley consistently brings these male characters into the light to be shunned and punished for their bad behavior. In his world, there are plenty of sexist men, but they all get their comeuppance sooner or later. In his world, you know the girls are going to win.

Jayla, though she may be a sheltered brat, is in her element in the apothecary’s shop, surrounded by chemicals and reagents that only she knows how to use. With the other girls buying her time, she thinks fast and takes good advantage, knocking out all of the pirates and giving them a head start back to the ship.

Which brings us back to Team Sunshine, where the reluctant babysitter has made some peace with snarky Desideria, so they can team up to kick the living snot out of their attackers. While next door, Cid and Amirah, the two most seemingly harmless members of the crew, have their adversaries well in hand. 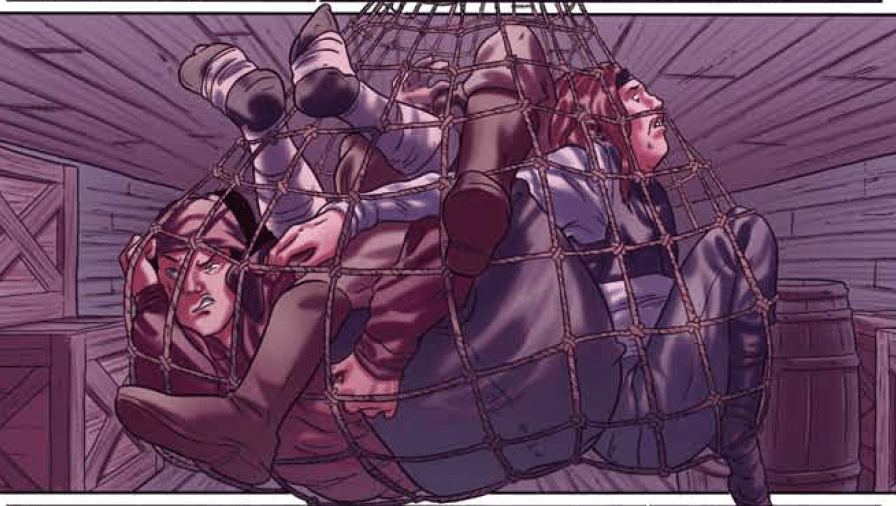 I must say, Cid and Amirah are quickly becoming some of my favorite characters. Cid, the cook, is a skilled tinkerer who seems to be able to build anything. She is deaf, communicating with Amirah through sign language and lip reading. Amirah, the ship’s quartermaster, dresses modestly and wears a headscarf. Together, they are a formidable team. Not only do they round out the crew with their different backstories, appearances, and skills, but they do so in a way that is informative and empowering.

There’s no doubt that Raven has collected a surprisingly capable crew that is entertaining to follow even when she’s not on the scene. Now to see what they can do when faced with their first real test in Free Woman’s Castle.

8 Roundhouse Kicks out of 10

Are you reading Raven: The Pirate Princess? Need to catch up on past reviews? Find reviews of other issues here.