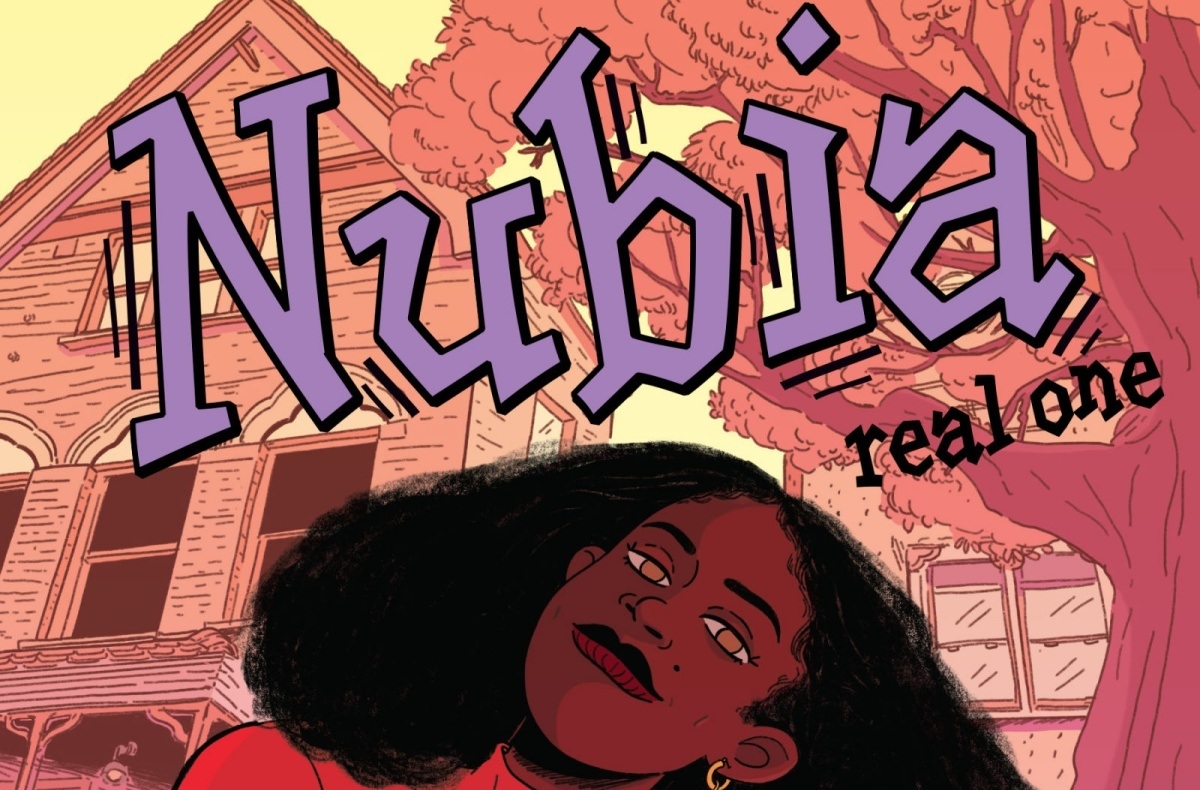 Nubia: Real One is one hell of a story. Written by L.L. McKinney and Illustrated by Robyn Smith, these two creators depict the raw insecurities and deep-seated fears of a dark-skinned, Black teenage girl coming of age in a world where superheroes are lauded and also slightly feared, as they fly through the sky. This creative team brought us a fresh spin of an older comic book character who has been on the sidelines for too long. I knew that this graphic novel centered on a widely misunderstood woman, mostly seen as rival and challenger to her twin sister, Wonder Woman: Nubia. I ended up blown away with this narrative that re-imagines Nubia as a teen girl who struggles and thrives. This is a graphic novel that is as timely–it tackles issues young people are experiencing today along–as it is a heartfelt journey that I’ve reread again and again.

Can you be a hero…if society doesn’t see you as a person?

Nubia Johnson is trying to get through the pains of high school. She wants to please and respect her parents while also reveling in the wonders of life with her two caring and playful best friends. However, Nubia has a gigantic secret: she can lift cars and move faster than the eye can see. Her powers have cost her and her family stability, and because of this, is determined to stay out of the spotlight to preserve any semblance of normalcy. However, how can she remain silent when injustice happens right in front of her?

God, this story was beautiful. From the first page I was HOOKED. I know, I know, that may sound like an exaggeration, you have to understand that from the beginning, this entire story just pulls you inside of itself. It starts off very nonchalant, very high school girl deals with overbearing parents and finding ways to talk to her crush. Nubia is shy, cautious, intelligent, and caring. Her family and her two best friends represent two kinds of worlds to her, and she can’t stand to be in a position that could harm either one.

Out of nowhere, it SLAMS into the hero arc, and I LOVED it. Pop culture and media is inundated with superheroes these days; despite that environment, Nubia: Real One soars on its own. It is the perfect book to share with almost anyone, but especially teenagers. It connects so many different aspects of what life is like for a Black teenage girl coming to terms with the realities of her world. It blends fantasy and other-worldliness with issues facing many Black people today, which includes police brutality, anti-Black racism, hyper-sexualization, and racial surveillance.

This is both an origin story of Nubia and a self-contained arc of a young superhero navigating life with a secret that could destroy everything she holds dear. The illustrations are superb; Robyn Smith and the associated colorists outdid themselves. It was the combination of warm, inviting colors and endearing characters that first drew me into the panels and subsequently, into this world. I do not want to give away too many spoilers, but there is one page that made think it was an homage to Sailor Moon. IT WAS JUST SO BEAUTIFUL, OKAY? I loved it. I love this book. I love how it made me feel. It elicited feelings of joy, heartache, anger, excitement, and above all, hope.

Just as a heads up: This story does include depictions of police brutality, attempted sexual assault, and racial violence. There is also some swearing. The graphic novel’s intended audience is for YA, for the fourteen to eighteen age range. As young people around these ages may very be intimate familiar with such topics, yet let this be a note for caution and trigger warnings. Please be advised if you decide to read it, but I strongly recommend this book to educators and librarians to add to your curriculum and collections. Nubia’s story is a glimpse into lived experiences shared by people all over the United States, and is a vital story that needs to be heard, seen, and uplifted.

Nubia: Real One is available in stores and where books can be found online.

Read more about the book here!

L. L. McKinney is an advocate for equality and inclusion in publishing, and the creator of the hashtag #WhatWoCWritersHear. Elle’s also a gamer, Blerd, and adamant Hei Hei stan living in Kansas. Her works include the Nightmare-Verse books, starting with the A Blade So Black trilogy, the upcoming Marvel’s Black Widow: Bad Blood as presented by Serialbox, Broken Wish of the Mirror novels by Disney, and the Jane Eyre reimagining Escaping Mr. Rochester.

Robyn Smith is a Jamaican cartoonist currently based in NYC. She has an MFA from the Center for Cartoon Studies and has worked on comics for the Seven Days newspaper, College Humor, and The Nib. She’s best known for her auto-bio comic The Saddest Angriest Black Girl in Town and for illustrating Jamila Rowser’s comic Wash Day. Besides comics she spends most of her time watching American sitcoms and holding on to dreams of returning home, to the ocean.