While it’s been exactly a year since the last time we witnessed the battle for the karate soul of the Valley, all of maybe two seconds have passed between Cobra Kai season 3 and season 4. Our very first scene features the vague profile of an aged Terry Silver getting the call to action from John Kreese, and the second scene picks up from Miyagi-Do and Eagle Fang’s joint practice with a simple “Ready / Let’s begin” (appropriately, the title of the first episode).

The premise of the fourth season of Cobra Kai is the much-anticipated team up between Johnny Lawrence and Daniel LaRusso as they recognize that their feud means nothing in the grand scheme of John Kreese resurrecting his brutal pedagogy and cultivating a cult of personality with a bunch of teenagers…again. After the absolutely brutal home invasion that capstoned last season, the dojos have agreed to a super tentative truce with the agreement to hash everything out at the All-Valley. To the victor, goes the spoils. To the loser, their dojo must shut down.

And thus sets the stage for what I will continue to argue is the best high school martial arts drama series that has absolutely no right being as entertaining as it is. I’ve been advocating for this series since the YouTubeRed era in 2018 and once they were handed off to Netflix, I have made it a point to proselytize to everyone on the good show that is Cobra Kai. After watching season 4, my position has not swayed me. If you can willingly suspend some disbelief over community reaction to karate-based gang violence (which I’m assuming if you’re three seasons deep, you’re reconciled with this already), you’re gonna enjoy the ride.

Cobra Kai season 4 feels like the narrative parallel to The Karate Kid, Part III. Season 1 was a modern recreation of the first Karate Kid, and season 2 and 3 acted as a prolonged narrative interlude that featured much higher stakes and a trip to Okinawa (albeit much shorter than the one The Karate Kid, Part II). With the All-Valley Under 18 Karate Tournament (gotta use the full name as a matter of respect) as the focal point for the season and the physical return of Terry Silver into the fray, season 4 is about new training regimes in preparation and grappling with a bunch of turbulent emotions in a way that hits all sorts of nostalgic notes.

There are many central themes surrounding Cobra Kai. Don’t let the past grudges define who you are in the present. Being aggressive doesn’t mean you need to be an asshole. Bullying is still a fundamental problem in society because children can be needlessly cruel, and adults don’t always know the best way to intervene. Balance is key. And all of these messages appear throughout the ten episodes, although I think that some of these points are belabored considering we’ve gone over them in thirty past prior episodes and three movies (five movies? You get the idea).

The keystone dynamic of Daniel LaRusso and Johnny Lawrence not seeing eye to eye on things at this point is beginning to run out of novel narrative space. Given that is the foundation of the series, it’s understandable if the folks behind the camera are worried about straying from what endeared us in the first place, but at times it’s almost as if they’re afraid to move past that and keep rehashing the same conflict over and over and over. But thankfully there are plenty of other character dynamics in play that open up the story to keep things interesting.

The extended Karate Kid universe has an impressively deep roster, and it’s clear that the ensemble have grown and matured together. However, it’s nice to know that the cast is still growing. In the interest of keeping things spoiler-free, I can’t explain exactly how these new characters complicate things, but I can at least be appreciative that the cast is slowly (very, very slowly) becoming a little more diverse. This increase in cast size though does come at the expense of some character development and much like Eli Moskowitz’s/Hawk’s sudden redemption in the season 3 finale, there are some…leaps that just happen. Nothing that feels like a dramatic departure, but it’s clear that some payoffs feel a lot better than others.

Throughout the ten episodes, some things that happen are incredibly predictable, but are exceedingly well executed. The twists that happen are perfectly placed and had me picking up my jaw off the floor in shock. The performances are fantastic, the fight quality is sublime, and the music soundtrack still on point.

There is so much to love about the series, and everyone involved has gone to great lengths to make sure that we’ll be able to spend ample time in the extended Karate Kid universe for a long time to come. I think season 4 does suffer a little from a slow start and repetitive arc, but the culmination of the All Valley Tournament is some of the finest sports drama you could ask for and the promise of Season 5 has me chanting “COBRA KAI NEVER DIES.”

Check out the reviews of previous seasons here. 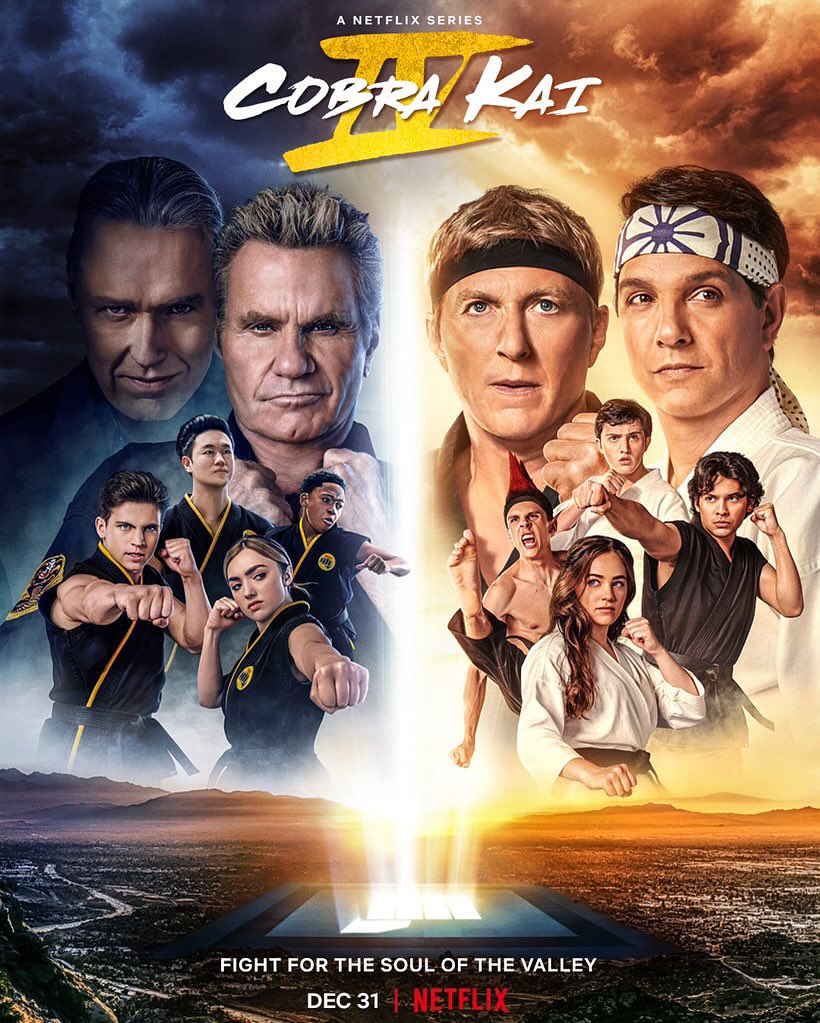