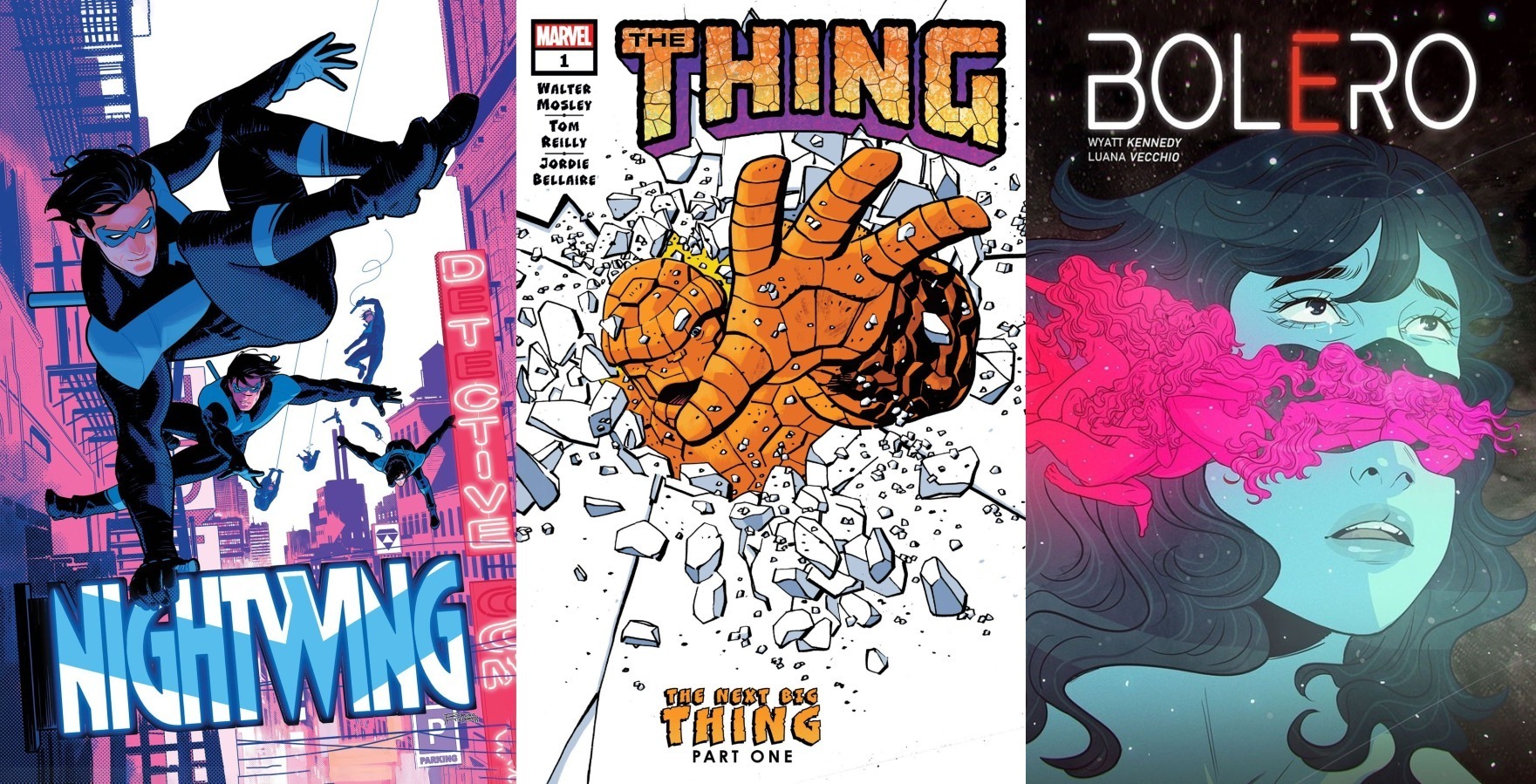 Despite the horrible state of the world, there is an insurmountable amount of content at the ready to be consumed. Just an egregious, impossible mountain of things to engage with. Escapism is always good, but when there are this many things to escape to it can be really daunting. We’re at the “want to watch something, but scroll through Netflix for an hour, then get tired and go to sleep” stage of content engagement. So that’s why I’m here. We’re gonna specifically talk about comics today, which is a medium in a true golden era for fantastic storytelling. But just like everything else, it can be hard to figure out where to jump in, and what’s worth your time. So strap in, and listen to me ramble about a few of my favorite comics of this year so far and dig into some of the craft elements that make them stand out to me.

Look, I love Nightwing as a character as much as the next fan, but there’s something truly special about this current run written by Tom Taylor and Bruno Redondo. Dick Grayson is dedicated to not just protecting the city of Blüdhaven as Nightwing but also ushering it into a new era of prosperity as Dick Grayson. My man is burning the candle at both ends in this one, but his smile never wavers, even with a new villain named Heartless who steals people’s hearts, or with Blockbuster trying to assassinate Dick at every turn.

I’ve said this many times over, but it really feels like an all-time, definitive run for the character and the entire creative team. We’ve yet to see a lot of Nightwing adapted into other mediums (which is a shame, to be honest), but when we do, there’s not a doubt in my mind that this Nightwing run will be mined for inspiration in a myriad of ways.

For starters, the thing that pulls me into every issue is how Taylor and Redondo put on a masterclass balancing act on providing levity and serious stakes that other comics miss at times. It is incredibly inspirational as someone trying to navigate writing in this field, and it’s really dope to see that these two seem to have such a symbiotic relationship. It elevates the book astronomically in my opinion. I can feel both of their equal agency in these pages, and I feel like more comics need to follow this approach.

Why You Need to Read it

I’ve talked in more detail about this Nightwing run before, but the aspect that’s my absolute favorite thing is the creative team’s dedication to Heart, Heat, and Hands. There’s heart at the middle of every story, absolute heat from Nightwing’s quips, and the hands of a fighter so skilled that sometimes it’s feeling like you’re getting your ass beat through the comic book page. But there’s been a fourth “H” that I’ve neglected to mention before, and that “H” stands for hope. Full stop, this is one of the most hopeful monthly Big Two comics on the shelves. It doesn’t shy away from the bleakness or the negativity of the world but opts to show us that there is a way through the existential dread or the nihilistic tendencies that so many find themselves drowning in. Issue after issue, I find myself full of hope, and I don’t even live in Blüdhaven.

I’m talking forever about this book, but I’ll just say one more thing. After more than ten issues into this run, I can safely say now that it’s incredibly paced from an individual standpoint, and as an overarching story. I can’t tell how long this particular run is planned out to be, but Taylor and Redondo do such a good job throwing twists and turns every issue that it doesn’t feel like an intentional wrench to stretch out the story just because. Everything feels really organic, and I honestly like that. It’s easy to telegraph where a story is going sometimes, but there’s never a point where I feel like I have to start to look ahead. Every time that even begins to happen in my head, there’s a turn in the story that sends us down a different direction. Nightwing really keeps its audience on its toes, and I’m not just talking about the yeeks.

So do yourself a favor, please. If you aren’t reading Nightwing, rectify that expeditiously. You’ll be mad at yourself for not jumping on this train sooner but happy with all the catching up you have to do.

The Thing: The Next Big Thing

Yancy Street’s very own pile of rocks is back in his own comic, and it’s an airtight, highly entertaining six-issue comic series. I know I just spent about 600 words gushing over the ongoing monthly masterpiece that is the Nightwing comic, but honestly, that book is an outlier for me. I’m at a point in my life where I can really appreciate a complete story. Get in, get out, and then reflect on how it made you feel.

That’s what we get from this recent run centered on Ben Grimm. Written by Walter Mosely, and Illustrated by Tom Reilly, The Thing: The Next Big Thing is a standalone story tucked somewhere in Marvel’s past where Ben is home alone at the Baxter building while the rest of the team is away on a vacation. He’s left to his devices, and gets into trouble with his girlfriend Alicia, and the law, landing him in prison. But something more nefarious is happening behind the scenes. The death God Mot seems to be manipulating things and making things difficult for our favorite pebble.

What really stood out to me while reading this story was how it read. In the first issue, it goes out of its way to inform the reader that this is a story that takes place sometime in the past, which really just told me that they wanted to tell a standalone story without having to pay too close attention to canon and current events of the other comics. Marvel doesn’t have Black Label like DC for stories like that, so I just thought this was a clever way to let us know upfront the level of connectivity that would be present (or not) in this story.

But what I found interesting was that the story also read like one of the comics of old. It had that somewhat over the top dialogue (even for The Thing), and the art and colors from Reilly really dug into that aesthetic from the Bronze Age. But with that, it didn’t lean into that aesthetic too hard. The structure of the story didn’t feel dated which was nice. I love old comics, but overwriting was way too common back in the day, so I’m glad this book didn’t have panels with nine pages, each filled with dialogue bubbles with 60 words.

It was also just dope to see The Thing in his element outside of the Fantastic Four. Often, that team has to lead on each other’s strengths to get the job done, and Ben was thrown into the fire without that crutch. It was fun to see how Moesely and Reilly navigated giving Ben obstacles in creative ways. It really helped with fleshing out the character and fleshing out his growth.

This was a character study through and through, and I love that for The Thing. It’s the main reason why I love self-contained stories. It can often be hard to see a character’s growth over the course of a fifty issue run. I know that sounds crazy, but it’s true. At least for me. With The Next Big Thing, Ben Grimm goes through an internal metamorphosis over the course of just six issues.

Like Nightwing, this book has a lot of heart as well. But at the center of it all, it’s a love story. I’m always here for a little bit of simpin’.

So if you want to read an old comic without reading an old comic, and see a pile of rocks smash things into smithereens while also progressing as a human being, this is the book for you.

Do you like to cry? I’m not talking about a single tear down your face and one sniffle. I’m talk snot dripping, swole faced crying so hard that may or may not feature a few loud and involuntary wails. You’re probably answering no to that question, but that’s because you haven’t read Bolero from Wyatt Kennedy and Luana Vecchio. Because after reading this book, you’ll feel like you’ve been emotionally gutted and deep cleaned, in the best way possible of course.

This was a book that was an easy sell for me. I love anything and everything about the multiverse, so with that in the logline, I was already in the bag. But I was not ready to feel as deeply as I felt while reading this. It hit me hard.

This is an incredibly vulnerable comic book, so know that going in. It’s going to make you confront some things about yourself, and it might bring up some painful memories. But I found it incredibly cathartic. Being heartbroken is one of the worst feelings you can feel, but it happens to be something that most of us have experienced, and seeing it conveyed in such a creative and inventive way can help you navigate parts of yourself you thought you’d locked way.

Aside from the tears, this comic book does an incredible job of having fun in the midst of the existential dread. Devyn (the protagonist) travels the multiverse, and gets to hang out in space, fight in medieval battles, attend Victorian balls, and hook up with anyone and everyone she so chooses. It’s a lot of fun, and Vecchio absolutely kills the visuals on the book. Each page is more stunning as the one right before it, which is hard to do when a book is five issues. I wouldn’t have cried nearly as hard as I did were it not for Vecchio’s art.

Whether you want to clean your tear ducts out or not, I still think you should read Bolero. You’ll feel better in the long run, I promise you.

There’s still an insurmountable amount of comics to read, and while reading this article, atleast a dozen new comics have dropped, but I hope you’ll give these three a try, or at least put them on a list to prioritize. You won’t be disappointed.