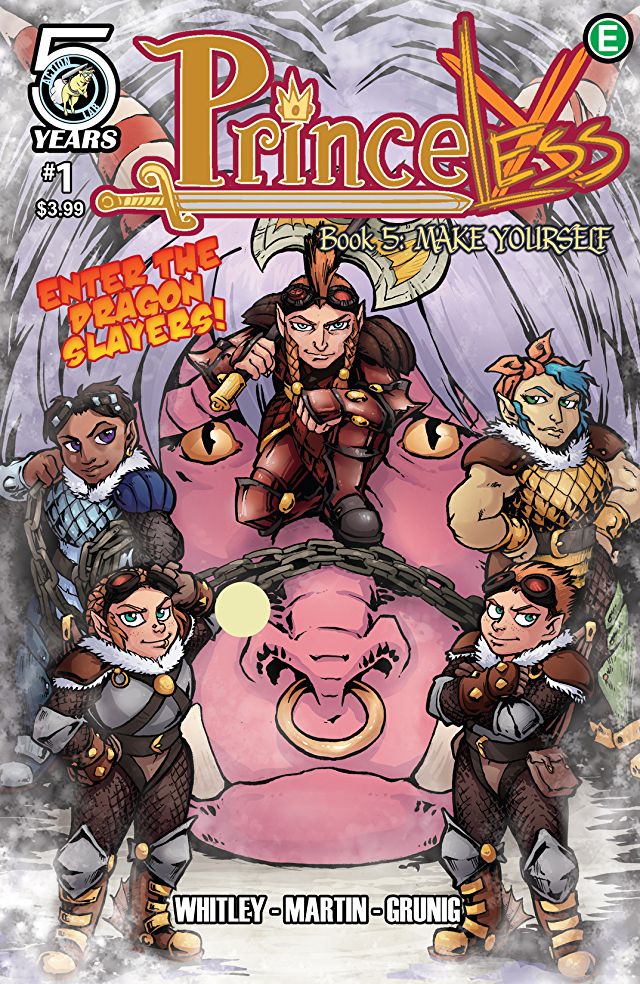 [dropcap1]F[/dropcap1]irst Things first, it’s been a while since an issue of Princeless dropped so take a minute to refresh yourself with the previous issue with guest artist Alex Smith which was ICONIC. Second, Happy Birthday Action Lab Comics! Happy Five Years In the Bussiness! Thanks for bringing some great comics to the table!

This issue begins with some characters that I haven’t seen in a while that I have missed: Kira and Prince Devin. Devin, Adrienne’s younger brother is a sensitive boy who the King keeps trying (and failing) to mold into his mini-me. Kira is the fierce young shape-shifting wolf daughter of one of King Ashe’s oldest allies. In previous issues back, the two were sent out together on a quest and they work as great foils against each other inciting some laughs and hilarious reactions from their horses.

But the real party doesn’t start until the dwarves walk in and these ladies steal the show. An all female dragon slaying dwarf squad that’s full on talent, fresh one-liners and other surprises that reveal themselves later in the issue. (I feel like betting money that Gimli would claim them as his kinfolk)


[divider type=”space_thin”]
We do see Adrienne and Bedelia but they aren’t the main stars of this issue which is fine–the story continues to weave itself forward with the introduction of newer characters–An ELF, another Prince and some interior motives and silly boys getting their butts handed to them by girls.

This is a fun issue high on Whitley’s sense of humor that we’ve grown to recognize and love and full of art that is distinctly Martin’s style and full of all the great faces and details that you’ll love. I can’t wait to see our favorite Princess rock her new hair style come next issue!