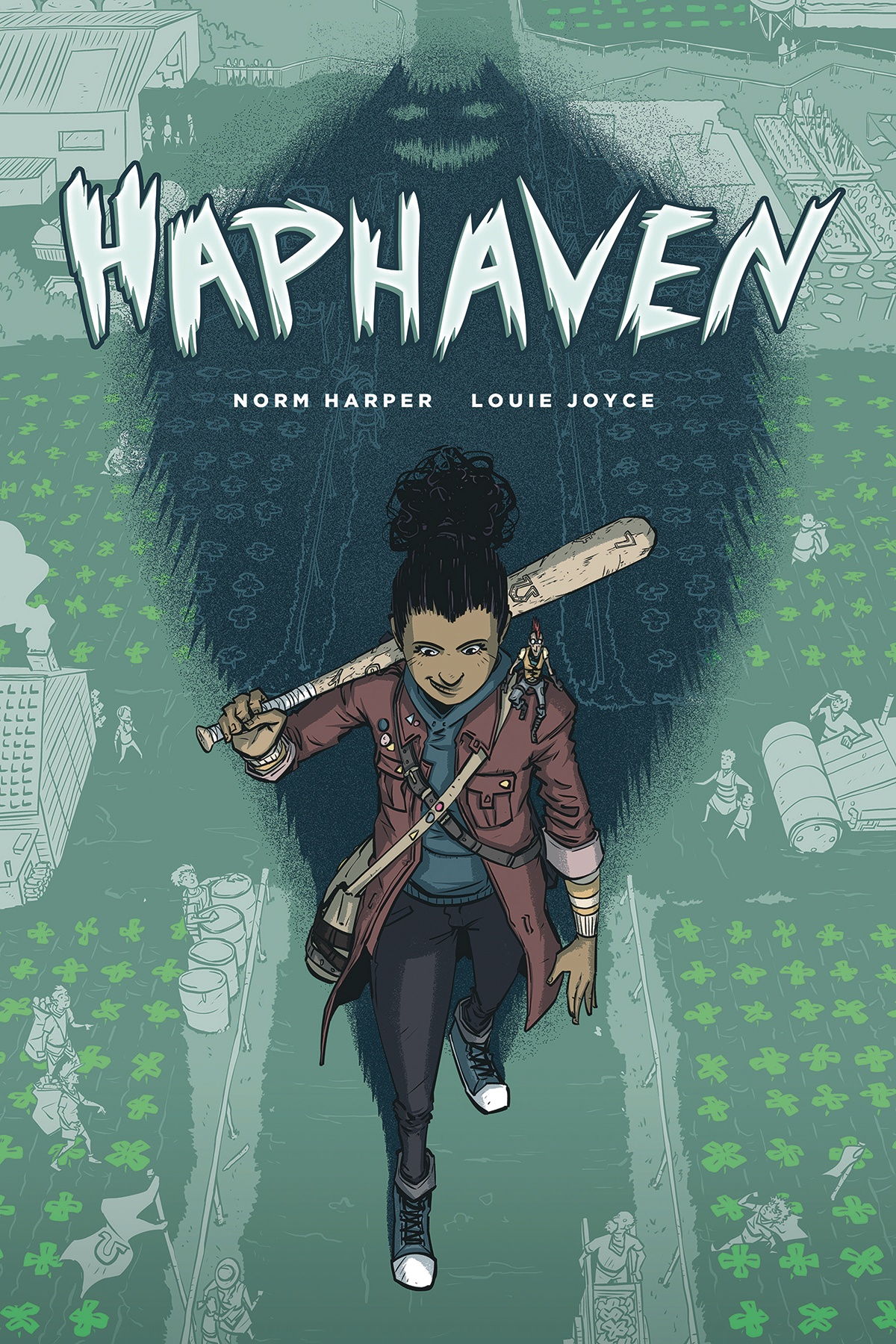 Step on a crack / Break your mother’s back

How superstitious are you? Super superstitious? Maybe just stitious? But have you thought about all the familial traditions, the stories we share generation from generation, the odd habits we pick up because it has become engrained in your being, your very core? Have you thought what it would be like to confront both history and fantasy? Well thankfully Harper and Joyce have you covered with their latest graphic novel, Haphaven. 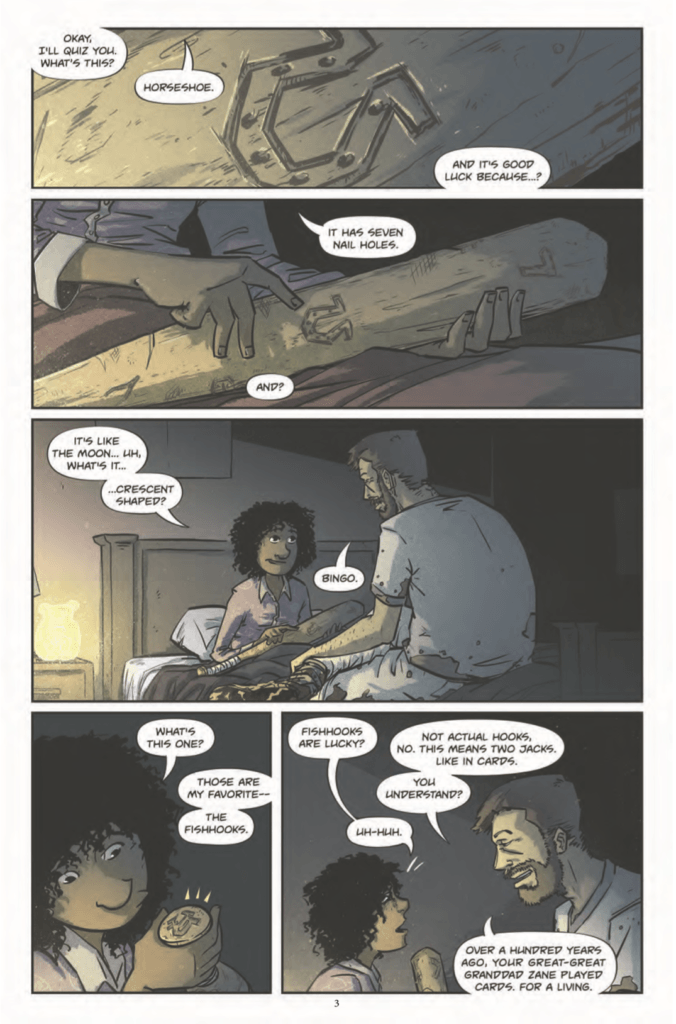 Haphaven tells the story of Alex Mills, who (among other things) is the exceedingly superstitious daughter of a baseball player and descendent of a famed gambler Zane who never lost a card game as long he had fishhooks (a colloquial for holding two jacks). All the exposition is told brilliant in the opening prologue of the book before we pivot to the story. Alex lost her father due to a terrible accident due to a terrible storm, and she and her mother are still adjusting to the new status quo years after the fact. Before long though, a childhood rhyme proves a little more dangerous than anyone could believe and Alex’s mother breaks her back. When a little leprechaun shows up and offers a chance to save her mother Alex all but leaps at the call to go to a fantastical world of Haphaven armed with nothing but a baseball bat and her wits. 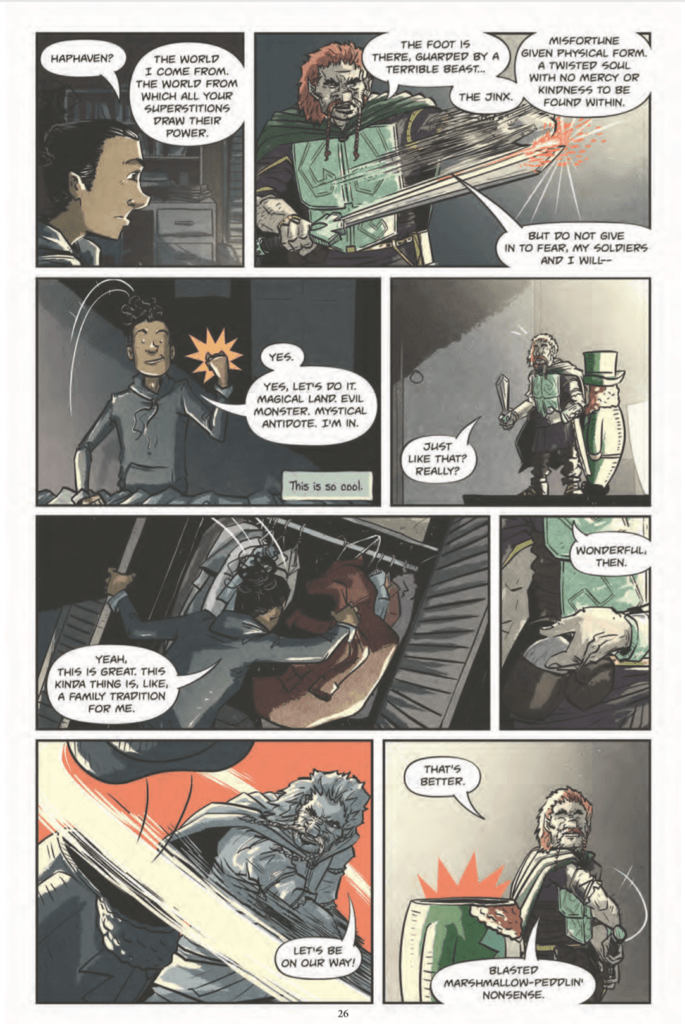 And thus sets the stage for the graphic novel. Told in five chapters, Haphaven follows your conventional structure for your coming-of-age novel where a young teen has to embark on a great quest with vast implication on both a personal and world encompassing level. While overexcited teen excitedly accepts the call to action isn’t the biggest variation on the formula, Harper and Joyce do manage to make their story has its own unique charm. Haphaven is sort of a mid-fantasy world, it lacks the dragon and antics of sorcerers and wizards but being the source of all power for all of Earth’s superstitions also means that we’re not dealing with a world that is scarce in magics and magical creatures. You have airships piloted by leprechaun crews, talking animals, and some monsters unique to the world. Plus, Alex Mills is a biracial (half white, half black) protagonist and since representation matters literally every day, it’s always nice when these stories don’t default to your typical white male teen. It also helps that Harper helps flesh out the world both through anecdotes about Alex’s ancestor Zane that help create a sense of grandness of the story and including a textual history of the land with each chapter.

Couple the well thought out worlds of duality with equal compelling visuals naturally leads to a home run. Joyce’s artwork is playful and joyful when it wants to be, while also nailing quiet and somber moments of the narrative. There is almost a filter-esque effect when reading the pages, and it’s immediately recognizable if you’re in the past, present, real world, or Haphaven. The deviation in color and artistic style given Haphaven a unique sense of flair that aids with the whole story telling experience. It is a wonderful harmony between Harper and Joyce that manage to capture a wide spectrum of emotion. 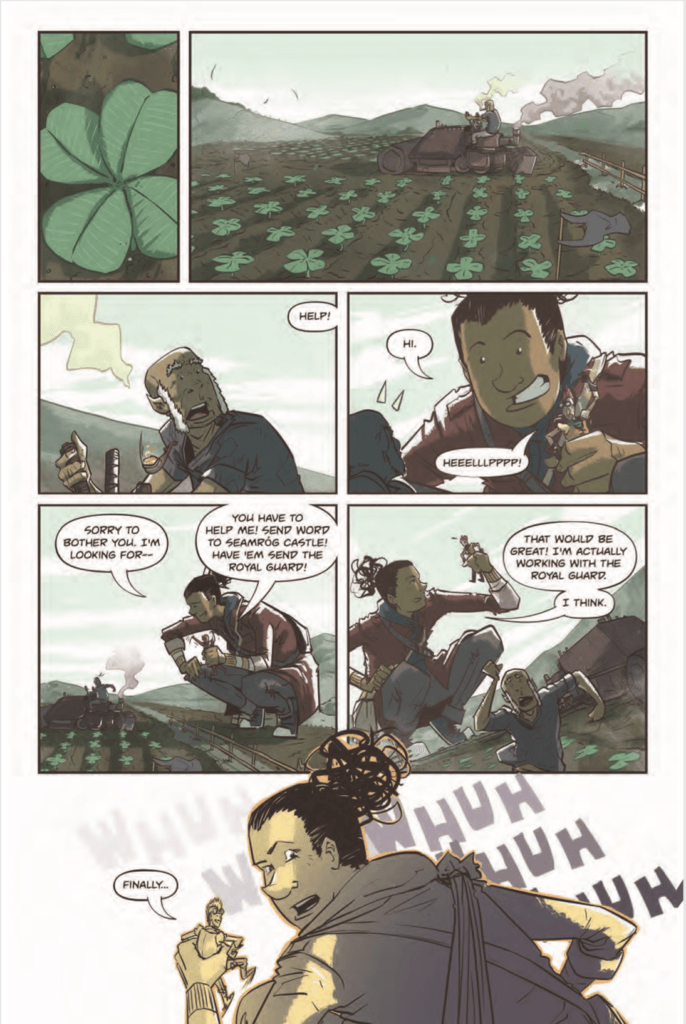 Haphaven is a story about superstition, but it’s also a story about family. More specifically, it’s a tale about the reasons why we give power to superstition and the traditions they embody. It’s a fun read and great introductory graphic novel with a compelling hook and look that makes it s a safe bet for purchase when it comes out March 6th.

It's a lucky day at Lion Forge! We got early copies of Haphaven by @ThatNormDude and @LouieJoyce in the office! Get yours 3/6 ☘️ pic.twitter.com/5LPA7BFyTx