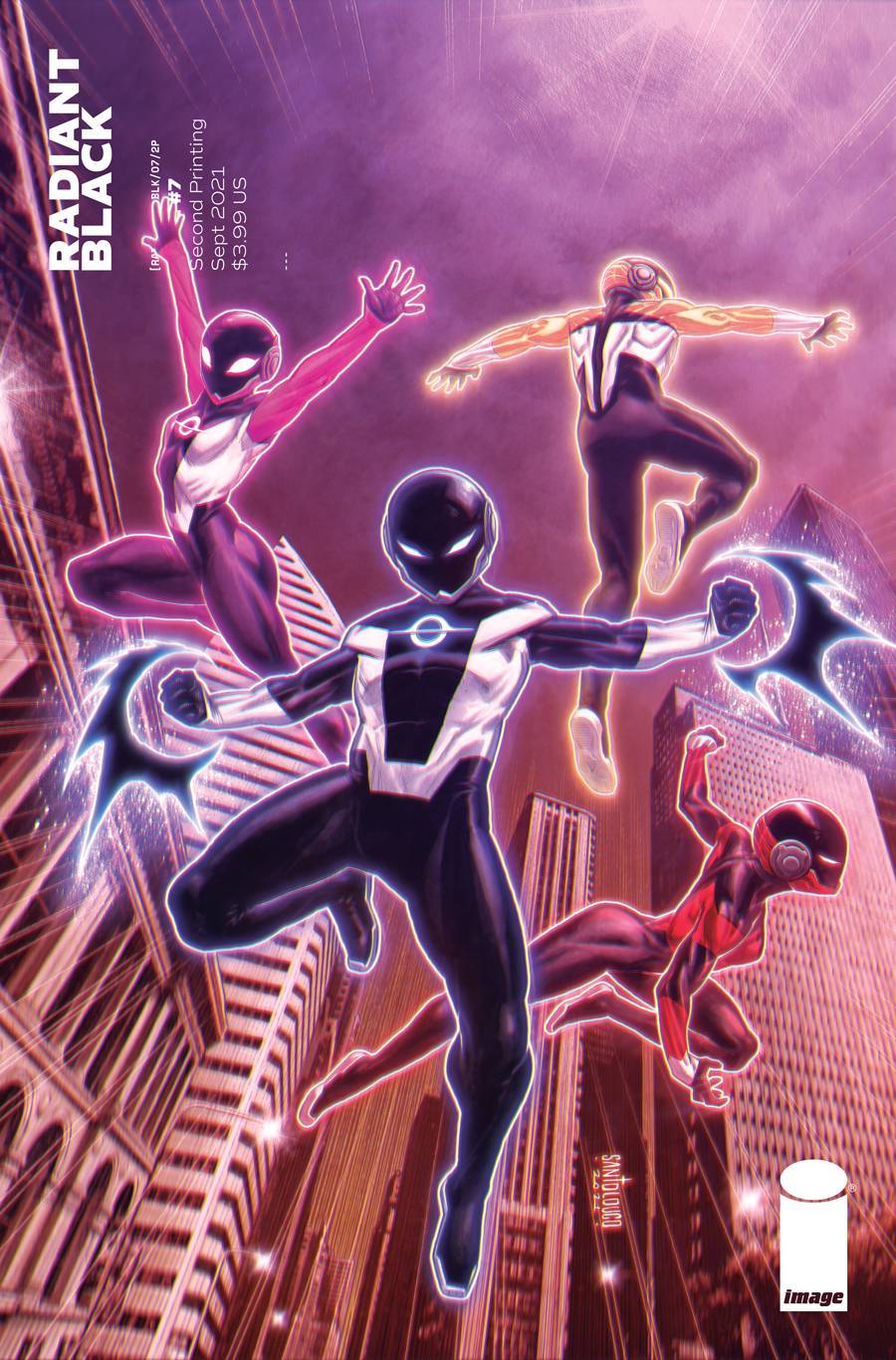 You read comics, right? Of course you do. You wouldn’t be here if you didn’t, or maybe you would, I don’t know you like that. Either way, comic books are at the forefront of pop culture right now whether you realize it or not. Though, I guess it would be hard not to realize it. Countless movies, television shows, and video games are out there adapting famous comic books. The staple of most of them? A symbolic superhero. We’ve got Superman from DC, and Spider-Man from Marvel. These characters represent a staunch moral compass that almost never wavers. They’re the best of us and are a beacon of hope for us to strive for, but they’re also owned and operated by mega-corporations, so variety, in the long run, can be hard to come by.

What happens when you have a superhero universe where you aren’t hindered by the agendas of a larger company? Well, you get the Massive-Verse from Image Comics.

At this point, the Massive-Verse spans four titles, with an OGN coming later this year pushing that number to five. Debuting with Radiant Black, from the creative team of Kyle Higgins and Marcelo Costa, it follows a down-on-his-luck writer who gains gravitational powers from a tiny black hole. The Massive-Verse has continued to expand and fill in the void of that original series with an entire multiverse of stories and possibilities. It’s truly inspiring.

The Massive-Verse is stylistically reminiscent of Power Rangers, where Kyle Higgins formerly revitalized that franchise in the comic book medium. From a narrative standpoint, as stated by the elevator pitch on the back of the book, fans of Invincible will love it.

I’m here to give you some more insight into why you should take a deep dive into this superhero universe if you haven’t already. You won’t regret it. Well, you might regret reading this, but you won’t regret checking out the Massive-Verse.

As I stated before, it’s no secret that a lot of the Massive-Verse is aesthetically inspired by Super Sentai and Power Rangers. Kyle Higgins spent years reviving the Power Rangers franchise for American audiences by taking the characters we all fell in love with in the ‘90s and adding depth and nuance to them. In addition to that, he crafted a story spanning the multiverse, linking multiple eras of Power Rangers under the same umbrella. It’s absolutely incredible stuff.

But like those money-hungry companies I mentioned before, Power Rangers is an IP licensed through Boom! Studios and owned by Hasbro, formerly Saban. With that, there was likely a lot of hindrance on what the story could and should be, and outside marketing materials like toys and games, all provide money for the companies, not so much for the creators who worked on the books.

When you read Radiant Black, the flagship series of the Massive-Verse, the inspiration is apt, all the heroes have the dopest-looking helmets you’ve ever seen, and they all have different colors that denote their powersets and abilities. But most of the similarities stop with the visual elements. The Radiants aren’t a teenage crime-fighting team like the Power Rangers are. They have wide gaps in age and at this point you could barely call them a team. It would be a stretch to say that any of them particularly like each other. Instead of banding together and answering the call like people with an unwavering moral compass would do, they are stumbling mightily through what it means to be a hero, and what their place in the world should mean. That type of depth is what makes these heroes so fun to engage with. The Supermans of the world definitely have their place, but the Radiants show a more grounded and realistic take on what the burden of power looks like, simply because they are regular people.

Speaking about the burden of power, the different types of powersets for each of the Radiants have been so fun to explore over the course of the different series, and in their own way, they kind of inform what the characters are going through.

The aforementioned Radiant Black has gravitational powers, meaning he can fly and lift and move things with ease. Radiant Red has density absorbing and redistributing powers. She often absorbs matter and uses it to create armor around herself, which is really dope. Radiant Yellow can mess with time, and Radiant Pink can manifest and jump through portals, seemingly to anywhere.

These are some powers rooted mostly in the laws of the universe, and they’re now bestowed upon some scared humans with shitty lives. That’s a recipe for disaster, and I’ve got my popcorn fresh out the microwave.

My favorite part of these books is that while the Radiants might be heroes, they are deeply, deeply flawed. They aren’t symbols for morality like a lot of Big Two comic book characters are. They are representations of real people and how they would act if suddenly they had a fundamental universal power at their beck and call. Because of that, these characters are much more shades of gray than they are black and white. They might want to make sure the world doesn’t end and will do whatever it takes to stop that from happening, but when that’s not happening, it doesn’t necessarily mean they’re running patrol and fighting crime all the time.

They use these powers to their advantage, just like most people would. Your friend is in a coma because a building fell on him? Well with these powers, you can make those responsible pay. You’re about to lose your home because your husband is a gambling addict and washed away all his money? Time to rob a bank for 2.5 million dollars.

These are just a handful of the things the Radiants have done in their spare time. They aren’t necessarily good people, but they’re trying. It makes for an incredibly engaging read.

Almost all of the main characters in this universe were not initially the main characters. Without going too much into spoiler territory, Kyle Higgins and co. do such a good job of rooting us into a particular character’s story, giving us a reason to cheer them on, or want more from them, and then lifting the rug from underneath us and going in a completely different direction. At this point, it’s happened three times, and each time is just as brilliant as the first.

It can be hard to be original in storytelling, but somehow, the Massive-Verse continually finds new ways.

At San Diego Comic-Con, I sat at a Massive-Verse panel put on by Kyle Higgins and other creative teams featuring Cherish Chen, Melissa Flores, Ryan Parrott, and Mat Groom, and for the first time, I was able to see just how large the scope of this universe is. For lack of a better term, it’s… massive.

Radiant Red, from Cherish Chen, David LaFuente, and Miquel Muerto just concluded its first volume. The story follows an angry schoolteacher whose roped into using her Radiant powers to pull a heist.

Aside from the Radiant-centric books, we also have Rogue Sun, from the creative team of Ryan Parrott and Abel. It spins out of the Supermassive event from earlier this year, that gives us our first glimpse into some of the supernatural sides of this universe. Instead of a tiny black hole, Rogue Sun gets his powers from the sunstone gem, and he fights a lot of ghouls, werewolves, and vamp-like creatures.

We’ve also got Inferno Girl Red, who is also from the Supermassive event book. We know a little less about her, but we do know that she’s from another universe. Her story will be explored more in an OGN from Mat Groom and Erica D’Urso due out late this year.

The newest series to debut is The Dead Lucky, written by Melissa Flores with art from French Carlomagno, and it’s coming out this week. It follows a veteran with PTSD and electrical powers who comes home to find a tech company encroaching on the civility of its citizens in the name of peace. She also wears a dope luchador-esque helmet. Man, helmets are so cool.

I was sitting in that audience in awe. Not only are these books so good, they’re also so personal, and you can see it in the creative teams. All of this falls under the umbrella of Kyle Higgins’ initial brainchild, but he’s giving other creators the chance to tell stories with meaning within this universe. And at this point, some of these stories are only tangentially related. Some, seemingly not at all. Maybe they will be at some point, but even if they don’t that doesn’t change the richness of the story.

Creating comics for the Big Two isn’t that easy, and that’s not to knock those companies. It all depends on what you want as a creator and what you want as a fan. For big companies, oftentimes, creative decisions or ideas get bogged down or blocked because topics might be too sensitive to tackle wholeheartedly. That’s not the case when you run your own world.

So if nothing else convinces you to check out the Massive-Verse, that should. Story, character, and personality take precedent in all of these stories. The flash and awe are just the cherries on top.