If the name Craig McCracken does not immediately register in your head, the titles he worked on certainly will. The cartoonist behind The Powerpuff Girls, Foster’s Home for Imaginary Friends, and Wander Over Yonder has undoubtedly been as influential to many of our childhoods and his influence will persist into the next generation of young minds with his return to the superhero genre, Netflix’s Kid Cosmic.

Kid Cosmic’s premise feels like a riff on Green Lantern’s origin story, as the action precipitates off a bunch of powerful cosmic objects falling to Earth. Our protagonist, affectionately referred to as ‘Kid’ by others and self referentially as Kid Cosmic, manages to find these artifacts and (being particularly well-read in all things comics) begins to channel his knowledge into becoming an actual superhero.

Freakin’ out? Breathe it out.

As the lovingly illustrated comic book covers at the end of the episode indicate, Kid Cosmic is a serialized story that tells a coherent story over its ten-episode season. The inhabitants of the drive-by town in the desert of New Mexico include Kid’s grandfather, Papa G, Kid’s neighbor, Rosa, and the workers and regulars at a cozy little diner, notably Jo, the teenager who wants nothing more than a little more excitement in her life. Jo’s wish is granted pretty much immediately as she becomes the first person to join Kid Cosmic’s team in the pilot.

The narrative is sweet and endearing, with a lot of emphasis on what it means to be heroic and, appropriately enough, how “real life isn’t comics.” Kid’s personal journey is the centerpiece and focal point of the show, but this is a superhero ensemble and the other characters get a lot of touching moments and chances to shine. Jo’s adventures in babysitting provide a plethora of side-splitting moments. Rosa’s antics constantly brought a smile to my face. Papa G’s positive parental influence and moments of mad science are defining aspects of the series. Even Tuna Sandwich, the diner cat, has several moments of awesome that drive the story forward.

It’s very much Kid’s story, but it’s not just about Kid. It’s about the town. It’s about the larger mystery behind the cosmic stones. It’s about the various shenanigans that happen when you give a hyperactive preteen the ability to fly and his ragtag bunch of misfits portal magic, sizing changing, cloning, and precognition.

There are big props in the order of McCracken and Mercury Filmworks. The retro-aesthetic of the animation looks beautiful. The desert set pieces are magnificent as are the alien ships and aliens that show up periodically throughout the series. The designs are familiar and iconic, and Stuck Chuck, (the first alien character our lovable cast encounters) is this perfect injection of sardonic humor and camp that sets a large standard for the rest of the series.

It’s a stylistic triumph and crucially, it leverages the medium in clever ways to accentuate various moments of both drama and comedy. In a similar vein to how comics are able to capture specific moments in a panel, Kid Cosmic uses its ability to control framerate, filters, and pacing to make memorable sequences. The tempo of each episode is masterfully done and it makes it very easy to consume either in individual episodes or in a long extended sitting like a mini-super hero movie.

And the voice acting is just delightful. Jack Fisher is a wonderful voice for Kid, able to capture the enthuasium and frustration of being a youngin’ who constantly aspires to be more, and he acts wonderfully excellent Amanda C. Miller’s ‘Jo’, Lily Rose Silver’s ‘Rosa’, Tom Kenny’s ‘Chuck’, and Keith Ferguson’s ‘Papa G’.

Kid Cosmic is an absolutely wonderful addition to Netflix’s library, to McCracken’s filmography, and to animation in general. This is the pinnacle of excellent storytelling and cartooning, a prime example of how to leverage an innate understanding of trope and how to lean into, subvert, and elevate it into fantastic storytelling. Kid Cosmic embodies the exact type of energy I think we should all be carrying into 2021 and I can not recommend it enough. Catch it when it hits Netflix on February 2nd. 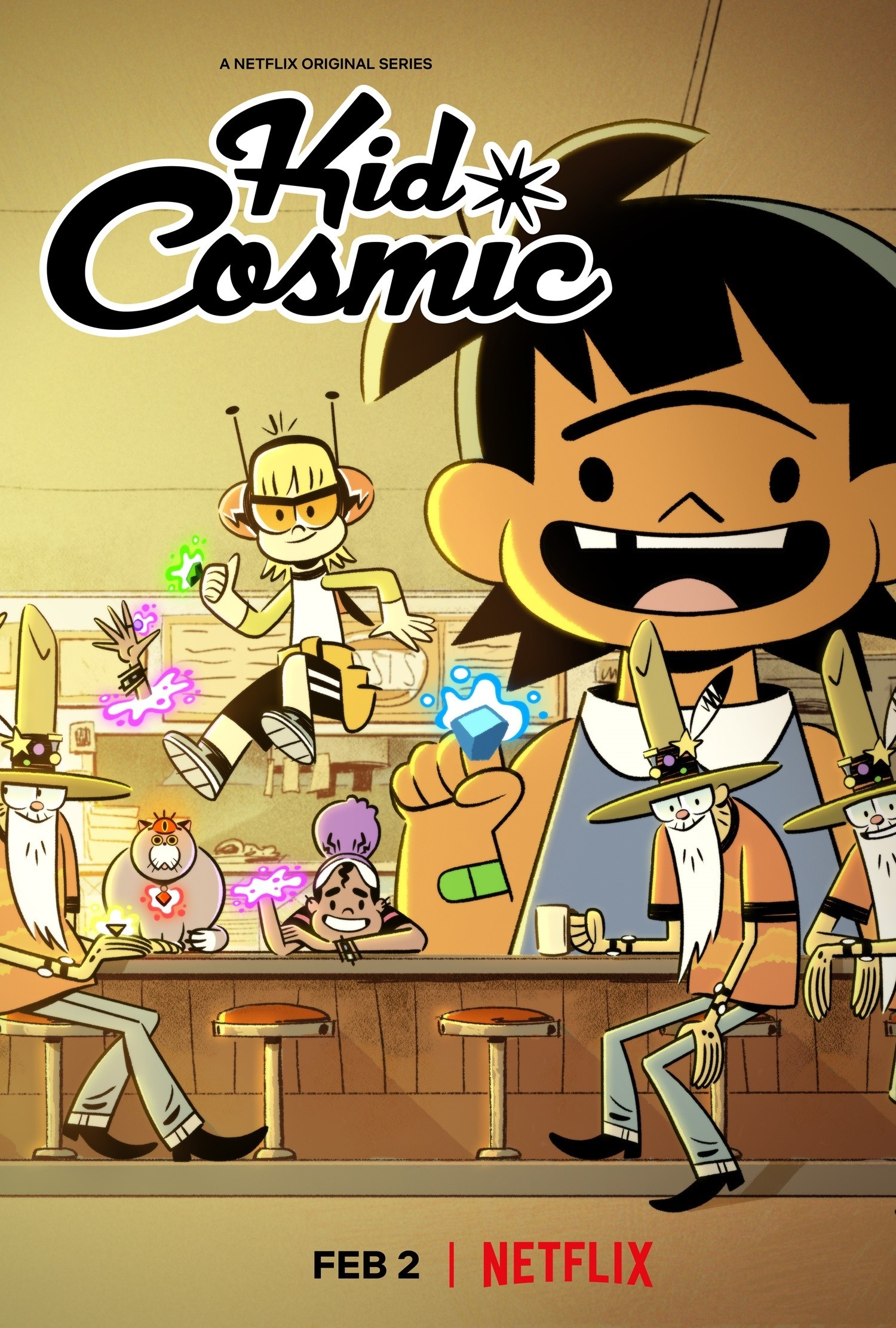