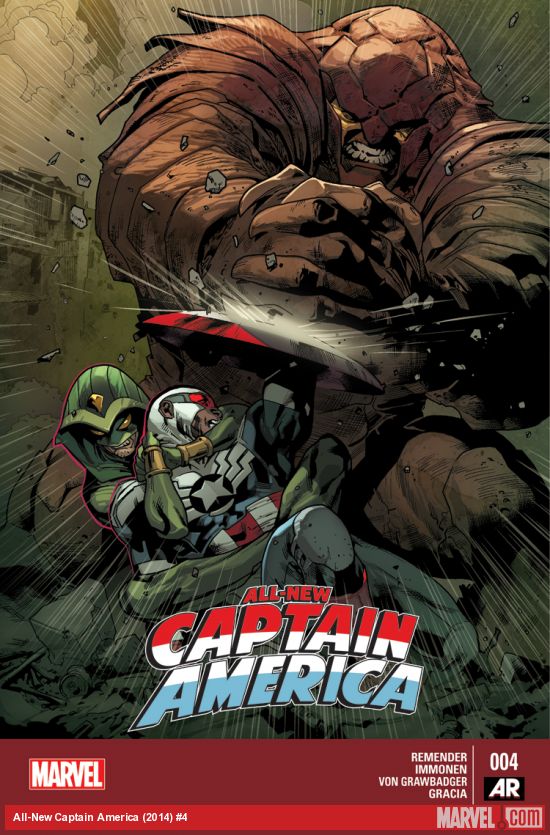 In every issue of All-New Captain America so far, I’ve gotten to a point where I start to think that there’s no way that I can walk away with some sense of closure after just 22 pages. There’s just too much to cover. Then three pages later I’m in awe of how things always end up tied up in a perfect bow. I’m left with a seemingly perfect balance of satisfaction and anticipation of what’s to come next.

This ability to leave in just enough information and detail was on full display in issue #4, where we see Captain America fighting to end an assault on the world’s entire population by the hands of a newly formed Hydra.

Issue #4 starts off with a flashback of Sam’s life as Falcon, one of Steve Rogers most trusted companions throughout his career. We’re show just how intense his passion to save the lives of innocent people truly is, even putting his own on the line while not thinking twice about his severe injuries. We’re then given some insight into his motivation and find out that Sam feels at a loss for not having a family by now. One of the other enjoyable things about the writing of this series is the use of these short flashbacks into Sam’s past that are extremely telling of his character.

In present day, Sam follows a lead to India where he finds out that Hydra, led by Baron Zemo, is planning a simultaneous assault on the world from multiple locations. After going through a self-assessed therapy session after being visibly shaken by the living conditions of the people far below the poverty line, he’s confronted by Antonio Rodriguez, a.k.a. Armadillo. Cap eventually wins over Rodriguez and gets a tip on what’s to come next in the plan.

Cap quickly heads to Florida to confront Baron Zemo, the same man who brutally murdered Nomad, Steve Rogers son. During their battle, Sam lets his rage get the better of him, which helps at first because he kicks Zemo’s ass ten ways to Sunday. But it eventually works against him and distracts him from his true objective and he puts himself, and the world in danger. The issue ends with him in quite a compromising position that I can’t wait to see him work his way out of.

Another thing that I’ve really come to enjoy about this series is the use of Sam’s internal monologue. We get to know him on an extremely deep level whether he’s in the middle of a fight or en route to his next. Also, we get another Misty Knight appearance! (In the same issue where Cap wonders about his future. Does anyone else see the early signs of a ship here?)