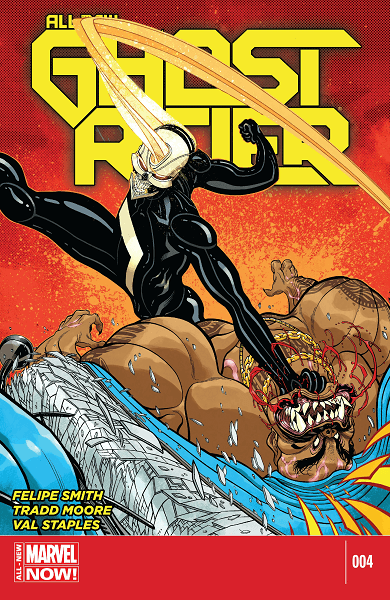 All New Ghost Rider is probably one of the zaniest mainstream books I’ve ever read. This is one of those properties that’s awesome but doesn’t always last long enough to find a proper footing with the fans. Still, Felipe Smith and Tradd Moore are certainly doing more than enough in terms of innovation and originality to make this a standout run.

This issue sees Robbie Reyes throwing down with his first super villain, roided up gang lord, Grumpy (which is the worst villain name EVER) who comes across like a mix between a Hulk villain and Prince Goro from Mortal Kombat. Meanwhile, Mr. Hyde and his mercenary death squad are stepping out of the shadows to start what looks like a domino effect to set the city on fire. Also, there’s a strong focus on his growing bond to the demon/source of his power, Eli Morrow. The narration interchanging between Robbie and his newfound dark side is a fun way to carry the plot along. Watching the demon slowly change his outward appearance and attitude is a great way to set up future conflicts in his personal life. Meanwhile Tradd Moore’s artwork is the glue that truly makes all of this pop. He seems to have a real talent for making the moments of character development look just as exciting and kinetic as the scenes that ooze mayhem and gangland violence. If Willy Wonka’s boat tunnel had uzis and fiery muscle cars instead of tye dye acid visions, it would probably look a lot like All New Ghost Rider.

Bottom Line: Another strong installment in a very brave reboot of the Ghost Rider mythos. 8 out of 10.