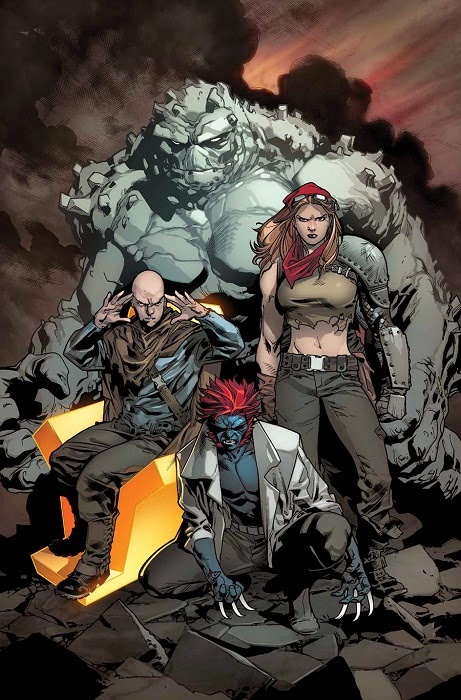 I’ve enjoyed Brian Bendis’ work on All New X-Men thus far. 27 issues later, he’s still bringing life to a franchise that’s needed a new voice worse than Jason Derulo. Bringing the Original Five from the past into the present has brought a unique sort of levity to the X-Universe. Having said that, I was a little skeptical about this latest story arc. I wasn’t a big fan of Battle of the Atom (it was awesome right up until you figured out it had no point) and raising elements of that event from the dead left me with a bad taste in my mouth. Even with that in mind, I ended up enjoying what happened here.

We pick up where we left off last issue with the Future Brotherhood (Can we call them the All-New Brotherhood or nah?) closing in on the All New X-Men’s base for an assault. I’m assuming they’re still tweaked about getting their asses kicked the last time. Evil Future Jean Grey is proving to be a treat. We haven’t seen her this awesome since….well, since the last time she was evil. The ensuing violence plays out in an absolutely delicious manner. X-Men from the past having Evil X-Men from the future for archenemies (if that’s where this is going) makes for a cool sort of symmetry. We also get an equal dose of backstory, delving into the motivations for a couple of Brotherhood members. This is a more than welcome addition considering the fact that we didn’t get a lot of character development out of them during the Battle of the Atom. In fact, this really has the potential to be the event we really wanted BOTA to be in the first place. Bendis gets major points here because ANYONE who manages storylines from two different timelines with as much balance and quality pacing as he does here deserved a medal. Stuart Immonen had his game face on for the artwork in this book. His clear-intentioned facial expressions create an almost cinematic feel to the powerful moments in character development throughout the story. And there’s great panel where we get to see the debut of Evil Son of Xavier’s (they have to start putting more memorable emphasis on these people’s names, man) mutant powers.

Bottom Line: Bendis does a great job atoning for the sins of a past X-event and, in the process, possibly gives the Original Five and interesting antagonist to call their own. 9 out of 10.