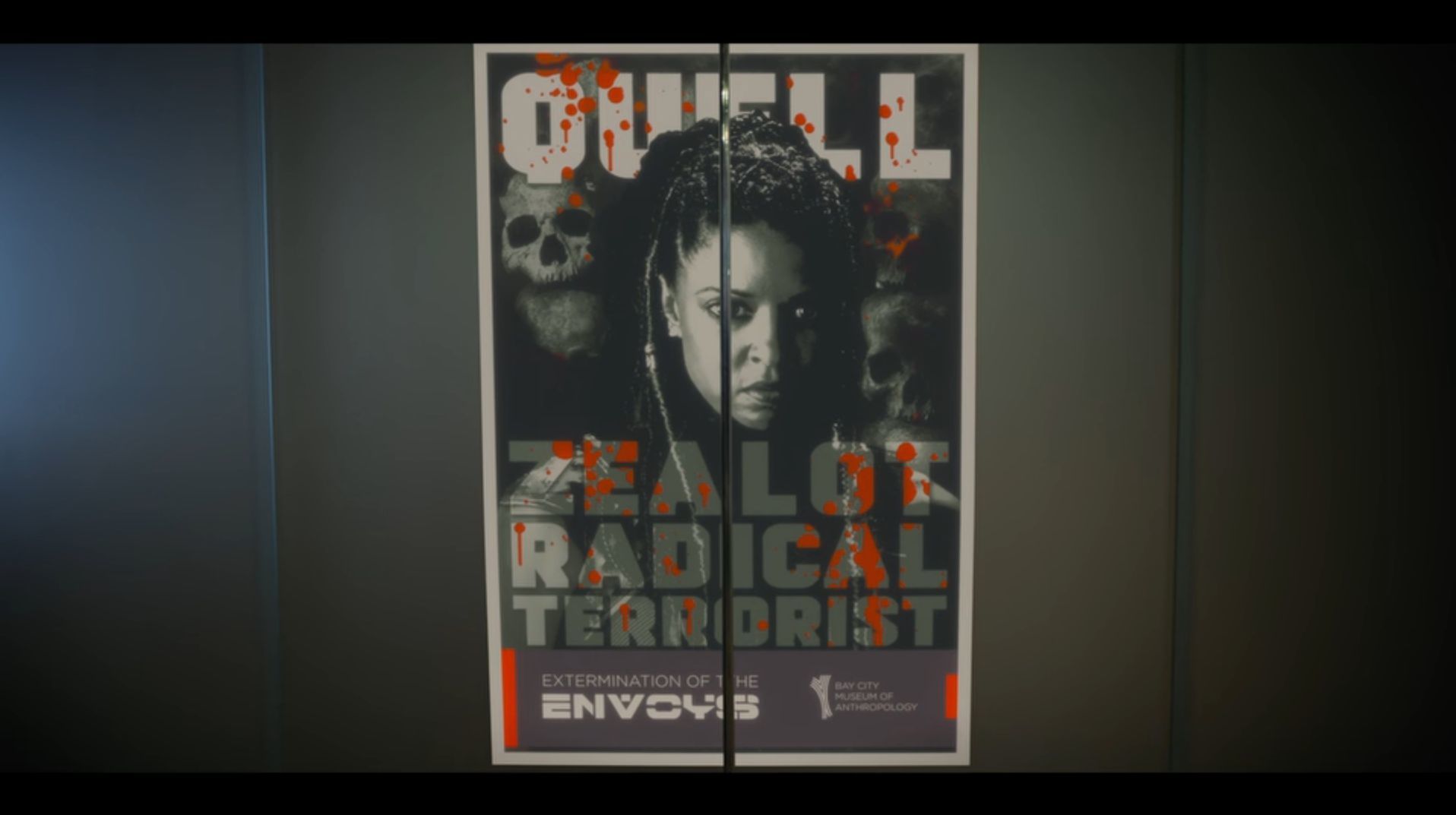 Altered Carbon continues its breakneck pace in episode two, layering more characters, plots and intrigue onto Kovacs’ search for Laurens Bancroft’s attempted killer. But even as I tried to keep up with the hurtling narrative, I found myself distracted.

There are a lot of breasts in this show. A lot.

I was ready to write about the constant objectification of women in this show, and in media generally- the near ubiquitous way that television communicates the grit of its worlds by setting scene after scene in strip clubs, and how the cameras always linger overlong on bare breasts even when the club is ostensibly just window dressing.

Then came the dick.

There’s a fair amount of men’s asses in Altered Carbon, but I have to admit that I was completely unprepared to see Laurens Bancroft’s penis flopping around. Showing actor’s primary sex organs is one of the last taboos that’s left in broadcast television. Granted, Netflix isn’t broadcast, but it still isn’t premium cable such as HBO or Starz. The platform inhabits a middle ground, where its low cost and existence outside of cable bundling makes it available to far more people, but the requirement for payment at all keeps its audience smaller than traditional broadcast television. Bancroft’s dick on Altered Carbon may not be as groundbreaking as saying “shit” on CBS (a moment which feels quaint by today’s standards), but it still feels like something noteworthy happened there.

That “something” doesn’t actually change the other dynamics concerning nudity in this episode though. Bancroft’s display is about power, the power to be completely indifferent to the opinions and sensibilities of the people around you. Kovacs himself uses this dynamic when he meets Oumou Prescott. Those scenes are in conversation with eacone-ups- Bancroft one ups Kovacs with his semi-erect penis while Poe protected Kovacs modesty. That power dynamic is subverted when it comes to the women characters.

Nudity is going to continue to permeate streaming television services, and it’s only a matter of time before it crosses over into mainstream television. Perhaps it’s worth asking the question then: what are television producers hoping to accomplish here? Every scene, casting decision, wardrobe choice and camera angle is a choice made by the people making the show. Every naked body shows up on screen because it was deliberately placed there. What are the reasons behind those choices?

The obvious one is that sex sells. Show an areola or even some cleavage and a television show is guaranteed to hold the attention of a wide swath of the television viewing audience for at least a few more seconds. It’s crass but effective, and leads to the kind of gratuitous ogling of bodies, usually women’s bodies, that we’ve become accustomed to.

But what of the connection between violence and nudity? “Fallen Angels” opened with a body literally falling from the sky, crashing into a lake near a father and his son fishing. The boy checks out the body, bringing it closer to the boat so that he can examine it. The woman’s gauzy, flowing clothes become translucent in the water, and her breasts are exposed as the son debates reporting the body to the police with his father. There is an argument to be made that nudity in death is different than nudity in a strip club, and while I agree, I don’t think television is making that distinction.

I’m reminded of a scene from Bad Boys II, where Martin Lawrence and Will Smith encounter a cadaver with large breasts, argue about Smith ogling them, and then stretch the awful joke further by making Lawrence hide next to the woman with her breasts bouncing in full view. It’s a gross, shameless scene, but it is instructive in our conversation about the actual purpose of nudity in television. Even when dealing with dead bodies, the point is titillation and shock value. Bad Boys II didn’t include that scene to accurately portray the realism of a morgue. The movie was more interested in showing big boobs, and making jokes about big boobs.

There are potentially interesting things to consider about nudity and the human body in the present of Altered Carbon’s world. How might our relationship to nudity change in a world where bodies are not only augmented, but apparently grown from scratch and kept on ice? Where individuals resleeve from planet to planet and emerge naked as if stepping out of an intergalactic womb? There was even potential for some sort of class based commentary, where Meths view nudity differently than the rest of us. At first, I thought that maybe Meths simply don’t wear bras. It’s been two episodes and Miriam Bancroft hasn’t felt compelled to wear one yet.

Yet like Bad Boys and countless other media, Altered Carbon is not doing anything with its nudity that we haven’t seen a million times before. As her sex scene with Kovacs demonstrates though, Mrs. Bancroft’s nudity was used to signal her attraction to Kovacs. Elsewhere, the viewer is treated to the same old parade of sex workers and cadavers, with breasts (and the occasional dick) flashing across the screen as nothing more than eye candy and shock moments. There is no distinction between a living person and a victim of violence, so long as we can feast our eyes on them.

That’s a shame because it doesn’t grapple at all with the nexus between sex and violence (and the obviously negative consequences of that connection, particularly for women), but also because treating bodies as nothing more than sexual objects to be consumed helps perpetuate narratives and stereotypes about shame, value and how we view human bodies. As usual, only the “bad” girls are naked, the ones who end up as double-crossers, getting hurt, dead, or stuck in the perpetual agony of their murder such as Lizzie Elliot. It’s depressing to think that we’ll still be living with these tropes in another few hundred years.