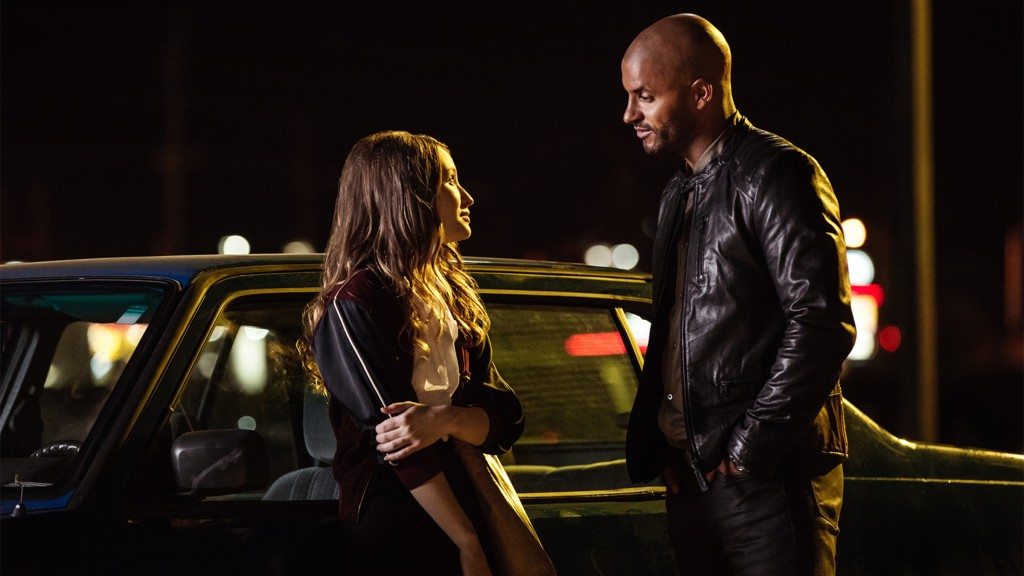 Pretty much every episode of American Gods so far has focused on Shadow Moon. Which is a bit of a step away from the books which casts the protagonist as a stoic who is mostly there so we can meet all of the gods he comes across. Episode four, entitled “Git Gone,” steps even further into this new territory by adding depth to a character that will play a much larger role than expected in Laura Moon.

[It also committed the grave sin of giving Dane Cook a job. But we’ll get into that later.]

As a devoted fan of How I Met Your Mother – team Mosby fo’ life! – I couldn’t help but be reminded of the classic episode entitled “How Your mother Met Me” while watching the latest episode of American Gods. We’ve already gotten to know plenty about Shadow in the present and have had loose references to his origin story. But this episode focused heavily on Laura’s story before she met Shadow and caught us up all the way until her present moment sitting on his motel room bed as a zombie.

“Git Gone” opens by showing Laura working as a dealer in a casino with an ancient Egyptian theme. You can tell she doesn’t really enjoy her job as much as puts up with it before she’s pushed even further into discontent when they upgrade her shuffling duties to a machine. Her life’s noticeably lacking in the happiness department. She lives alone with a cat and spends her evenings reading and contemplating suicide by way of an enclosed hot tub and a can of bug spray. [Some people think she was just trying to get high, but there are much easier ways, aren’t there?]

One day, a charming handsome devil in a leather coat sits down at her table. It’s Shadow. He’s there to hustle the casino with his sleight of hand skills and good conversation, but Laura’s already hip. She spots his play and lets him know that real life isn’t like the movies. If he gets caught, which he eventually will, he’ll end up doing fed time. Shadow takes her advice and walks away with his ego noticeably bruised. So, what does he do? Waits for her to get off in the parking lot like a supreme creeper. But hey, Hollywood has always had really messed up love origin stories so why would this be any different?

Laura and Shadow hit it off and go back to her place for some hot and heavy salutations. The next morning, Laura wakes up thinking that her one-time-thing’s skipped town only to find him in the kitchen. Are things getting serious? Looks like it as Shadow spends the next few hours showing her card tricks and trying to get her on board to scam the casino she works at. [Note: Don’t try to pull a scam at your place of work. It’s too high of a risk.]

Time moves forward and we see Shadow, Laura, Audrey and Robbie enjoying some good ol’ American barbecue, the Moon’s wedding and find out that Laura’s a bit of a pessimistic cynic. Things continue moving forward and Laura starts to realize that this newfound love hasn’t cured the hole she feels inside as her depression starts to come back. Searching for a new cure, she decides to try and rip off the casino with Shadow’s help with the “perfect plan.” He’s noticeably bothered and does exactly what people tend to when they find out their loved ones are depressed: Asks what he did wrong and how he can fix it. Looks like robbing the casino is the only option.

Shadow: I would be happy living in a cardboard box under a freeway as long as I was with you.

Laura: See, that represents failure to me…

As expected… things go completely to shit. Shadow ends up in prison and takes all the heat because he doesn’t want Laura to do time too. So she promises to hold him down for the 3 to 6 years he’ll be inside. Which sucks to watch because we know she ends up having an affair with Robbie.

After an undetermined number of months, Laura’s loneliness starts to eat away at her. She has a weak moment and makes a move on Robbie when he comes over to help around the house. Dane Cook’s casting makes sense in hindsight because we’re never actually meant to like him. He’s meant to be the slimy dude who’s got the hots for his “best friend’s” wife, comes crawling back after making what he KNOWS was a mistake, and catches feelings despite regular “this isn’t what you think it is” conversations.

Do you remember that touching scene in the first episode where Shadow is on the phone with Laura excited about coming home? Yeah. Robbie/Dane Cook was in the background, in his underwear, laying down in Shadow’s bed. Talk about scummy. Robbie makes one last attempt at living a fantasy with Laura by saying they should leave their spouses and ride off into the sunset. Laura puts an end to that entire discussion and agrees to give him a farewell fitting of their rendezvous: Robbie singing to her while she has her head in his lap while speeding down a rural highway. Song of choice? “The Weight” by The Band. [Note: I never knew the name of either and now I know why.]

Now we’re starting to get into the current timeline. Laura pulls a Yu Yu Hakusho and looks down on the scene of the accident that took her life. It’s time for her to meet the afterlife. A.k.a. have a sit-down with Anubis, who we met in episode 3.

Instead of just accepting things as they happened, Laura basically becomes the lady that comes into your job and intentionally makes your day as bad as hers. [But it works for her!] While Anubis tries to do his thing with the feather and her heart, Laura points out how pointless the whole process is but then admits she doesn’t want to die after all. Which, I must say, is a tad bit rude given that he thought enough to give her the hot tub-bug spray combo she seemed to be so infatuated by in the living world. That’s what I’d call some real closure.

Anubis: … There will be darkness.

The show then takes a quick, ominous turn from How I Met Your Mother to The Walking Dead as Laura’s ripped out of the afterlife and climbs out of her grave. Off in the distance, she sees a bright light that draws her to Shadow. This is when we find out she is the one who saved Shadow from his near-lynching because zombies.. have.. super-strength…?? I don’t know… let’s just go with it. Watching her kick somebody in the crotch so hard they blow up is well worth suspending disbelief.

In the middle of the mayhem, Laura’s arm gets ripped off. So now we’ve got a blood-drenched girl walking down a suburban street with her own arm in hand. How did someone NOT see her and call the police? Not an old lady? Someone working the night shift? Not even that petty ass paper boy who hit shadow in the back with a newspaper???

Laura goes back home and takes a shower to get clean – or, at least as clean as a bloody. recently unearthed zombie can get. She tries to sew her arm back on before she gets a really bad case of the bubble guts.

Wait, what’s this? Laura didn’t go home at all. She actually went to Audrey’s house because she had a sewing kit she could use. You know what kind of nerve she has to have to think she can get away with this?? Well… on second thought… this is the same woman who told Anubis “F*ck you.”

The next few minutes of the show gives us pure gold. It’s the interaction we needed but never knew we did as Audrey comes back home to find an armless zombie waiting for her. Audrey responds just about the way you’d act. Locking herself in the bathroom and screaming in terror at the “zombie whore” forcing open the door. Then looking on in confused horror as Laura shoots embalming fluid out of every hole she’s got in the toilet. After the initial shock wears off, Audrey and Laura have a very honest conversation.

[Note: We finally find out where Robbie’s penis ended up.]

Audrey’s suddenly one of my favorite characters in this entire show that’s full of them. The following conversation between the two shows, oddly enough, the depths of how deep friendships can go even when you’re completely f*cked over by each other. Sure, Laura was sleeping with her husband and subsequently got him killed. But Audrey’s still down to sew her arm back on and drove her to go find Shadow. While the two head down the road, they fall right back into each other’s good graces like nothing ever happened.

Please, give us more Audrey! She didn’t waste a single second saying all of the things to Laura she probably wished she could ever since she died.

Suddenly, the car slams to a screeching halt as a man and a dog appear in the middle of the road. The dog then transforms into a man named Mr. Jacquel, previously known as Anubis. The two then take Laura to their funeral home to patch her up and let her continue on her journey while letting her know her body will only last for so long while her heart tries to keep her moving forward.

One of the most intriguing parts of American Gods, both the book and series, is seeing how the gods of old have managed to make their skills and talents fit into a contemporary world. The god of the dead running a funeral home? It’s somehow both a genius concept and a no-brainer at the same time.

The episode finally comes to a close with a newly re-attached Laura waiting for Shadow in his motel room with air freshener and a fly trap to catch the bugs who can’t seem to get enough of her both in life and especially in death.

Check out the preview for next week’s episode, entitled “Lemon Scented You” here. Read the premise below:

Trying to work things out with his dead and unfaithful wife, Shadow’s emotional reunion is interrupted when he and Mr. Wednesday are kidnapped by the New Gods.