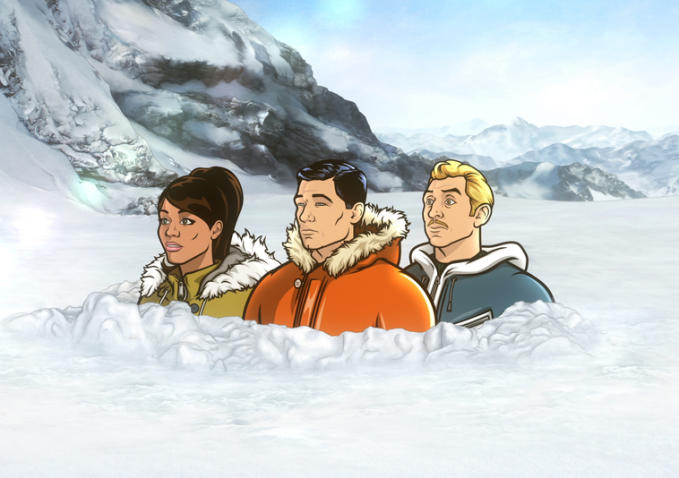 Coming off of a great episode last week, Archer dipped back down a little bit this week as Sterling, Lana and Ray all head up to the Swiss Alps for some mountain climbing, some Peppermint Patties (Sterling’s new drink) and some assassination. The three have been tasked by the CIA to take out an assassin who is going on this expedition, but of course, Sterling blew off the dossier, so they don’t know who they are supposed to kill. Sterling thinks that the target is from a country that was an AXIS power in World War II, but considering that three climbers are from Germany, Japan and Italy, that doesn’t help much. There are some big funny jokes throughout this episode, but the laugh a minute counter is definitely down from the previous week. Archer (and shows like it) often have lulls where the jokes become more witty than funny and most of this episode falls into that category. The mystery of who the assassin was had some potential, but the answer seems pretty obvious from the beginning and the writing didn’t really give us much misdirection outside of Sterling making stuff up or not knowing what he was talking about. Lana and Ray both flirting with the mountain climbing expert was funny, coupled with Sterling’s expected jealousy. Lana doesn’t fully acknowledge this until the expert “tries to save” a fallen climber leading to Lana saying, “So…would you be jealous if I banged him?”

The B-Team of Krieger, Cyril, Pam and Cheryl were all celebrating Cheryl’s birthday and their stuff was pretty on par with main content as far as humor. Some hit and misses, as Cyril seems to be relegated to setting jokes up for other people now by being more prudish than usual. Their adventure takes them from the hidden hot tub spot at the office to Malory’s home, in hopes of finding her for Lana so they can get intel on the mission in progress. Them still being drunk and hung over from the night before was funny, especially the admission that Pam and Cheryl both had keys to the apartment as part of Ron and Malory’s open marriage. Malory (who inexplicably is babysitting A.J. again) isn’t there because she had the apartment bug bombed. Yeah, figure how that one ends up.

One of the things that have been missing so far from this season is that Sterling hasn’t interacted with the office drones at all. While the show is squarely comfortable with Lana and Sterling as leads, some of the funniest and quirkiest interactions have been Sterling with Pam or Cheryl and that’s been missing from these first three episodes. We’ve still got a full season ahead, so I imagine we’ll see more of that soon.