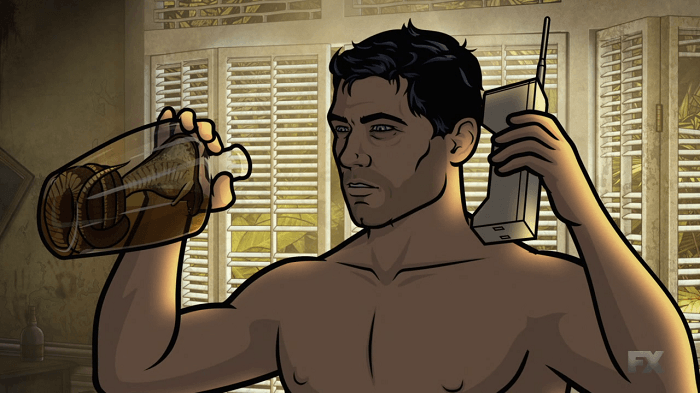 Welcome back, welcome back, welcome back. Archer is back for season number six and the new boss is the same as the old boss. Sorta. After the break from normalcy (or whatever passes for it on Archer) last season where our favorite dysfunctional spy agency tried their hand at being a drug cartel, they are back in the espionage business. But not as the agency we can no longer mention because they are a horrible terrorist group that executes innocent people, but instead they now work for the CIA. There’s a joke there that even I refuse to make. But if the beginning of this season feels familiar, that’s because it is. Archer, whose milkshake brought all the babies to the yard, is still having a hard time dealing with Lana using his sperm to impregnate herself. Can we uh, sideboard that, off just a minute…

…Everybody likes Lana, right? She’s usually the coolest head in a room full of idiots, right? And I do like that she’s a mom now. It was a cool and necessary way to move her character along a bit after 4-5 seasons. But even for this show, this is all the way fucked up though, right? Like…I’m not saying this as a dude, I’m saying this as someone that likes the Lana character. Like, this is some shit that Cheryl/Carol would’ve done…but only in season one. Not sure I’ll be getting past that anytime soon. But anyways…

The bulk of the episode involves Sterling in the jungle encountering a Japanese soldier who still thinks World War II is still going on. I mean…come on bruh, really? While there are some funny exchanges and bits on the island as Sterling convinces him that the war is over and they try to stay alive during an insurgency, they could’ve done a lot better with their first stop back on the old trail. The whole situation is basically a vehicle for the soldier (Ken) expressing his regret for missing out on his child’s life while Archer is running from his responsibility (if we can call it that) as a father. I mean, we get it, but the heavy hand was really heavy. Like Mjolnir.

The funniest parts of the episode were actually the crew back home and the introduction of the new office. Shit was just cruel. Malory gave Cheryl and Pam a ton of money to remodel their old office and they spent the money, lets just say, liberally for not much to change. At all. They even duplicated the blood stain from Brett on the floor. Malory might need for real therapy after that.

Archer’s back with an ok, not much happening episode to open the sixth season, but Archer has a habit of starting slow and gaining steam in the following episodes. The reset button got hit, they’re back on they’re spy shit and I think a few more episodes in, this will be back to being one of the best comedies on TV again. But this feels like the preseason right now.