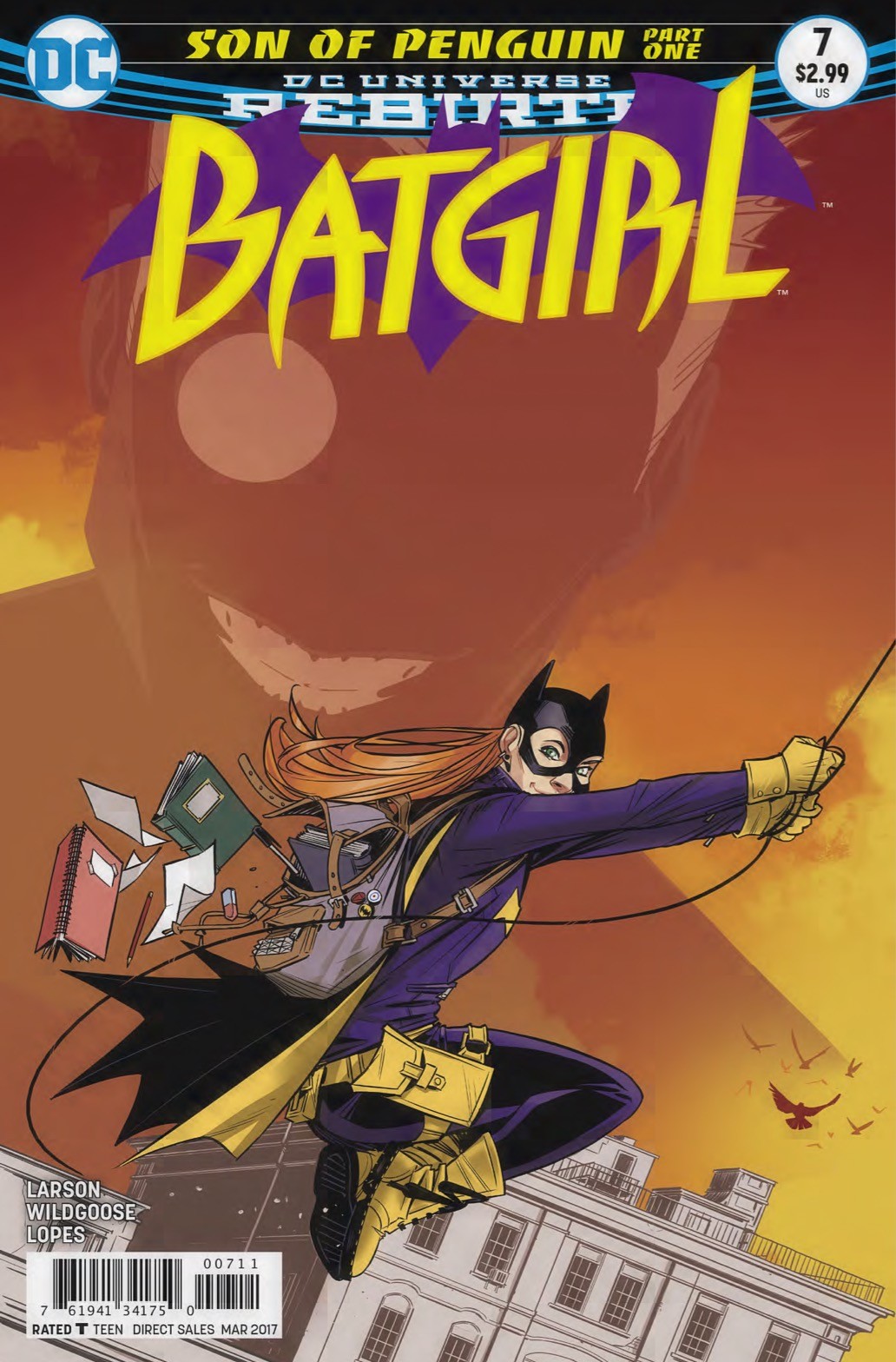 It’s a new day for Batgirl, recently returned to Burnside after Hope Larson led Babs on a traveler’s adventure through southeast Asia. In this second arc the series is switching gears — after a buffer from issue #6 that helped serve as a transition point — by delving into the reverse culture shock any traveler feels after returning home after a long time gone. The theme announces itself early as gentrification-focused social justice and capitalism versus the exploitation of the poor and vulnerable. Admittedly, this seems a rather weighty and sensitive issue for a white hero take lead, so if a warning alert rang in your head you are not alone. Still, readers can hope for a thoughtful approach that nods to an understanding intersectionality that leverages the diverse cast surrounding Babs’ character and tackles the theme with as much sensitivity as it does fun. 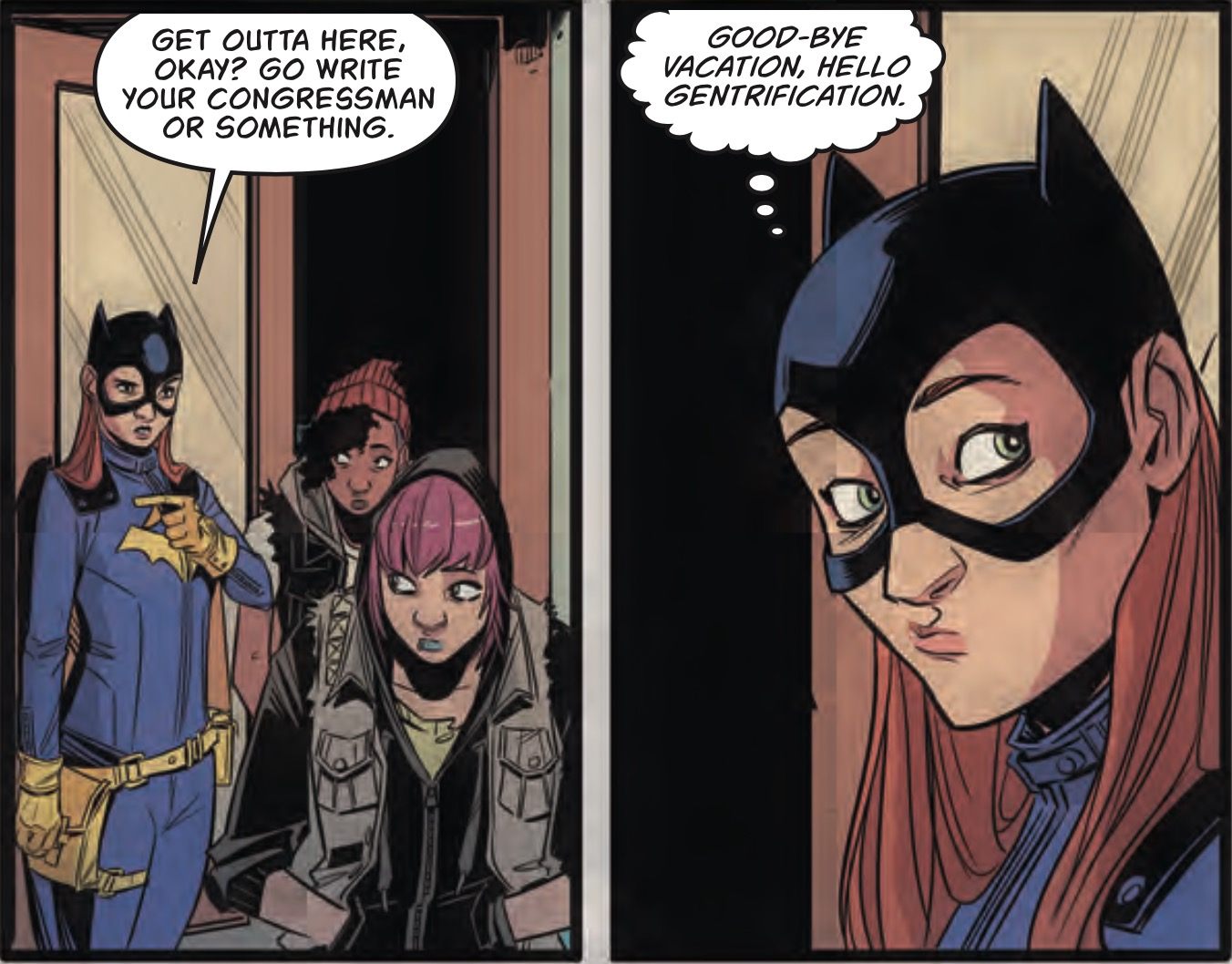 Also new to the series is Christian Wildgoose, replacing Rafael Albuquerque with a style not radically dissimilar but slightly more realistic and detailed, which actually serves the plot direction well, even if unintentionally. The return to Burnside has a “back to life, back to reality” feel that’s subtly supported with the change in artistry. So far so good, as Batgirl #7 is low in action but still fun to read as a reintroduction to the neighborhood, a landscape obviously much narrower than her travels through Asia, places we will likely visit more than once if not repeatedly. 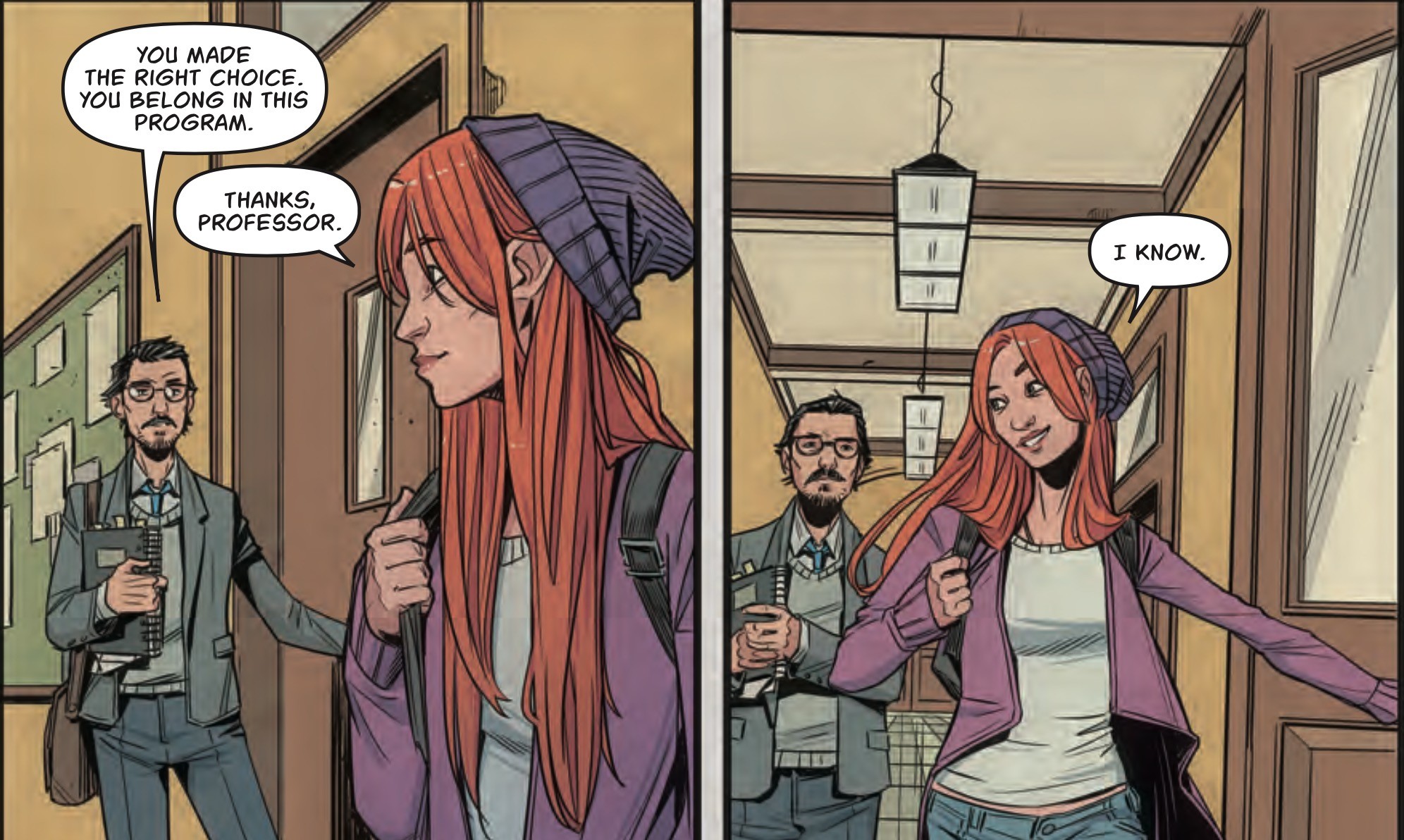 The conflict revolves around Babs’ impression of her city after seeing it with fresh eyes, having traveled. People suck, snobs abound, and Babs — a social justice warrior, literally and figuratively — seems to notice the city’s lack of empathy for the first time. Of course, it wouldn’t make for a good comic without a villain representing the callousness the rich exhibit towards the poor, and that potential villain comes through a familiar name: Cobblepot. Penguin’s son is rich but seemingly on the same page as Babs when it comes to making Burnside a better place. His kindness is a curve ball that gives Babs pause, and her inherent skepticism leads her to get to know him as Babs, while keeping watch of him as Batgirl. The question, obviously, is whether he can be trusted, and, potentially, whether Batgirl (and readers, by proxy) are wrong for presuming guilt in someone because of their last name.

Overall, Batgirl #7 sets up for an interesting arc that allows readers to see Burnside from a slightly different lens as our heroine returns after having grown a wider perspective as a person. If the series really hopes to address a sensitive theme, the rest of the series’ success will lay in its supporting cast and how much Batgirl appreciates the perspective of others as she fights for the less fortunate around her. If that’s the goal, Batgirl has set itself up with a diverse range of characters to utilize. If that’s not the goal, expect a thinner plot of Batgirl facing a representative of a conspicuously greedy capitalist, or an elongation of the question whether to trust Penguin’s estranged son. I’d rather the moral conflict between the two addressing opposing views on how to improve their city, but either way, we should find out soon.