Black Nerd Problems members Aisha and Frantz caught up with Janet Varney and Dante Bosco at New York Comic Con for a spirited interview about their podcast and the great(er) Avatar: The Last Airbender Universe.

BNP: What’s it been like, being connected to these characters for so many years?

Janet Varney: I mean, we love it. I mean, Dante says it best. So, I’ll just steal his words and go ahead and just pretend like I came up with it. We have never taken for granted how lucky we are to be a part of something with this kind of longevity that feels timeless, that inspires people.

A lot of people that we know who are massively, massively talented, have not had this kind of experience. And so it starts to feel like just luck, you know, like we’re just really, really lucky. And so I want to say that kind of comes through whenever we talk about stuff. And what we’re doing, the podcast [Braving The Elements], like there’s no sense of taking anything for granted, and we still have wonder and awe about what Mike [DiMartino] and Bryan [Konietzko] have created and continue to create?

Dante Basco: We’ve both known the industry a long time, so it’s great.

Everyone that comes to Hollywood that wants to do something, wants to do some kind of project that people really care about. Like, the characters that capture people’s imaginations and capture their heart and they become real fans of. We’ve been very fortunate to kind of be in the Avatar-verse.

So yeah, we feel, we feel very lucky and doubly lucky — it’s also a very unique experience. For this whole thing that happened, during the pandemic, and then to come on Netflix and then become the number one show on Netflix? It almost can never happen except in today’s time. Who gets to go back to when they had success fifteen years ago during a show, and then go back again and have success? Like, ‘It’s like the number one show again right now? Hold on a second.’ That’s what we did fifteen years ago. And then now, to be able to really sit down in a new platform– podcasting, the new platform! Like the new platform, which is really the old platform.

So in this new world of podcasting to go and do a really detailed, deep dive into something that you did fifteen years ago, ten years ago. And with love, but also get to like really take time to really experience it in a new space. And in these times, yeah. It’s really phenomenal.

Janet Varney: ‘Cause like having, just having that one degree of it’s only my voice. Josh Molina is a good friend of mine and he did West Wing Weekly and that was one of the early kind of recap podcasts. And I was like, ‘how can you stand to watch yourself?’, I don’t think I can do it.

I remember the first one they premiered for Nickelodeon, a wonderful premiere for Korra. I know they did an amazing one for Avatar. We saw complete episodes. My experience, of seeing two back-to-back episodes and just being completely immersed. I was like, ‘oh, how am I going to feel about seeing it?’ Then I just forgot it was me. That’s not a testament to me. That’s a testament to the work.

There’s just too much going on. And it’s too beautiful to start being like, “I sound dumb!” And I spoke to someone afterward. It was like, ‘what’d you think?’ And I opened my mouth and stuff like [to say], “That was amazing!”.

I genuinely was like, ‘oh, that’s Korra’s voice.’, I felt weird. I felt like, ‘I wish my voice sounded different because that belongs to someone else now.’

Janet Varney [Korra], on watching Legend of Korra for the first time

BNP: That took me on a whole trip. I was actually listening to the podcast. I know it’s newer, it came out around June?

Janet Varney: I know, I can’t believe it’s only been a couple of months.

BNP: The chemistry and charisma work really well on your podcast, but there’s something that melted my heart.

What was it like to reunite with the cast? In this way, on this medium?

Janet Varney: I mean, I’m loving it, because when we get to Korra, he’s [Dante] going to have to, you know, he’ll be watching me be like, “Omigod! I haven’t seen you in so long!”. But I get to be the moderator in some of these guest episodes where I just see people and they’re daunting, like Kevin Michael Richardson.

Dante Basco: KMR [Kevin Michael Richardson] is like,” I don’t even know what we’re talking about dude, what’s going on with you? How’s life?” I’m talking about half the time. “I just want to catch a thousand shows you did that year.” I don’t know.

But the other thing is because it’s been COVID and A: you miss the people you haven’t seen in a while anyway. But B: we haven’t seen anybody in a while. So when you like, see each other on the zoom, we’re like, “Yoooo!”. Of course, Jack DeSena [Sokka] is always very– you just miss your friends, and then you kind of get a talk about this great thing you did all those years back. Like, “Remember when we saved the world? Oh yeah, I remember when we saved the world.”

BNP: Tell us more about the Braving The Elements podcast.

We gotta talk about the sound. We really wanted to dig in and we both work in production as well. So we’re really interested in all the nuts and bolts. So the enthusiasm is real. Luckily we’re not faking our way through anything.

Dante Basco: I’m at work in production at the same time. I’m trying too.

Just to be maybe as smart as some of the fans that I meet at the cons, like later on. And be like, ‘yeah, I do know some stuff, what you wanna talk about?’

BNP: For Dante, from Rufio to Zuko, what’s it like to play the anti-hero for so many years?

Janet Varney: I think the question she’s asking is, ‘why are you so good at being bad?’

Dante Basco: I don’t know. We talked about getting characters that people care about, they have longevity. To do Rufio at such a young age.

I mean, I was fifteen, and like, to a lot of people I’m still Rufio. Like I’ve been Rufio my whole life.

Janet Varney: He sprayed a little salt and pepper into his hair. He’s trying to look older.

A: I feel, very fortunate. B: I feel like people always ask me, ‘are you more like that? Are you more like, Zuko?’ Are you more like Rufio? The reality is I’m probably Jake Long: American Dragon. I’m probably Jake Long. That’s really who I am, like, hip-hop. And he was a skater. I was more of a break dancer, but we liked that. Well, the nineties hip-hop vernacular we had in American Dragon…We just did it. I mean, I don’t know how Disney approved it, but whatever, we just did it, but I’m like that character. And then these other brooding guys are like my alter ego.

Every character teaches you a lesson. Zuko taught me a lot of lessons. One being the old ‘don’t judge, a book by its cover’. Which I hope it teaches everybody else. As a character, I went to Zuko thinking, I’m just going to be the villain on a Nickelodeon show and then cut to years later, like, he’s not just the villain. To go on that redemption arc with him. It taught me a lot.

BNP: Is that where you kind of thought your career was going to go?

Dante Basco: No idea. Having this career. We don’t know what we’re doing.

I’ve been thirty-five years now, in the industry. And I start out as a break dancer, got into acting, continued to act, got into voice acting, writing poetry, then started writing books and screenplays. Then writing films, then producing films, then directing a film. Now I’m a podcaster. What the hell kind of industry is this?

Janet Varney: We both relate in that way because we’re very much like, ‘well, this opportunity came, and it was totally unlike anything else I’d ever done’. I was curious about it, so I did it. We’re just like, ‘how about this? How about this?’ Then I went over and did this [Braving The Elements], and I produced a comedy festival. You [to Dante] made a movie?

Dante Basco: Well, she produces one of the biggest comedy festivals in the country.

Janet Varney: Putting those different hats on, I think it helps us sort of stay sane.

Dante Basco: Everyone does Hollywood the way they gonna do Hollywood.

You can’t tell anybody how to do it. This is the deal: read all the biographies, every one. Get all the information, but the trick is you actually can’t do what any of them did. If you did exactly what Steve Spielberg did, you’re not going to succeed. You gotta do you. That’s the weird thing. You got to get all the information and then do you, but then really do you. That’s the hard part.

BNP: Janet, how did you navigate Legend of Korra‘s polarized fan base?

Janet Varney: Well, for the first couple of years, I didn’t even know that it was polarized because no one was going out of their way to troll me in any kind of way.

So it took me a long time to realize there was a lot of Korra hate out there. I come from a place of, ‘we love them, both’. I fully get why people who are so connected to the first series felt betrayed in some way. It’s like, ‘Hey, Aang’s dead. Anyway, welcome to this brat.’ I fully get it.

Dante Basco: It’s whatever, I don’t really think it’s hate, but just the conversation; like the clap back or whatever is because people care so much. And that’s really the love.

BNP: Do you think that will split the audience for Braving The Elements?

Janet Varney: If people stick around, I don’t want people to be like, ‘oh, I’ve loved the podcast for three years, but bye!’ You know what, I’d be like,’ come with us’.

The Braving The Elements podcast airs weekly everywhere podcasts can be, with clips on YouTube. 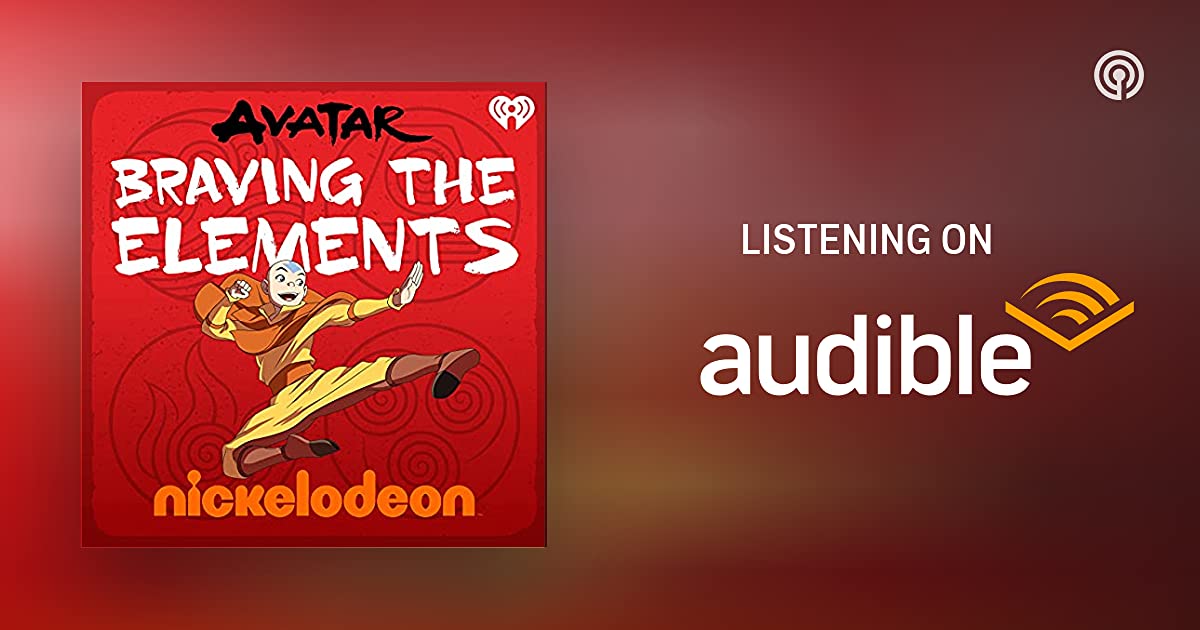