Captain Marvel is another blockbuster on our hands, fam. The Marvel Cinematic Universe has had a few mis-steps (how did we make it through Thor: The Dark World anyway?), but early indications are that Captain Marvel isn’t one of them. (You can read Variety for an early review roundup.)

With ticket pre-sales in the stratosphere (listen, this article is gonna be full of air/space/flight metaphors, so get on board with that now, flygirl), it seems likely that you and many of the folks you know will have seen this one by Monday morning. Hell, I might have seen it twice by then. This brings me to a question with many answers: Why? What about this particular combination of character, crew, and timing has brought Marvel to another hit? Captain Marvel, and Carol Danvers, are resonating right now in a serious way. Let’s talk about why.

Higher: Behind the Scenes

There can be little doubt that Marvel was under pressure to produce a women-led movie. After the success of Wonder Woman, that had (mostly white) women crying in their seats, Marvel was for the first time, behind the curve. Whatever plans they’d had to make Black Widow the female face of the MCU faded as quickly as Johannsen’s “it girl” status. They needed a woman’s face to put at the top of the marquee with Captain America and the rest or else there was a very real possibility that DC would slap Harley Quinn on everything and beat them to the top.
Enter Captain Marvel.

With Kelly Sue DeConnick’s damn-near legendary run on the comic, they had a feminist-friendly hero with all the credentials you could ask for. American military background. A huge backlog of stories, some better than others. All the best superhero powers — flight, punching things, taking hits. Not a mutant. A connection to space that would play well with any GotG-crossover. A “strong female character” who had once been “Ms.” but was now “Captain”.

The Marvel bosses pulled together a crew designed for success. They knew what they needed: a woman director and women writers. Period. Check the credits: This is the first Marvel movie directed by a woman, Anna Boden (along with her partner, Ryan Fleck). Boden and Fleck are also on the writing credits, as are 3 other women. One of them is Nicole Perlman, who co-wrote the original Guardians of the Galaxy movie and was the sole writer on the stellar Gamora mini-series. Perlman knows her way around a super hero, for sure.

They got DeConnick and her #CarolCorps on board. DeConnick has a viral fanbase while also being interview/media savvy. Having Kelly Sue was like getting an extra promotional writer on staff. With her sign-off on the plot, her fans were ready to buy tickets for anything, providing essential early buzz for a movie starring a hero that many non-comics fans had never heard of.

All of that positioned the project well from the beginning, but having all the pieces in place is only part of building a spaceship. You need a force to get somewhere.

That force is the character of Carol Danvers and how well she fits the current moment. White. Blonde. Conventionally pretty in a comic book girl (girl is intentional here) sort of way. Carol’s got an arc (mostly intentionally) designed as a mirror of the feminist movement. Originally Ms. Marvel, Carol’s been through it all on her road to finally taking the title: Captain. It is noteworthy that at the time of her famous “I’m taking the damn name” statement, Danvers had already been a full Colonel for years. If that isn’t impostor syndrome keeping you from greatness, I don’t know what is. 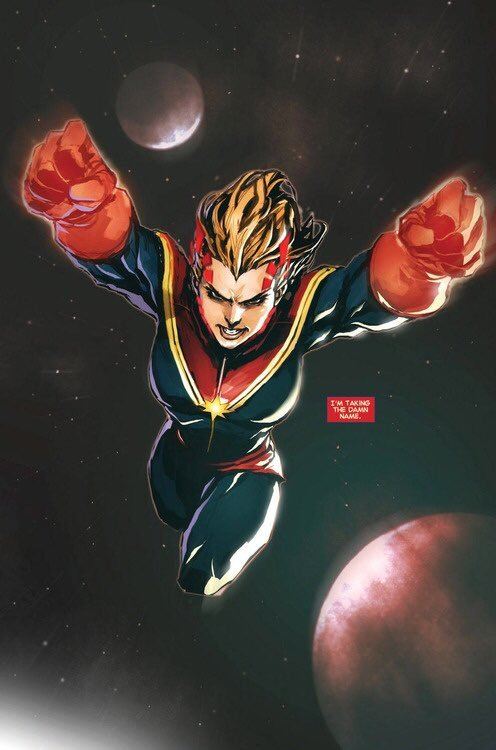 All of this: her history, her attitude about that history, and her determination to continue being the best she can be, is what resonates with her fandom. It is what Kelly Sue DeConnick embraced with her writing. DeConnick actively wrote a woman character from a woman’s perspective, centering Carol as an ambitious, talented warrior who also loved cats and kids. In the redesign by Jamie McKelvie, Danvers completely leaves the male gaze behind. The modern suit is practical while also being heroic, feminine without being femme. It is the suit of an Air Force pilot.

The look and the story — about a woman who’s unashamedly powerful working her way through life, having other women as friends, and saving the world with the same confident swagger as Thor or Iron Man — engaged readers, men and women alike. All were looking for that spark. The comics provided it. Not every issue is great, but the good ones are spectacularly good.

All of that made it easy for a community of comic book readers, mostly women, to rally around the character and become #CarolCorps. The #CarolCorps is a fandom of cosplayers and other fans, centered around the DragonCon appearances of DeConnick during the comic run. They have knitted patterns. They have Carol themed tattoos. They create fantastic cosplay. By and large they seem to really want to embody what Carol means to them, my favorite DeConnick quote:

Faster: What I’m Here For

I came to Captain Marvel through her biggest fan: Kamala Khan. In Ms. Marvel #6, Kamala has created a crowd of dopplegangers of herself so out of control, she has to call on her mentor Captain Marvel for help. 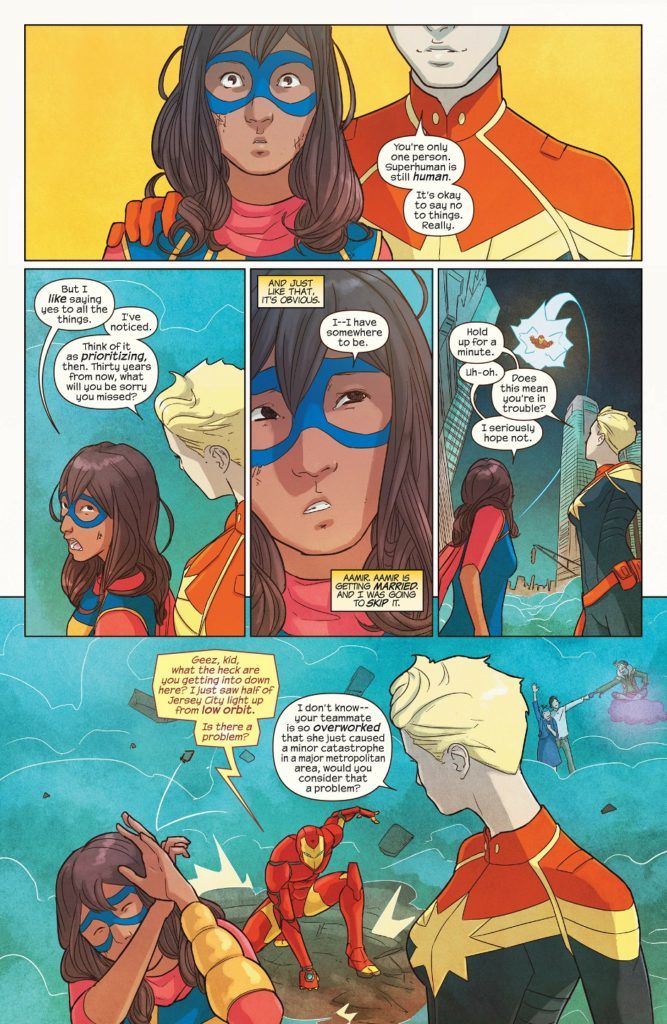 With an intro like that, I had to know more.

I found Carol Danvers to be a compelling character in so many ways. I love that she’s a grown ass adult with grown ass problems. Her mother figure is dying. Her best friend has a baby and less time to hang out. She wants to go to space but has some hesitations about leaving her boyfriend. Grown folk stuff. So often it feels like the only fully realized female characters are under the age of 18, so finding one who could be my peer is affirming in many ways.

I love that Danvers is good at what she does and she knows it. Her confidence is contagious. She takes absolutely no shit from anyone, because she knows she doesn’t have to. Not because she’s smart or because she’s pretty, but because at the end of the day, she will punch a fool directly into the sun. I can’t punch at fool into the sun, but I can dream, right?

Lastly, I love that Captain Marvel can sometimes stop being Captain Marvel and just be Carol. She cares for the people around her. She plays in the snow with the neighborhood kids. She gets embroiled in Christmas shopping sprees. And none of those things negate the fact that she is also The Boss of Space. It is so rare that women characters have fully multi-dimensional lives. Across her writers, Carol does.

Carol is perhaps the only superhero I genuinely want to be more like. Including the punching fools into the sun part.

What’s next for Captain Marvel? The movie comes out this week, and you can definitely check back with us for reviews and commentaries of the next big thing. On the comics front, there are plenty of choices for where to see Carol at her best. Here’s my list:

First: Just read Captain Marvel #1 by Deconnick and Soy. It is well loved for a reason and features all the information you need to get up to speed quickly. I’m not as much of a fan of the rest of the first arc, but #1 is a solid choice. 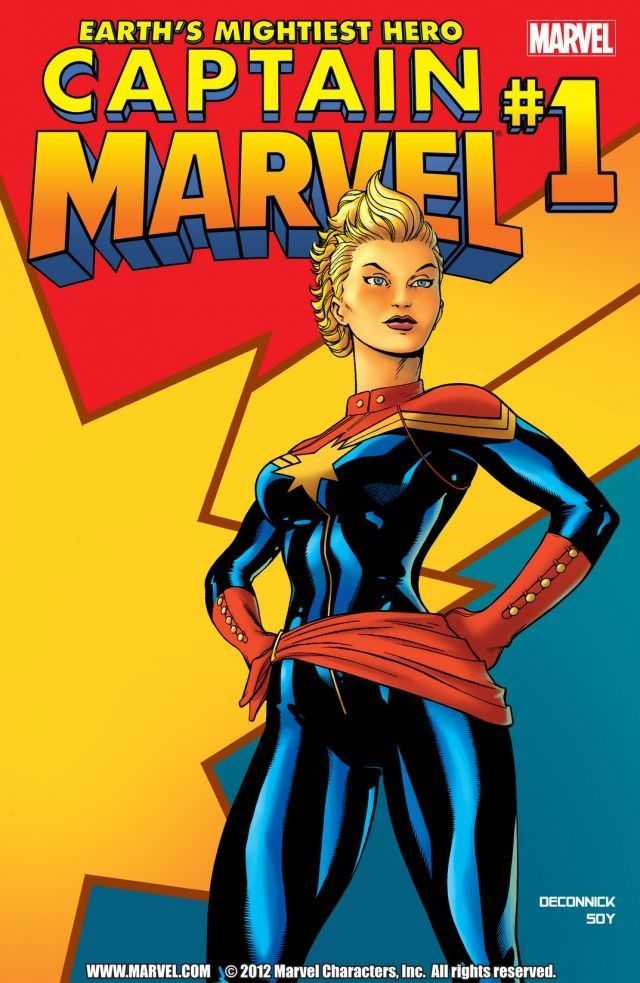 Second: Captain Marvel #7 and #8 feature Monica Rambeau, who had at that point only recently given up the title “Captain Marvel” to become Spectrum. Not only is Rambeau utterly fun to read, her rapport with Danvers previews many of the features that make future issues good: witty conversation between women peers. 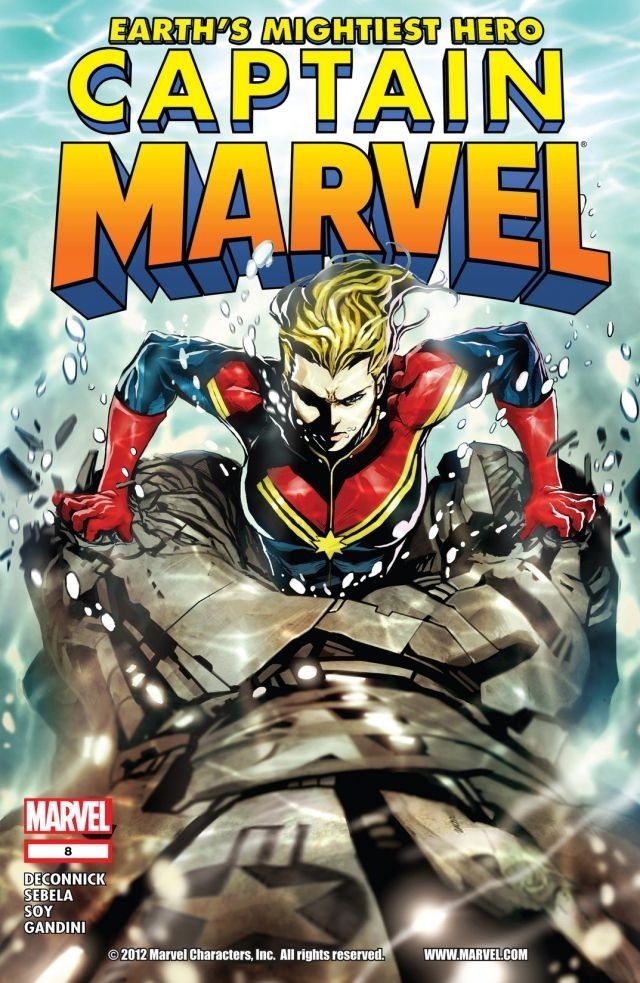 Third: Captain Marvel’s second #1-#6 feature Carol being the boss of space, wrestling with the morality of helping other people without turning into a white savior or worse. This is not just a fun arc, but a serious one, that pivots around on definitions of home, empowerment, and self-determination, both at the individual and the community level. 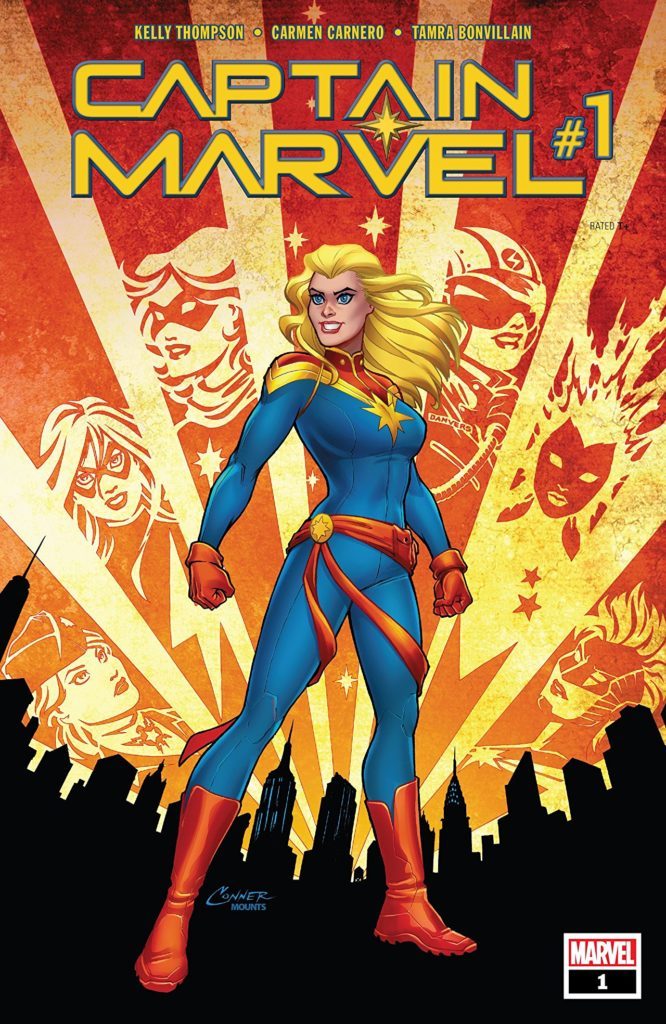 The set up is good thus far, with Carol entering a bubble of warped time to save an island of women, some of whom are heroes from her past. This promises to build up Carol’s legend going forward, giving her some down-to-earth foes to fight while she navigates love, friendship, and New York City.

Up next for me: The Ultimates, written by Al Ewing with art by Kenneth Rocafort and Christian Ward. 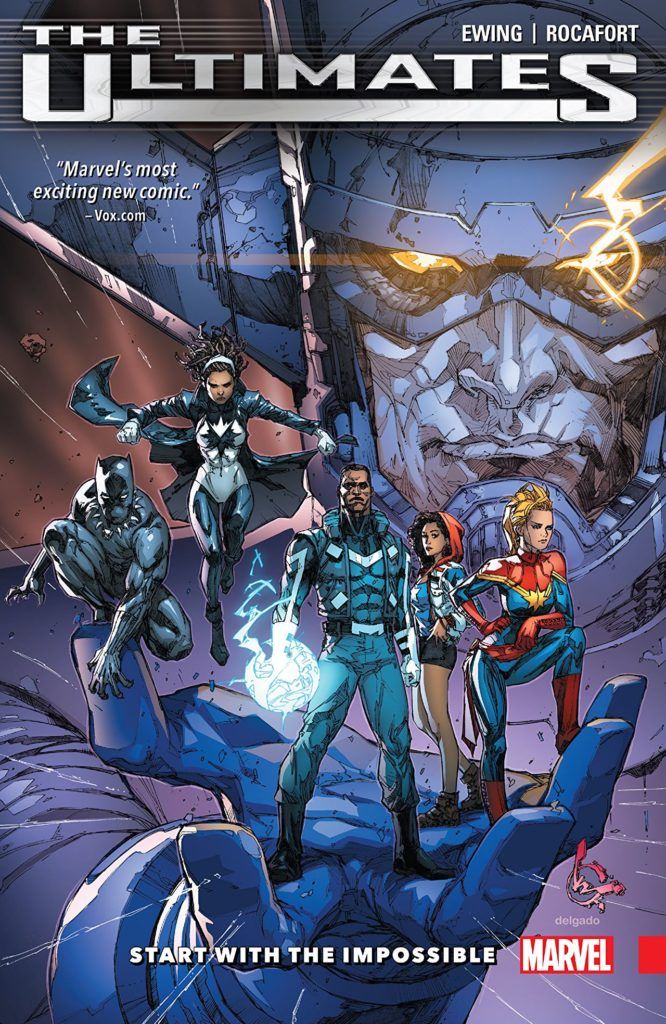 This comic combines Captain Marvel with old friend Monica Rambeau, America Chavez, Black Panther, and Blue Marvel. As we say in our reviews, this atmosphere is Black AF. It also showcases how well Carol works on a team. I’m really looking forward to it.

I’m utterly hooked now and while I’m not designing my #CarolCorps tattoo, I do understand why others are. Danvers is a hero worth stanning for. And all indications are that the movie gives her the space to shine.