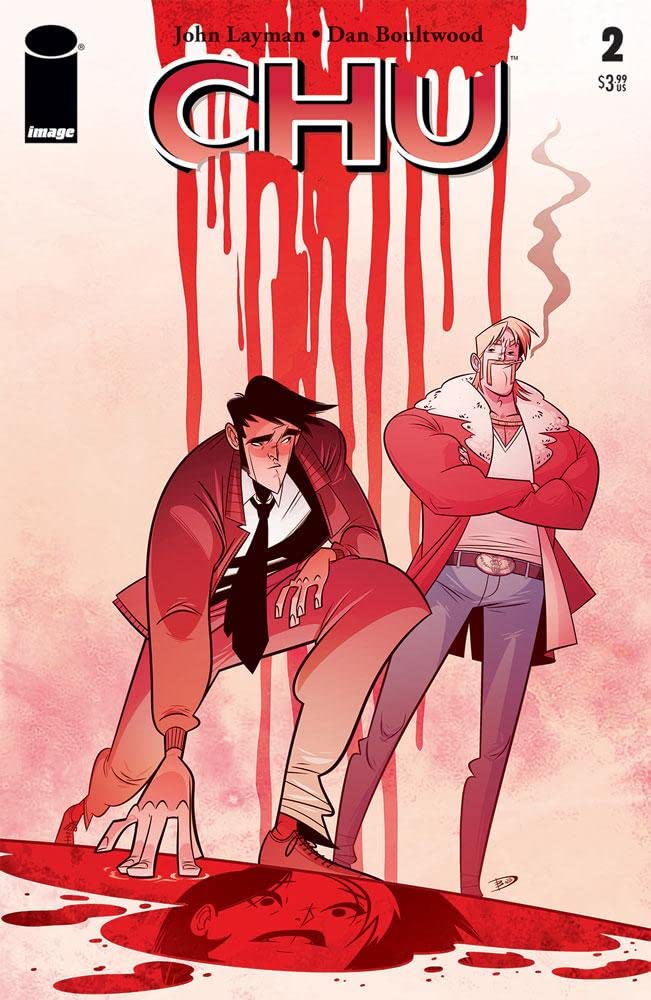 To recap very quickly: I loved Chew. I liked Chu #1 and Chu #2 has served to reinforce this opinion. To the spin-off’s credit, the series very much feels like it takes place within the same universe as its parent series. The tonal audacity of the writing, the cartoonishly violent action, the over the top dramatics: all of these are series staples and you can very easily tell that Layman is having a lot of fun revisiting this hence unseen side of the sandbox he created. The Chew-inverse has never taken itself seriously beforehand and Chu starts the issue by introducing a character straight up named Mr. Murder and the ridiculousness just escalates from there.

The moment to moment of Chu I enjoy immensely. Layman’s absurdist humor is poignant and the different types of gags that Bloutwood plays with work. It’s a very animated series and the pages are filled with an almost kinetic energy as characters viscerally react to the world around them. Furthermore, Bloutwood pays homage to Guillory’s original art that I definitely still smile at. And on a writing front, Layman effortless introduces these new characters to the world and it feels like they could have very easily existed within the preexisting context.

However, Chu #2 falters for me in a couple minor areas. Firstly, some of the exposition isn’t as tight. In the original series, as character’s powers were introduced there were typically helpful annotations that explain some of the etymology. Here, words are just sort of thrown out, and I have to parse together what’s happening either via some vague context or by looking at the solicit which breaks me out of the moment to moment I enjoy. Secondly, the pacing feels a little off kilter. Part of this may be that it is a five issue limited series, so Layman has a lot of ground to cover in a short narrative, but one of the joys of Chew was the fact that it had such an expansive universe and Chu feels hyperbolically focused on the self-contained plot at hand. And this in turn means that I still don’t feel like I know what makes Saffron tick as well as I’d like because there is a lot to cover that just takes up page counts.

And I’ll acknowledge that maybe this nostalgia warping my memories of Chew, which was a series I got to read in larger chunks. As a standalone story, Chu is clearly cooking out some cool things, but it’s also making me wonder if I should wait till it’s a complete course.