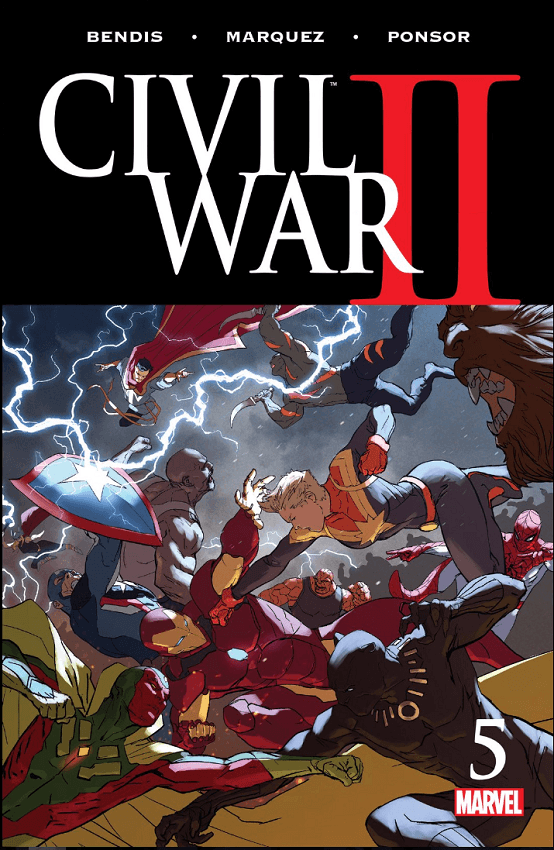 We’ve all been there: you anticipated a movie because of its potential, but then you started realizing it wasn’t really going to live up to that, but it might salvage something. Then you look up and the movie is past the halfway point and you realize that not only will it probably not get any better, but that you’ve lingered too long as it is. That’s about where I’m at with Civil War II. What I felt was a good start to this series, I’m realizing was me projecting the potential of it as it hasn’t really improved since its initial, flawed opening.

This is the first time we see some real action in the main series, as Team Carol and Team Tony finally square off in some super hero fisticuffs for the whole world to see. What is lacking in the action however, is the expectation one has as a reader and adhering to particular story beats. In the previous Civil War, the galvanizing action occurred after the combat, when a hero was killed. In this iteration, two heroes have already died and unless Bendis planned on turning Marvel into Game of Thrones, I’d be surprised to keep seeing heroes fall in quick succession. Therefore the fight itself didn’t seem to have any real stakes. There are some cool hero-on-hero moments, but nothing like some other super hero face-offs. 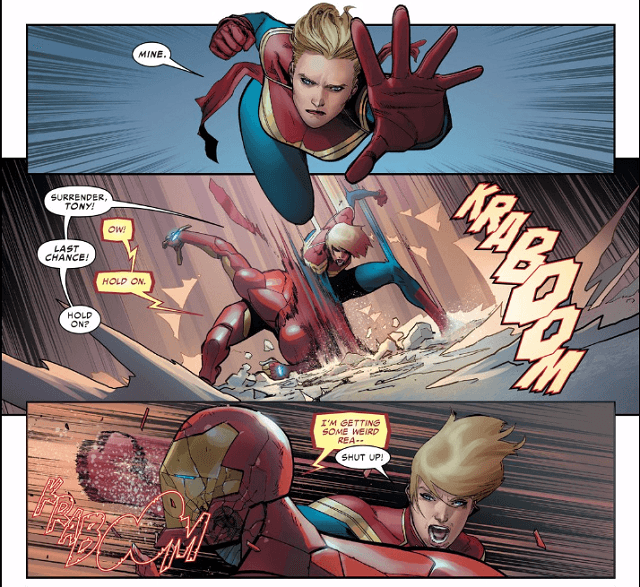 What it really is pushing towards is Ulysses’s next vision, which seems to be manifesting itself in more robust ways. Short of giving you a spoiler (it’s been out there for a while who would have the next horrific vision), it throws the heroes for a curve, but doesn’t ultimately make a lot of sense. With the Hulk, who was dangerous not because he was unstoppable, but because he would often not be in control, it made sense to see him kill an entire Avengers squad. With this new vision…not really. Like, at all. On top of this, to see the heroes follow suit for the flawed way they’ve went about dealing with this news and no one (save for one who just expresses empathy) show any surprise to this is a little jarring.

The art, per usual looks pretty good. With the focus on action this time around, the pace of movement during the fight and the expectation of giving so many heroes time to shine shows in what feels like a hurried production (even with the delay). Still, it advances the story, whether that’s a good or a bad thing.

Civil War II isn’t really getting better, but it’s far from the worst thing on the stands. Still, with so many heroes and personalities at your disposal, this book just isn’t giving us a quality story to fully invest in. Here’s to hoping (HOPING) we get a real shift in the second half of the book.

6.6 Prophecies weirdly fulfilled out of 10
Are you following Black Nerd Problems on Twitter, Facebook, Tumblr or Google+?
0 Shares