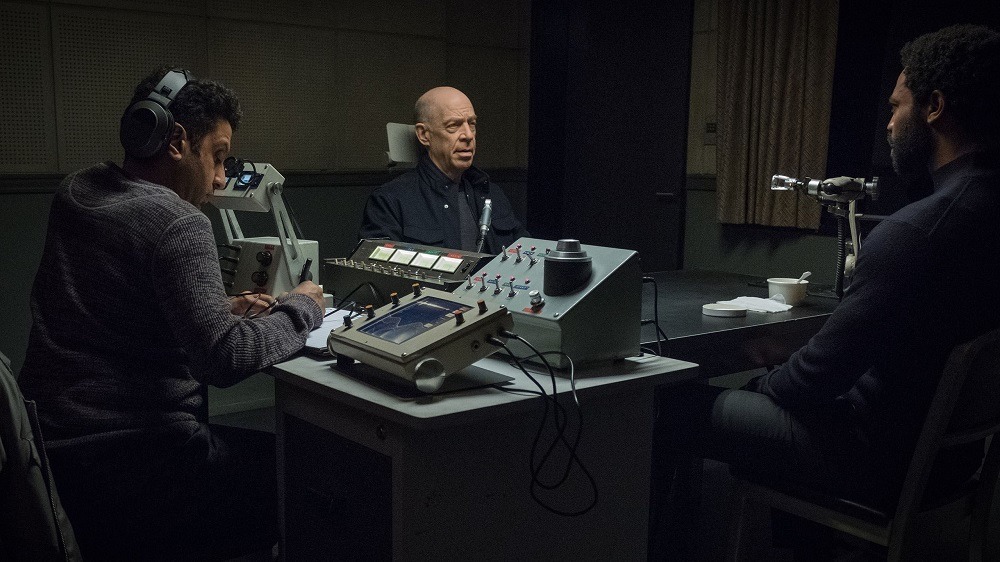 Man, Howard getting way too comfortable on Prime
7 Shares

***Spoilers be taking the proper precautions so they can’t identify the body. Previous COUNTERPART recaps are here***

Like the students of “The School” ain’t sleeping all that well on New Earth. Dude sees the party happening outside and sees what’s poppin. He gets asked to take a party crew’s pictures your boy is introduced to that new Apple life. He comes back up and his handler is like, you can’t be roaming out here when your double other still out there in the world. But your boy’s faith is restored and ready to lay that hammer down on these cats.

Never a good sign when we see cats running for their lives through an underground parking garage. Shaw got three dudes on their knees complaining about a breakdown at customs. Shaw…we feel you man. We all been there, nahmean. But wait…these dudes getting hemmed up because Prince dropped a new album and on the New Earth, Prince passed away before. At first, I’m like yo, we out here looking like we could execute dudes over a cd. But then, I’m like, wait, we would start a war to get muthafuckin’ Prince back! Yeah…we probably would yo. Might enlist my damn self.

Right before dudes get Purple Reigned all over the concrete, Shaw gets a call saying there are more pressing matters. Apparently EPMD and Howard (disguised as HIB) been causing a ruckus, so that shit needs investigated.

Howard going through HIB’s shit and sees the watch that EPMD must have gave him a while ago. except something must have went sideways cuz that shit smashed like Black Panther been doing to box office records.

But Seriously, Take This Job and …

St. Pete looking over his office thinking this shit could crumble at any fucking minute. Dude in his office complaining that Howard Silk ain’t shown up for work all week. St. Pete can’t tell him that Howard done went through the back of the Wardrobe, so he just like, aiight man I’ll handle it. Imagine having to figure out that some terror shit is coming that you don’t know if you can stop and this pencil pusher in your office talkin’ about dudes showing up for TPS reports. Fuck outta here, man.

St. Pete goes to holla at HIB just to make sure dude still breathing. SP is like, yeah, we confirmed there’s a mole in strategy and HIB is literally like, no shit. Not only strategy, but SP’s own fuckin’ floor, yo. SP gotta be lookin’ at this shit like…am I a fucking mole? They for real got no ideas, yo. SP is like, its my birthday today too and HIB is like, oh, word? So do that shit I asked you to do. 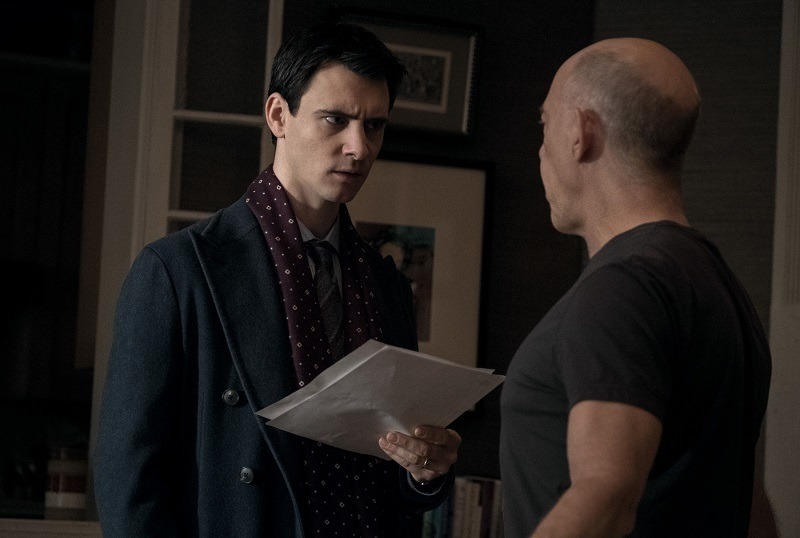 But Can I Just Enjoy This Café doe?

Howard leaving HIB’s apartment and hits diner which looks a hell of a lot cleaner than where he came from. Shit is mad hospitable until non-talking muthafuckas start occupying the spot. Turns out they are Shaw’s people. Shaw start giving him shit and they all notice that Howard ain’t got no smart ass remarks to make. Apparently, HIB roughed up these muthafuckas bad and they holding that grudge for real. Shaw wants to know about what him and EPMD are up to and it looks like we bout to get some “enhanced interrogation tactics” out of this shit.

Anna and EPMD having breakfast and Anna is like dude is acting weird…so what you know ma dukes. She worried about Howard after their talk. EPMD talking all cryptic like, don’t get used to this Howard [metaphor] cuz it won’t last forever.

Baldwin at the funeral for her other. Pretty fucked up how her portrait at the grave got her hair pulled back making her and Baldwin look even more alike. How fucked up is that you can’t pay respects to your other because you’re A) A fugitive and B) you can’t be seen looking identical over the grave of the woman being buried. She listening to her partner give a eulogy and that talk about being lonely hitting mad fucking hard man.

The Danger of Buying Organic

Man, the world bout to crumble and Clare out here grocery shopping and shit. Baldwin with the hoodie up stalking her in the Whole Foods and shit. She rolls up on her like, so, we bout to chat or I’m about leave your snapped neck next to the snapped peas. Baldwin just wants to finish the job and disappear, which is generous because Clare did order the code red on her. Before she bounces, Baldwin is like, by the way, everything bout you is fake news fam.

Shaw brings Howard into the interrogation joint. This shit looks like an eye appointment except its looking into your soul or some shit. Shit is kinda great cuz Howard can pass this bastard test with no effort. Shaw is asking questions that Howard legit don’t know the answer to cuz the muthafucka wasn’t there. Old dude in the chair is like, so I know you don’t want to hear this, but he must be getting good at this shit. He knocking this test out the park. 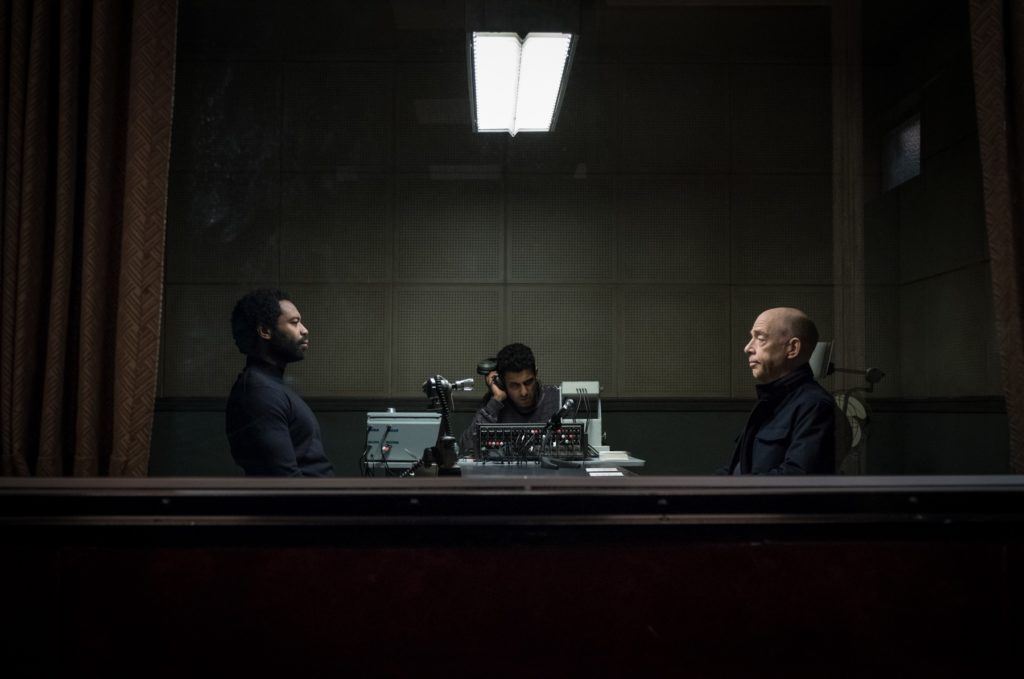 Baldwin back up in the cafe cuz who ain’t trying to get some lovin’ between assassinations? Ole girl’s name is Greta and she is straight catching everything that Baldwin is selling when gives her that phone number.

Aldrich goes to see a dude that Walter used to mess with. Seems that Walter is a guy that died unexpectedly and left a vacancy at the gig. Looks like some shit might have went down in a foul matter, so Aldrich looking into it.

HIB gets a call that the butcher might have had his tools used against him. He gets to the shop and your boy no digits on his hand longer than the second knuckle. Dude definitely got tortured for some intel.

EPMD up in the office and her boss is fed up (office looks identical to SP’s by the way). EPMD is taking some time off, but is literally getting some dirt done before leaving the premises. How you gettin intel, on the floor of the job you just got put on leave from? Legend. She gets the scoop that Shaw got Howard in the interrogation so she hits the speedforce over there before shit gets too real.

Shaw starts getting heated about how Howard can lie so well, so Howard start slipping into that HIB through osmosis training. He tells Shaw to fuck off. Then he start going in on Shaw, like EPMD gotta type of bullshit, don’t she. Shaw like, word? Cuz when she was going through detox, Shaw was there reading to her every night, taking care of her and whatnot. He like, you don’t know what that is fam. Howard is like…actually?

Right when Shaw asks if Howard still loves his not-ex-wife, EPMD come in the door, minus the four-four like, the fake, bae? She pulls Shaw into the hall and tell him that shit is a little different now cuz Howard is helping her with an investigation. Some shit she ain’t even told Shaw about. As a moment of trust, EPMD gives Shaw the address they got from the courier. Soon as they leave, dude in the chair calls Pope on one of his 18 cell phones (that they ain’t even suppose to have and shit). He give Pope the code that some shit is going down. Pope then relays some new code, probably some “get the fuck outta there cuz management is on their way” type shit. 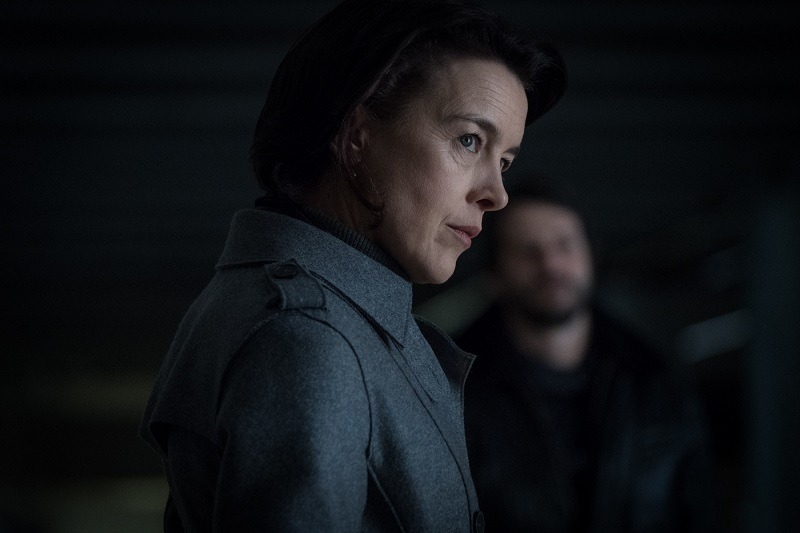 At the Club Where Everything is Murda Muzik

Baldwin at the party watching Greta get it in on the dance floor. Greta asks Baldwin how she got the scar and instead of saying “I got shot in the fucking face while trying to kill a woman in a coma at a hospital,” she says nothing. Greta is like, that’s cool, I was in an abusive relationship once too, so I feel ya. LMAO, no fam, I don’t think that you do.

Well, that shit must be Greta’s jam cuz they go back to her place for drinks, looking at photographs and some hot broken on broken action. Shit is going great, but Baldwin don’t know who to trust, so while Greta walks away, she goes and grabs the widowmaker and puts that shit under the mattress.

HIB at the butcher’s still and finds the stash. The wife asking why they removed all his appendages and teeth and he’s like, yeah, so about this whole spy thing. He hit her with the cash and told her to love the lie cuz shit is real outchea and HIB knows the drill.

HIB goes to the hotel to meet SP who, shocker is up there getting his St. Petey’s off with a prostitute. HIB kicks in the door and throws ol girl out before anybody knows what the fuck is going on. HIB hit him with that truth cuz he realized that while SP may not be a traitor, all the intel is coming directly from him. Remember that time SP was like nothing gets passed me, I’m good at my job? Yeah, me neither.

Lost Our Invite To the Cookout

On Prime, this weird ass love triangle on their way to the address. The address is currently on fucking fire though. They break out the artillery and here go Howard talking about “gimme a gun.” Yo, who. Is. This. Dude. Prime got him feeling some kind of way. They walk up on a team burning shit like this is Farenheit 451.

SP getting home after a really rough fucking day. But its his birthday and there’s still a party tonight so dude gotta keep it moving.

Aldrich briefing his team on Walter being possibly replaced by a mole. Well, he was replaced by SP…yeah…

SP doing the research on these stolen documents and notices that there’s a coffee stain mark on the copy of that shit. He like…nah, nah, nah, that can’t be right. He starts looking deeper and sees that shit on the original. Nah, nah, nah, nah. SP seeing the matrix come together like something is fucked up.

While Aldrich is convinced that SP betrayed them, your boy SP walks out to the living room and there’s muthafuckin’ Clara. Mutha.Fuckin. Clara. Holding your baby fam. Sleeping with Baldwin. Telling your fuckin’ secrets. Nah, nah, nah, fam.

Ok, but really doe, things are as bad as they’ve ever been.