David Walker has taken the task of making Cyborg a more modern, relatable hero than he’s been previously. He has taken that task and run with it at Usain Bolt’s pace. The first two issues of the half man/half machine Justice Leaguer’s solo comic have revealed a more personal layer to the character that hadn’t been seen previously. Can Walker maintain the momentum in character development while still delivering on quality action and afrofuturism (I’ve been waiting to use that word in a review)?

Issue #3 pits Victor Stone against a mysteriously crew of tech based aliens who have invaded Earth in search of….something. Walker has jettisoned a lot of the character building in lieu of more good old fashioned superheroing. For the most part, the change in pace is fun and allows Ivan Reis to strut his stuff visually, but it makes for what feels like a much shorter, more on-the-nose thrill ride of sorts. 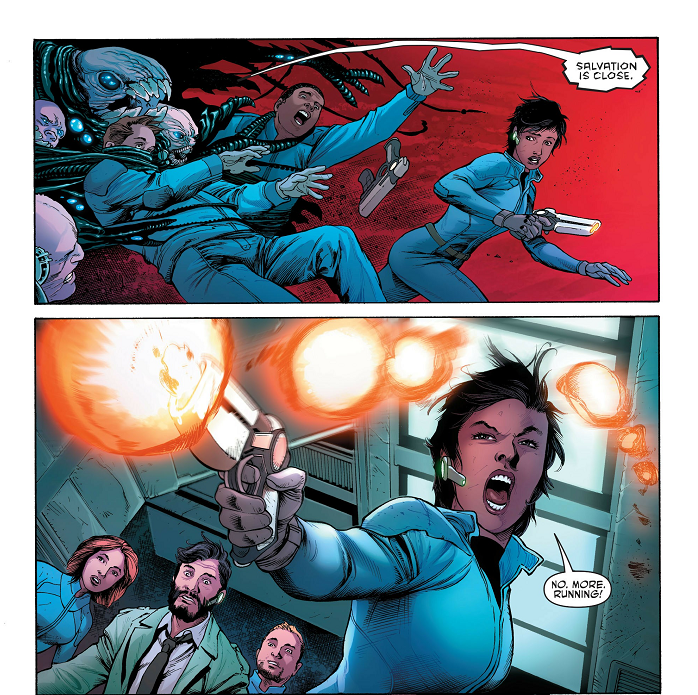 The supporting cast has been built up enough that they’re pretty entertaining when the shooting starts. Also, the special guest appearance during the battle is pretty much worth its weight in gold (or iron…or platinum…or silver) if you kept up with Justice League during the Forever Evil tie-ins. Ivan Reis does a great job but the absence of Joe Prado’s ink work is obvious. A couple of panels aren’t as clean as the previous two issues.

Bottom Line: Not quite as perfect as the book has previously been visually, but the turn-up action wise is fun enough that David Walker maintains a solid book overall.