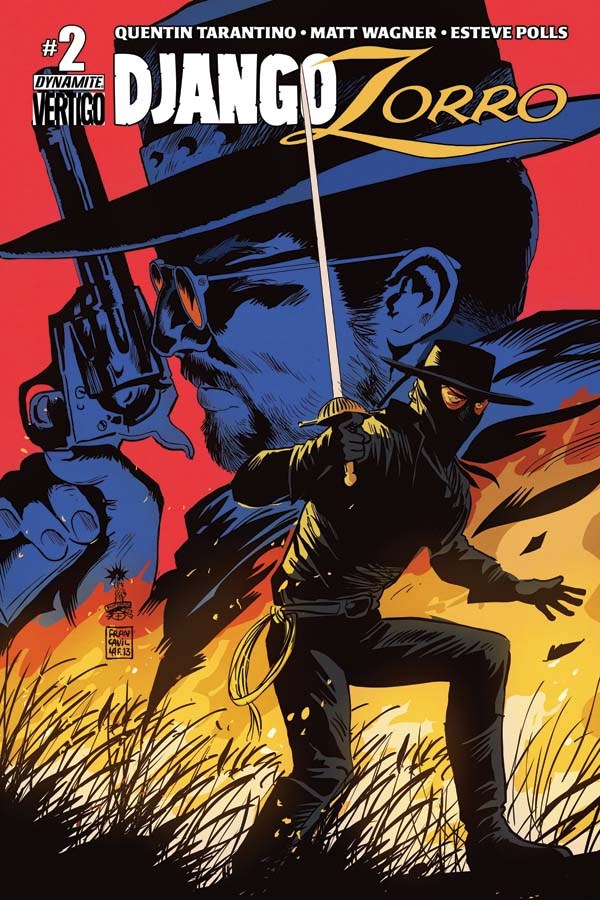 The Django/Zorro series is still living up to a boyhood fantasy I never knew I had– seeing two of my favorite characters working side-by-side.

But the latest issue of Django/Zorro didn’t really feature these two that much. Instead, it took a completely different turn and focused on the villain of the series, Gurko Langdon, a.k.a. the “Archduke of Arizona.” (….really?)

Through the eyes of Alric Langdon we learn that Gurko Langdon is highly ambitious, meticulous in his planning and has insane amounts of foresight.

At first he comes off as a fairly-decent man with a pocket full of dreams that looks on as his son plays with a child his own age, a young “peasant girl” named Conchita, for the first time in months. He then chooses to become a surrogate father to the girl. Very respectable.

Langdon then goes through with a plot that includes him dropping the kids off at a boarding school, nearly going bankrupt to make up a fake family for Conchita, who he’s renamed, and joining a monastery to gain access to their most secure secrets and knowledge.

Then sh*t got weird…

So, Papa Langdon pops back up on the scene and sees Alric and Conchita, now grown and most likely in love, for the first time in 11 years. What does he do?

He tells Conchita that he did all of this so that he could marry her and take on her wealth, which through fake documents, includes all of the Arizona territory.

I instantly went from respecting this man’s determination to thinking he’s the biggest f*cking creep in the world that adopted a little girl knowing that he’ll one day marry her. Wtf?!?!? I blame this on Tarantino.

It makes me uncomfortable on so many levels, but if the goal of this issue was to make me dislike the villain so that I like it when he gets what he deserves later on, consider it accomplished.

The biggest problem I had with the issue didn’t even come from the Langdon angle. It came from the light-hearted, so-predictable-it-didn’t-need-to-happen pissing content between Django and Diego.

“I have a sword and it can do this! *stabs something* My weapon is superior!” – Diego de la Vega

“Yeah? Well, I got’s a gun and it does this! *shoots same something* I win…” – Django Freeman

Oh, except for Diego saying that they’re going to fight the “Archduke of Arizona”  because he’s enslaved the natives to do his manual labor.

Yeah, Gurko Langdon profiting off of slave labor is a horrible thing, which Diego mentioned. But he didn’t really seem to care about that as much as finding an excuse to fight someone.

Of course Django is down to ride on those who endorse slavery. He’s dealt with it his entire life. But for Diego, I’m expecting there to be more revealed behind his motivation to take out Langdon in coming issue.