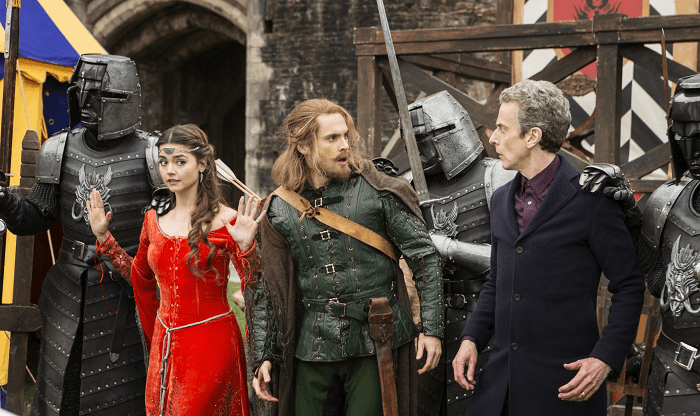 We’re in the third episode of season eight, and now the Doctor has gone medieval with the Prince of Thieves. In the beginning of the episode, we see the Doctor writing a bunch of equations on a chalkboard, presumably the same equations we’ve seen him brooding over in the last two episodes in what will surely be revealed as part of a larger storyline (surprise!). The Doctor asks where Clara wants to go in time and space, and in a legitimate fangirl moment, she says she wants to meet Robin Hood. The Doctor scoffs—in case you are suffering from short-term memory loss and forgot that he’s an asshole—and says Robin Hood doesn’t exist. Of course, they immediately find Robin and once again, in what seems to be the norm for this season, Clara is proven right and the Doctor is proven to be a narrow-sighted old man.

Robin—winking, whooping and bantering with a campy, dramatic bravado reminiscent of that of his furry incarnation in the 1973 animated Disney film and Cary Elwes in the 1993 Mel Brooks classic—tries to steal the Tardis, naturally. In a scene that foreshadows just how ridiculous and corny the episode will be, Robin and the Doctor have a sword fight—Robin with his sword and the Doctor with a spoon.

Clara and the Doctor get to meet Robin’s Merry Men, but the whole time the Doctor continues to question whether they are real. He examines them, pokes them, takes samples and generally makes everyone uncomfortable. Oh, and he hates their laughter and “bantering” and merriment because, remember, he is an old cranky man. Make sure you don’t forget that. … But just in case you do, don’t worry, because there will be an infinite number of reminders throughout the episode.

Robin enters an archery contest against the evil sheriff in town, who has been collecting more than his share of riches for the poor and terrorizing the people. Of course it’s a trap, but the prize is a golden arrow. Robin easily schools the sheriff, but then the Doctor barges in to show off, and it briefly becomes a testosterone-fueled contest before the Doctor uses his sonic screwdriver to blow up the target, thereby getting them all arrested by the sheriff and (another surprise!) his killer robot alien knights …  who turn out to be useless and not even worthy of the label B-grade Cybermen. But more on that later.

Clara, Robin and the Doctor get put in shackles and thrown into prison and the men are too busy arguing with each other to be anything more than impotent little boys with large egos. They even argue about who can die slower from starvation, which warranted flat faces from Whovians everywhere. A guard, who had been eavesdropping on their conversation to see who was the ringleader of the operation, decides that Clara must be the leader because she’s the only one who has sense in this episode, apparently. He takes Clara to the sheriff, and she charms the evil plan out of him.

Best quotes from the Robin Hood-Doctor beef in episode three:
Doctor: “Shut it, Hoodie.”
Doctor: “long-haired ninny”
Robin: “desiccated man-crow”
Robin Hood: “You have a sickly aspect to you. You’re as pale as milk”
Doctor: “Oh god I think [Robin] soiled himself”

Meanwhile, the Doctor and Robin manage to escape the prison and discover the control center of the spaceship, which, as they discover, was headed toward a destination called “The Promised Land” (gee, that sounds familiar. I wonder where we’ve heard that before).

Robin and Clara manage to escape, but the Doctor gets captured and thrown in with the peasants working under the command of the robot knights. The Doctor gets the peasants to fight the robots using metal trays and plates (deflecting the robots’ laser blasts back at them), and Robin and Clara come back to the rescue. Robin and the sheriff have a dramatic sword fight on an elevated beam during which Robin uses a move he learned from the Doctor in their fight earlier in the episode (::insert groan here::).

The sheriff falls to his doom and they leave the castle-ship, but the remaining alien knights still try to escape despite the fact that they don’t have enough gold to get the ship to function properly. As it is, the ship is set to explode and take everyone with it, so Robin, the Doctor and Clara take that gold arrow from earlier and in a totally Death Star move, use teamwork (::insert second groan here::) to shoot it directly into the right area of the ship, allowing it to launch into the atmosphere before exploding completely. No, engines don’t work that way. No, it doesn’t make sense. At this point, we’re just going to have to go with it.

The Doctor and Robin have a bit of a bro-bonding moment (as the Doctor has finally acknowledged the existence of the man he’s been arguing and fighting with the whole episode) and the Doctor goes back to making his sour milk face and brooding about what it means to be a hero/legend.

I didn’t like this episode. There it is. Sure, it was funny at times, but overall, it didn’t measure up. First, let’s talk about the humor. With this Doctor, head writer Steven Moffat is really pushing for the whole dark-and-brooding-asshole personality, so much so that it’s overwrought and makes it difficult for there to be a large variety in tone throughout the show. For now, all we’re seeing is this one side of the Doctor over and over again—he’s cynical, he’s cranky, he’s mean in one episode, then he’s cynical and cranky and mean in the next. Of course, we’re only three episodes in, so we still have a while to go with Capaldi. But because of the limitations caused by the twelfth Doctor’s dickish character, it’s also difficult to get some variation in the type of humor that can work in this new season. The previous two Doctors were young, curious and quirky, but they also had their moments of cynicism and pain. Those moments of cynicism and pain informed the happy moments even more, and vice versa, and those emotional and dispositional shifts in the Doctor were also vital parts of the drama and comedy in the show. This Doctor is less quirky and less willing to play compared to his previous incarnations, so the attempts to draw out that same kind of humor with this Doctor will fail. That’s why the fight between the dangerous utensil-wielding Doctor and Robin Hood in this episode felt so corny. Fight with a spoon? Maybe the eleventh Doctor. Maybe the tenth. The twelfth? Not so much.

But that wasn’t the only problem with the episode. Here was another storyline that didn’t really dazzle or excite. It relied so heavily on the squabbling of the Doctor and Robin (which was funny at first but then got played out) and hero/villain cliches and not much else. Surely, you have to take into account the message of the episode, about the romanticization of history, particularly of a hero, that allows a person to be more than they are—a legend. So it follows that the episode would be rife with the cliche elements of the Robin Hood mythology. However, even when there’s this heroic figure who splits arrows with his own and sword fights villains from great heights in scenarios that are untouchably classic, the whole point of the Doctor is that he is his own walking, breathing myth who steps into these different histories and mythologies and in some way changes them—and we didn’t see that as much in this episode.

The antagonists of the episode were neither unique or interesting. The sheriff was the stock bad guy who wanted to take over the world and was distracted by the charms of a central female character. The robot knights weren’t intelligent or threatening (they were defeated by dish ware for godssakes! They were basically thwarted by Home Goods).

Another problem I have is that this Doctor seems to always be too cranky to actually be useful. In the last episode, Clara joked that she was his “carer,” which is definitely true. The Doctor’s companions have always been his carers to some extent, but there was also a sense of a more balanced partnership in how they would work together to solve problems. In this season, Clara has had to mature into a more responsible character who can see the bigger picture when the Doctor can’t. Even though this Doctor looks older—and literally is older—he still needs just as much help as before, if not more, because he’s so wound up in his identity crisis.

My last problem with this episode is the heavy foreshadowing to the bigger storyline. Don’t get me wrong—foreshadowing is important. But if you’re too heavy-handed with it, it distracts from the immediate storyline and also builds up to something that may not live up to the hype. OK, I’m having a cynical twelfth Doctor moment right now regarding this Missy/Promised Land storyline (which may or may not be related to the Journey Blue/Danny Pink curiosity from the last episode and the equations the Doctor’s been obsessed with), just because Moffat loves building up to bigger storylines, but the results are usually hit or miss. Sometimes the pieces fit together beautifully, and at other times they seem mashed and cobbled together, fitted with some nonsensical logic that definitely breaks the already tenuous rules of the Whovian universe (::ahem:: the Eleventh Doctor getting another life—thereby totally confusing the count that was previously confused by the addition of the War Doctor—and using his regeneration powers to shoot Daleks out of the sky ::ahem::).

My point is, we’ve still got a ways to go, and Moffat’s got quite a few expectations to live up to. Thankfully, next week’s episode looks like it’ll be a good one, with a bit of horror and suspense. Check back in for my recap and take on episode four.