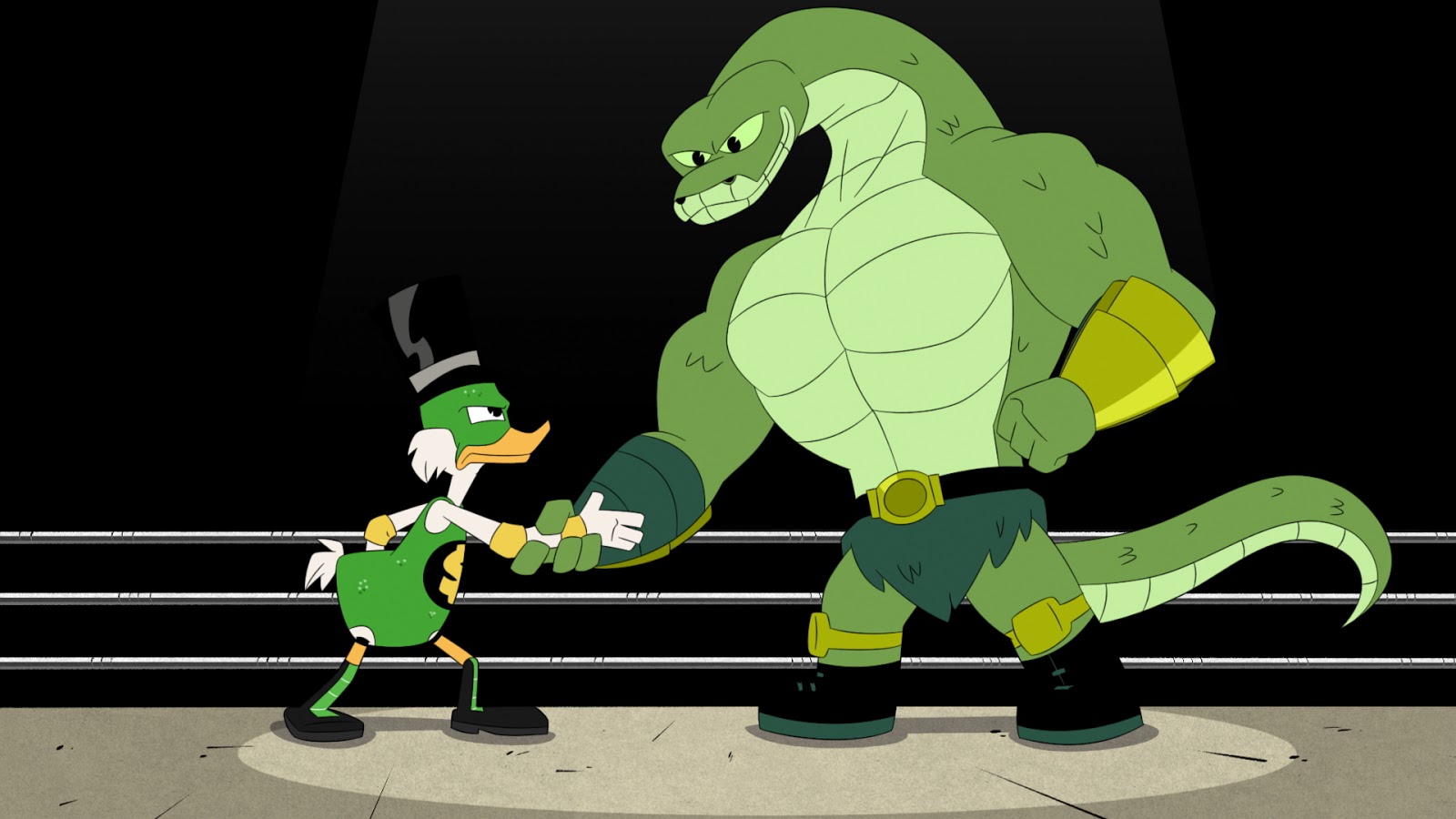 Every so often the stars and planets align for two things you love to intersect. I am so glad to have lived to see such a thing occur. I ain’t even going bury the lede on this: the DuckTales reboot did a wrestling episode titled “The Rumble for Ragnarok!” and on kayfabe, it is everything. Every-fucking-thing. Y’all don’t understand — I fucks with DuckTales and pro wrestling heavy. To know me is to already know by my Twitter feed.

I had a feeling the DuckTales-wrestling may occur when in a totally unrelated episode, Mrs. Beakly hit a fucking tiger/snapdragon-esque suplex. You don’t add that amount of detail to a suplex unless you’re a wrestling fan.

DuckTales keeps making hit after hit, and this wrestling episode is no different. The Rumble for Ragnorak! centers around Norse mythology, as Scrooge tells the kids how every 10 years, Jormungandr, a serpent large enough to encircle the world shapeshifts into an anthropomorphic snake humanoid form and battles Earth’s champion in Valhalla. If Jormungandr wins, then Ragnorak (AKA the end of the world) begins. Scrooge tells the kids because he is Earth’s champion and the torch will eventually be passed to one of them: Webby, Huey, Louie, De–… Webby. Scrooge breaks all this down as we enter Valhalla as we enter we see that this battle is set up as a best of three professional wrestling match. This tradition is so old that pro-wrestling copied them. I love it and just when I couldn’t possibly love it anymore, we see how the Valhalla crowd reveres Jormungandr making him the babyface (hero). Which means the heel (bad guy) for this, is Scrooge McDuck?!

What a turn of events!

YESSSSSSSSSSSSS! I fucking loved this! Seeing Scrooge as the bad guy here is hilarious. I love how he’s thrown in full character and his whole gimmick is a nod to The Million Dollar Man Ted DeBiase. It makes so much sense: Scrooge arrives there every ten years preventing Ragnarok, of course he’d be the bad guy. This was genius. The best part for me was Dewey, who is the kid that has to stand out and wants to be seen as a hero, couldn’t understand Scrooge being the heel. He knows the hero Scrooge is, but Scrooge tells him, “It’s alright. What matters is I’m doing the right thing.” AND THEN GOES FULL-ON HEEL!

I. Was. Fucking. Dying. This is genius and speaks to so much on storytelling, especially in pro-wrestling. Scrooge keeps emphasizing that he’s doing the right thing. He’s the bad guy here in Valhalla but justified from our point of view. The same argument could be made for Jormungandr: he’s not a bad person, it’s simply his role in Norse mythology to bring about the end of the world. There’s gotta be a winner and there’s gotta be a loser. The hero is really a matter of perspective. Scrooge is fine being the heel but Dewey can’t accept that. Also, can we talk about how Scrooge is old as fuck and busted out the most beautiful shooting star press? What?!

I never thought I’d live to see the day Scrooge McDuck hits a shooting star press! Again, you can’t pay homage like this unless you got some folks on staff that really fuck with wrestling. This is glorious. There’s so many other homages to wrestlers riddled in the show like The Undertaker nod and of course, other pop culture characters.

Down goes Scrooge but a new Champion rises 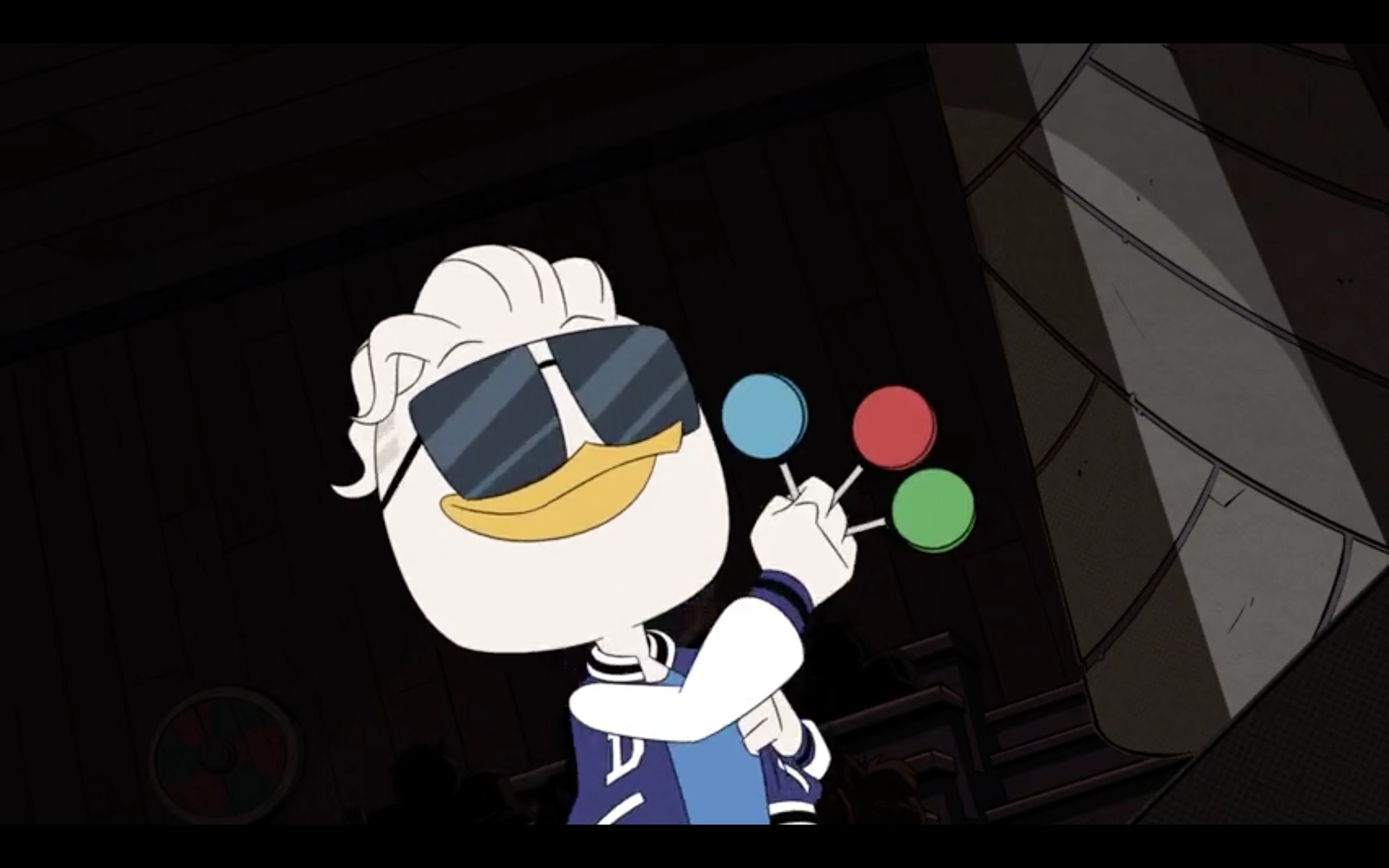 When Scrooge takes a chair thrown in the ring for Dewey and the impact throws his back out, the kids gotta step in. I enjoyed how we see Scrooge more vulnerable here and showing that he is really really… really really really up there in age. This could also be shown as a low-key tribute to how legit the world of pro wrestling is. Allow me this tangent right quick: sure the outcome is known in pro wrestling between opponents but there’s no safe way to take a chair across the back or a powerbomb through a table, or ring which is just plywood covered by a thin foam, or on the apron (if you’ve never heard an announcer say it, it’s the hardest part of the ring). Any move can hurt or kill you. Folks have been paralyzed doing this, people have died in the ring. You can’t just do a Sasuke special to the outside of the ring or a freaking corkscrew moonsault off the top rope without being an athlete. Shit is real out there.

Anyhow, Dewey comes up with the Champ Popular persona to make the crowd like him, but it backfires horribly ’cause the crowd still ain’t fucking with him. I love it ’cause I feel like Dewey’s Champ Popular gimmick with the lollipops was a nod to both Dolph Ziggler and Joey Ryan. Too bad the audience wasn’t buying it and still booing that boy, just like a wrestling audience does. The audience shouts that his catchphrases are forced and find any reason to hate him. Dude, that’s a legit wrestling crowd. They can smell how desperate Dewey is to gain their approval which makes ’em sick. Your girl Webby, though? Webby out here embracing her inner Razor Ramon (Read: bad guy.)

Say hello to the bad gyal

Illest Tag Team To Ever Do It

Team Earth lost that second match, Dewey done took himself out the game ’cause he can’t handle the pressure. Scrooge goes and talks to him but calls in help for the third match, an over-the-top rope elimination/pin-fall match against Jormungandr. Scrooge called in back up, and maaaaaan! Mrs. Beakley came in with that steel chair equalizer with the quickness. Once she and Webby started getting their tag-team double team on it was over. Listen, Mrs. Beakly raised and trained Webby Vanderquack to not only be a hand-to-hand combat monster but a fucking Lucha Libre prodigy. Look at the moooooooves.

Jormungandr got all fo team earth down but after Louie tells Dewey that his hero will come out through his actions (lowkey playing the good valet/manager role in pro-wrestling), Champ Popular is back in the fight. …If you wanna call it that, cause Jormungandr beat that boy’s ass something fierce. Jormungandr ain’t have to do that middle child like that man. I mean, damn. Webby can fight and she only got tailwhip out the wring. Jormungandr was out here stomping Dewey de fook out. I counted two buckle bombss, a cannonball into the corner, then he elbow drops Dewey all on his spine and back of the neck? How much does this guy even weigh? Yeezs, man. He beat that boy so badly and so one-sidedly, that the crowd said gaw dayum.

Once Jormungandr started popping shit though, that’s when he lost the crowd and things changed. The crowd sees Dewey, outclassed, and outmatched, saying the pop don’t fucking stop. And then that magical moment happened, the crowd began to pop (cheer/get behind) for Dewey). That’s wrestling 101, someone you can’t stand gets they ass beat so much that you start to sympathize and all of a sudden, they’re now the underdog. in any genre, everybody loves an underdog. You see someone trying their heart out “good” and “bad” begins to fade cause you relate and empathize. You then wanna see’em succeed. Dewey stayed true to himself, went out as himself, and got “over” by being his true self in front of the crowd.

When Strongbeard, a previous opponent, throws a piece of his beared to Dewey, granting him strength, it’s game the fuck on. Dewey got buff and came for Jormungandr’s ass. Went upside dude’s face then grabbed’em by the tail and flipping him like I-hop pancakes on that matt. The disrespect! Good. Get your revenge Dewey! Man, when that boy hit Jormungandr with a guerrilla press pop up sit-out powerbomb. What. The. Foooooook?

You see the height on that shit too? Jormungandr landed all up on his neck too? That (snake) man is fucking done. He big done. He got a decade to sleep that L off. Gawd dayum. Fam, it’s one thing to hit a powerbomb, but don’t get me sky-scrapper high for all of Valhalla to see and drop me on my head. Jormungandr got a powerbomb from a tween, man. Ain’t no coming back from that… well, for another ten years at least.

The cutest moment of all this is Scrooge walking up to Dewey as he’s getting handed the Heavyweight Title and telling him that he’s got grit and that he’s proud of him. Dewey asks why he’s whispering and Scrooge says, “so I can do this,” snatching the belt and flaunting it in front of the crowd. Huey on announcing with LP shouts, “The Miser turned on his own nephew! What a heel” and Scrooge says, “That’s right! Unless Champ Popular can stop me.” That scene, that right there, is wrestling in its truest form. As one story closes another twist occurs to keep you captivated, as well as the older generation facing the younger generation out of respect and that fight being the baton pass for that next generation to begin their reign. I love it. That’s the heart of wrestling, man. 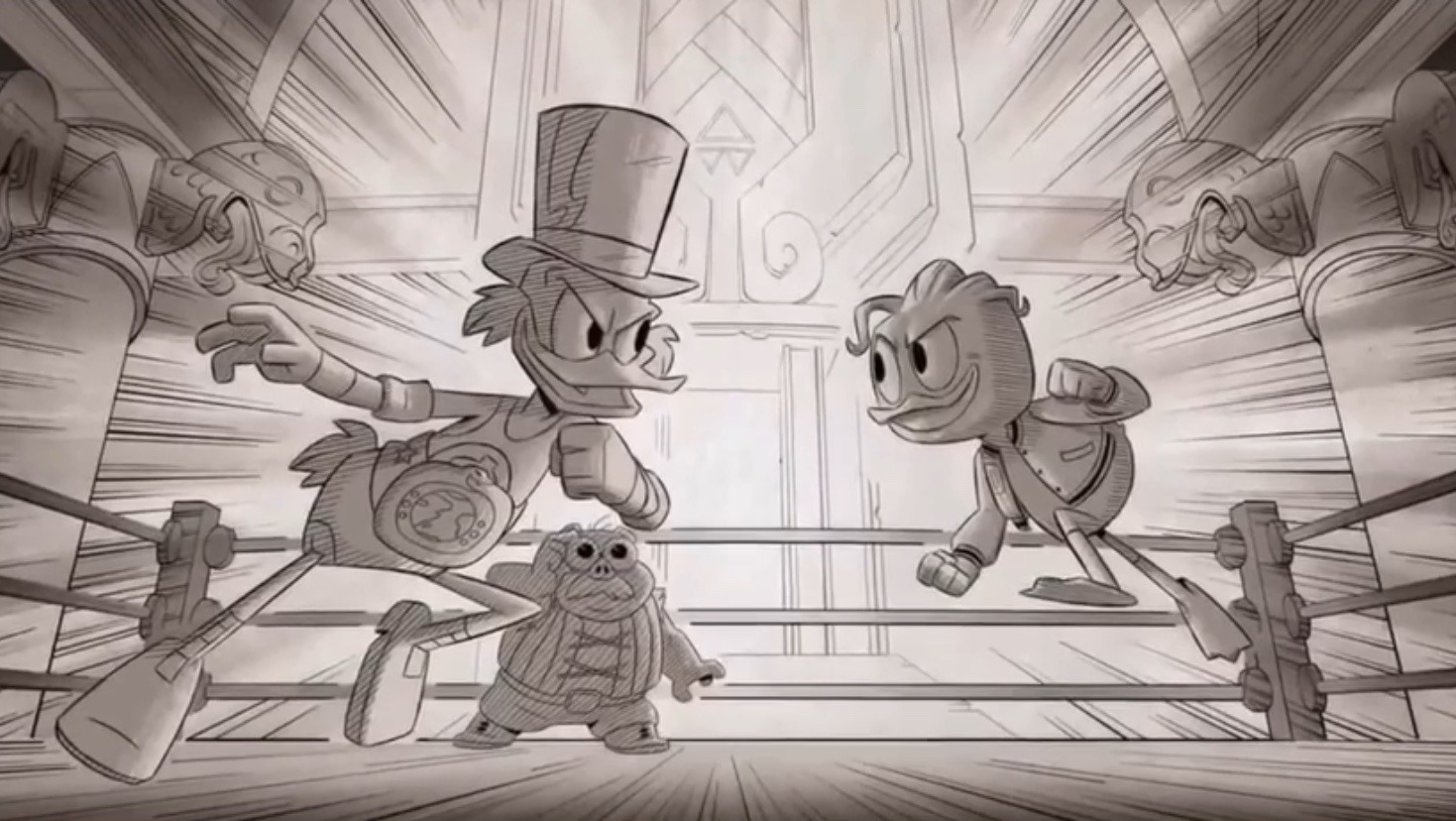 Dewey already won the crowd over from defeating Jormungandr, their former top babyface. Now if Dewey beats Scrooge, he’s beaten the top heel to solidify his path and place with the crowd. Even if Dewey loses to Scrooge, the audience will still be behind him due to him being betrayed and they’ll wanna see Dewey, who is now a face, get his due. *claps hard as hell* That is great pro wrasslin’ storytelling, folks. Bob Snow wrote this episode and Tanner Johnson directed it. The DuckTales reboot proves once again they got this storytelling shit on lock. Each DuckTales episode manages to keep them hits coming and to take something like wrestling and not only showcase it well, but pay homage to all its details. It makes it such a delight to be a fan of this show.