[divider type=”space_thin”]
It’s a glorious time for Sailor Moon fans: This month, Viz Media and Eleven Arts are presenting Sailor Moon R: The Movie at more than 300 theaters across the U.S. The film, which was originally released in 1993, is having its first theatrical debut, with a great brand-new dub, so fans can see Usagi and friends save the world on the big screen. In honor of the theatrical premiere of Sailor Moon R: The Movie, here’s my list of important lessons I learned from Sailor Moon R.
[title type=”h2″]
Anyone (and Everyone) Can Be a Cock-Block[/title]
Fans of the series know that Usagi has always been weirdly insecure about her relationship with Mamoru, despite the fact that we know—and she knows, and he knows—that they are pretty much already married because they had the whole Romeo-and-Juliet plot line happen while they lived in Crystal Tokyo, and not to mention the fact that they have a goddamn child together. OK, so I suppose anyone can have insecurities no matter what their relationship situation is, but it’s always sweet to watch Usagi and Mamoru have their romantic moments where they come across as secure and comfortable in their relationship, and wholeheartedly committed to each other.

Right in the beginning of Sailor Moon R, Usagi, Mamoru and the scouts are off on an outing to a botanical garden, where, in a private moment in the greenhouse, Usagi decides to put the moves on Mamoru. You’d think your own daughter, whose very existence is the result of your current relationship, wouldn’t be a cock-block, right? Wrong. Because we all know about Chibiusa’s strange and uncomfortable Electra complex, which makes her a horrible, jealous little child who occasionally tries to sabotage Usagi and Mamoru’s private romantic moments. And then the scouts get involved too, spying on Usagi and Mamoru and ultimately pranking Usagi. Not cool, guys. Not cool. [title type=”h2″]Even an Alien Childhood Friend Can Become a Crazy Ex[/title]
Let’s not even use the word subtext or undertones here. Sailor Moon has never been shy about portraying LGBTQ characters and relationships, so to demote the relationship between Mamoru and alien-bad-guy Fiore to just a “homoerotic” friendship is to simply disregard how refreshingly open this series was about its depiction of different kinds of love (even though those depictions were changed or totally censored out in the U.S. dubbed version).

Mamoru and Fiore establish a connection when they’re just kids, right after Mamoru’s parents die in a car accident, and after Mamoru shows him kindness, Fiore promises to search the universe for a flower worthy of Mamoru. (Tell me that’s not romantic. I don’t even like flowers and I find that romantic.) And the way Fiore interacts with Mamoru and the jealousy and possessiveness he feels for him—I could go on and on, but again, we’re not just talking about subtext here.

The possibility that Mamoru and Fiore have a homosexual relationship comes up blatantly in the conversation the sailor scouts have after they witness the reunion Mamoru and Fiore have. Usagi questions if they were “just” friends, and Ami makes a comment about how Mamoru seems to be popular with both girls and guys. This spurs on further conversation among the scouts about “that kind” of relationship and how nothing’s wrong with it. In fact, nothing does seem to be wrong with it, with the way it’s discussed among the scouts.

The only issue seems to be that Mamoru might have been, or might still be, deeply emotionally connected to another person—well, alien—and Usagi’s concerned about it within the context of their own relationship. Despite the somewhat othering language of “that kind” of relationship that they discuss (which may be more an effect of the writers trying to maintain a bit of vagueness in that moment), the treatment of a possibly queer relationship between two male characters (or at least a queer love on the part of Fiore, if it’s not reciprocated by Mamoru) is as nothing too out-of-the-ordinary. The problem isn’t that Mamoru’s alien ex-friend/boyfriend is back; the problem that his alien ex-friend/boyfriend is back and he’s crazy and wants to destroy anything. Which is a very valid concern. 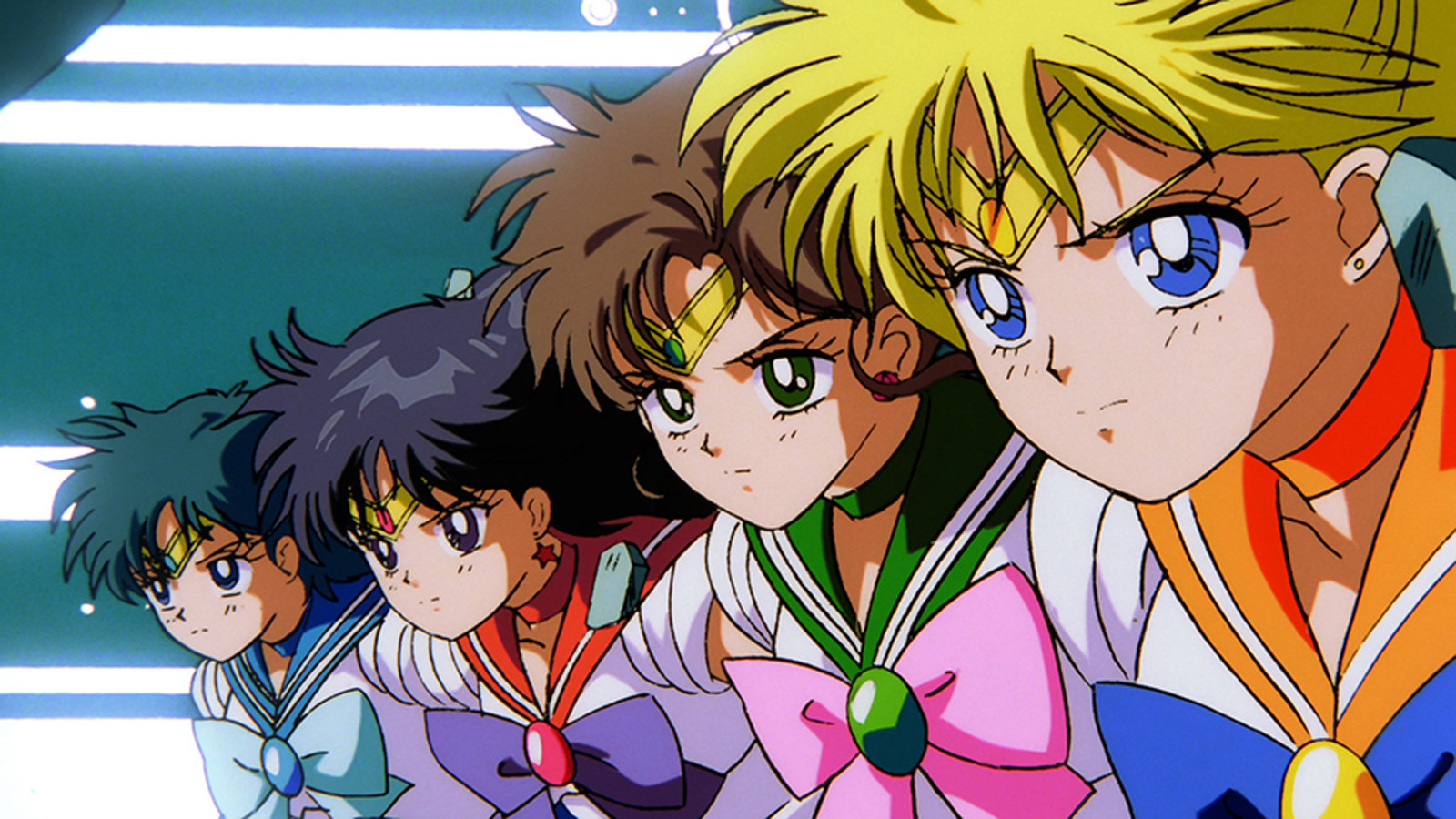 [title type=”h2″]Throwing a Rose at an Opponent in a Fight Can Actually Work, Apparently (under very specific circumstances)[/title]
Oh, Tuxedo Mask. You really are quite useless, aren’t you? Even if we disregard how strange and impractical it is that Mamoru goes around Tokyo at night fighting (or not fighting; usually just preaching at Usagi about how she has the inner strength to win the fight) in a tuxedo, which must give him a pretty consistently high dry-cleaning bill, it’s tough to justify how his primary weapon of choice is a rose. Yes, he has his staff and occasionally a sword, but let’s be honest: This dude needs to sign up for Tiger Schulman’s or just take some basic self-defense courses or something, because he’d get his ass handed to him in a playground fight. Truth be told, I’m not that mad about Mamoru’s lack of skills, because it means Usagi can take more credit for her work as the all-powerful, badass woman star of the show.

So Mamoru has been throwing roses for years, temporarily distracting villains without doing anything of much actual use. Finally, finally, in this movie we have an instance—perhaps the only instance—where his throwing a rose can actually make a difference in a fight, because if we think about it, throwing roses is just another unnecessary waste of money; how much is Mamoru spending on these roses each week? [title type=”h2″]Sailor Moon Did the Whole “Reincarnated Hero” Thing Before It Was Cool[/title]
OK, so maybe Sailor Moon wasn’t the first to pull the Lazarus trick, but she’s still got more balls than a lot of other heroes. It’s hard to keep track of all the times she sacrificed herself to save her friends and family, but the ease and confidence with which she makes that decision in Sailor Moon R is a bit heartrending. I have to admit, despite all the times I’ve seen Sailor Moon pull the ultimate-moon-sacrifice bit, I still got choked up about it when I saw it again. [title type=”h2″]Compassion, Love, Empathy and Understanding Win in the End[/title]
As cheesy as Sailor Moon may seem in retrospect, especially to people who perhaps did not grow up with it, it did have a message worth taking to heart about the importance of compassion. Right now we’re in an age of superheroes who are dark and complicated, who sometimes make controversial decisions for the sake of the greater good. Before that, in the golden age of comic books, we had heroes who were wholly good defeating villains who were wholly bad; there wasn’t much room for shades of grey.

The important thing about Sailor Moon as a hero is the fact that she fights with compassion and tries to understand others, and that she gets her strength and her power from her resolve to keep her loved ones safe. While she fights Fiore, she also tries to reassure him, and she and the scouts empathize with his feelings of loneliness and neglect. In the Sailor Moon universe, compassion and empathy win, which is not always true in our real lives, particularly as we consider what we face today as a country. At least in Sailor Moon, we can be confident in a collective female strength that ultimately trumps backward, exclusionary thinking; hatred; and fear.

You can check out limited-time screenings of Sailor Moon R: The Movie in select theaters across the country. The screenings also feature the North American theatrical debut of the Sailor Moon short, Make Up! Sailor Guardians. Both English dubbed and English subtitled showings of the film are being offered, and the English dubbed screenings will also be preceded by an exclusive interview and introduction by Stephanie Sheh, Robbie Daymond and Ben Diskin, the English dub voices of Usagi, Mamoru and Fiore, respectively.

For the full theater listing, and to find additional information, visit Eleven Arts.

And watch the trailer for Sailor Moon R: The Movie: