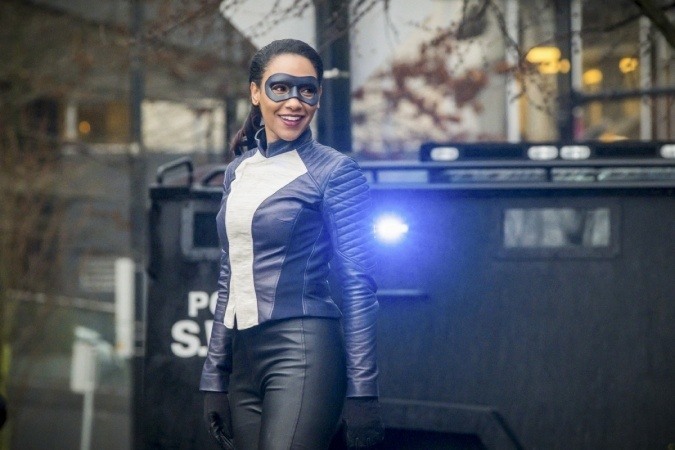 We kick off this dope episode of The Flash with Cisco and Harry turnt off the esibles having a Bill and Ted type thinking session, where Harry comes up with a way to “be smarter than DeVoe”. His big breakthrough involves recreating DeVoe’s thinking cap transformation. Cisco ain’t wit the shits. He like, “Sooo you want to blast yourself with hella dark matter to boost your intelligence? Soo a super smart guy wants to do the same exact thing a super smart guy did before he became a bloodthirsty megalomaniac?! Good on all dat shit fam.”

Ralph storms off like a kid who doesn’t get his way in Toys ‘R Us. He salty as the Dead Sea cuz his head still on the chopping block, but Cisco refuses to help Harry go all Megamind. In comes a classic Flash pep talk! Iris stops him at Pep Talk elevator and hits him wit that real talk. She tells him he can’t let the fear of DeVoe coming for his fade take control and leave him cooped up in his room all day, but Ralph won’t hear it. He calls out Iris for her behind-the-keyboard leadership skills (Bast help me, the boy hasn’t seen the truth yet) and leaves her with that orange juice after brushing your teeth, bad taste in your mouth.

Down at the only Central City bank that ever gets robbed, some pompous idiot is using his hotter than lava, S Rank fire powers to rob the joint…but Jet Li’s lil cousin ain’t about to let this dude take it. The boujee British bafoon punches this brave citizen in the face. Then tries to roast him but them powers be gone…Dun dun dun..and so is the robbery stopping man.

Dusty Christian Grey is taken into custody as Cisco and Joe check out the scene. Turns out dude produces some serious heat cuz he melted through 10 inches of reinforced steel. They question the Bummy Bachelor and find out he got his powers from the OG Particle Accelerator explosion and wasn’t on the bus. His usefulness ended before it began, sooo Cisco gets on his 1920s mobster flow and tells the cops to gethimouttaHEEEERRREEE!

After reviewing the tape, Cisco puts the pieces together and thinks the guy who gets decked (who they find out is named Matthew Kim), is the reason the bank robber loses his powers. They gotta ride out to question him so Iris steps up to handle the dirty work herself. Barry confused as hell like, “Uhh I guess I’ll get on my Where’s Waldo and look for a reason to exist.”

Cisco is still deading Harry and his Thinking Cap endeavors, but it does look like progress is being made. Harry correctly predicts some hilarious things about Ralph before the cap goes up in flames mad Home Alone 2 with the flow.

Iris and Joe go down to check Kim, but Iris gets herself yoked up with a knife to her throat so Barry is emergency alerted to suit up. The Scarlett Speedster whips out his newly perfected Flash Time move to disarm Kim but gets Kirby’d in the process. Now his powers belong to Iris and the real fun begins! Matthew Kim runs and they head back to HQ for testing. Everything comes back all good. Kim accidentally swapped the metahuman DNA from Barry to Iris aka Iris has all the Speed Force juice, so Barry implements her into a training regimen and Cisco names Kim, Melting Pot.

Booooyyyy is Iris puttin in that Jackie Joyner-Kersee WORK! Iris looks like a damn natural out there glistening in electric lavender fashion. And she has that look, that feel, that joy that all new speedsters have on their face. It’s a great moment. Theeennn Barry decides to take her Black girl swag away by telling his wife how sad he is now that he’s lost his powers and his job and DeVoe is winning. YO, they really went and upped this marshmallow tempurpedic cotton candy moment by breaking out the harps for this soft ass scene!

Iris looks sooooo fucking dope with her boss purple lightning steaks! Out here looking like Prince in a thunderstorm. Lookin like the Queen of Asgard. Lookin like Kakashi Sensei puttin in that work. Get your hero game on girl! Purple Reign all day baby.

A fire breaks out in some building and the team is all “Uhhhh… Ralph too shook to step outside, so what we gonna do??” Of course, Iris steps up to don Jessie Quick’s eye mask and become The Flash. She zooms down there in all her royal purp glory and saves every civilians with ease. Then gets into her advanced Flash maneuvers when she tries to put the fire out, but only makes it worse. The roof collapses and she is pinned to the ground. She tries to dig into the Jonin level attacks and phase through the debris but needs to be vibed out right before the room collapses, ending her short-lived superhero life. Ralph writes his will.

Realizing the situation with DeVoe and finding all these bus metas is getting dire (and our veteran hero being replaced with a red-shirt freshman), Cisco decides to finally help Harry but threatens immediate breaching if he goes Dr. Moreau. DeVoe made the cap work by neuro-chemical engineering the dark matter from the particle accelerator explosion, so it’s time for the bright minds at S.T.A.R. Labs to re-engineer that experiment and get their own extremely advanced thinker on the team.

Barry is training Iris when she drops some really dope bars on our boy after he suggests that Vibe or Killer Frost should handle the next meta that causes problems. She tells him that ever since Savitar painstakingly paralyzed her with fear, she’s been trying to find the fearlessness she once had in herself.

She was a journalist before leaving Central City Picture News. She was in the thick of explosions, shoot outs and robberies all the time. Then a whole season of stalking and that predicted moment of homicide she was forced to endure did something to her. Now she wants her courage back. She refuses to live behind the communication lines. It’s time for front line Iris. And not a moment too soon, as Caitlin informs the caramel love nesters that the guy who Melting Pot transferred those fiery powers to, has appeared and (no, I’m not kidding) is screaming in the middle of the city for someone to bring him money. I just…I can’t.

Cisco whips out a #PurpleReign worthy costume for our heroine who pulls up to the scene. Joe and his CCPD crew already have guns drawn, ready to let it go! Melting Pot is there trying to diffuse the situation. He’s about to get his ass roasted when Iris saves him before slapping cuffs on him immediately afterward. Then she turns her attention to this new guy who I’m going to call Melting Point because that’s a dope ass name and people can’t seem to get Kim’s name right as Pot or Point. I digress.

Melting Point is busy turning up the heat on our girl, stopping her from getting close enough to drop his ass like Deebo. When he goes full FLAME ON mode, he becomes a thermo cyclone which threatens everyone and everything in the surrounding area. Dude out here looks like a hurricane of embers, Charizard with the fire spin flow. Impressive CGI in this scene. And the team has nary a clue what to do with heat of this level. So they resort to their only option: Harry’s thinking cap. He realizes out of all the possibilities in the world, there is only one solution that will end this hell. Iris has to create a tidal wave and direct it at the vortex of flames. Barry gets on the comms and hits her with that tried and true Flash mantra:

Iris listens to Barry’s advice and digs deep to whip up a massive tidal wave. It stands insanely high when she condenses her path, zigs and zags for the coast, tsunami in tow. Melting Point, the guaranteed-to-get-bodied idiot, is doused and banished to villain of the week purgatory.

After saving the day, Joe got jokes! “Barry ain’t never made no tidal wave! Iris did that!” They bring Melting Pot into the Cortex so he can get Barry’s powers back from Iris, then extend an invitation for him to join Team Flash. After he agrees, Barry requests a training session from his boss and Iris Da Melanin GAWDESS obliges with a 6am report time. It was cute.

Iris just continues to drop the illest bars on cats. Barry tells her that he would not have blamed her for keeping her speed powers, cuz she didn’t have to give em back. So she breaks it down for Barry’s 2% milk behind. Iris tells him that now she knows why being the Flash is the reason her husband wakes up and is what he’s passionate about. It took her getting powers to remember that there are things that do that for her too. This is why her Saved by the Flash blog is getting a revival!

She ends the episode following up on her pep talk with Ralph. She’s surprised to see how quickly he agrees to buddy up with Kim. But we all know it’s hard to keep your shook one stance after seeing someone who never had powers, assume the mantle of a crime fighting legend because she felt it was her duty. Cocoa Butter Kisses for the win 2 weeks in a row!

Watching The Flash? Read all of BNP’s other recaps of the series here