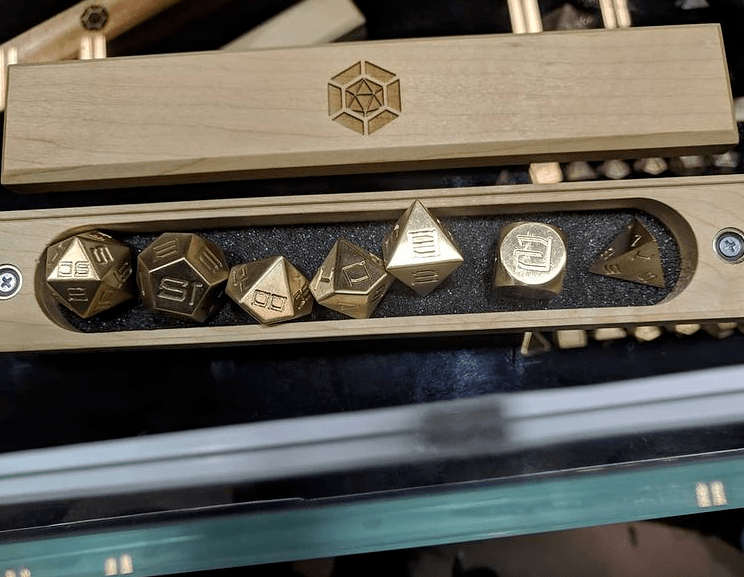 I didn’t play my first TTRPG until I was in undergrad. I fit all of the expected boxes: nerdy, shy, a fondness for numbers, and theatertics. But I never met any other players or would-be dungeon masters in high school. I was fortunate enough to find an accepting one within weeks of  starting school in a new state. The first game I played was in the d20 Modern system.

I played a Bat-Moreau Detective. In hindsight, I was playing my take on Batman. In hindsight, it’s like super obvious, like oh my god, how silly was I that I did not realize I  was playing a literal Bat-Man Detective. Goodness gracious kid, come on. But the point stands, that was my first taste of the game and soon enough, I started playing more and more regularly. I learned that some DMs take Cleric alignments in D&D way too seriously and that other DMs would applaud your audacity and the insinuation that enough ranks in Engineering would allow you to repair an airship.

A World of Adventure

I learned about other TTRPG systems, specifically the Storyteller system, and I got to be a player and a DM. I’ve gotten to play a Goblin Swashbuckler and an improvised Imperial Torture Droid. I’ve gotten to lead teams through a mysterious twenty-sided world, laden with a variety of pop culture references, and I’ve gotten to roll and reroll and reroll more characters than I get to count.

I’ve been playing for twelve-ish years, which is both a long time and no time at all. And this last year has very much highlighted a singular fact: that I am a DM at heart. When someone says “I always wanted to learn to play,” some switch goes off in my head. I feel the cogs turn and have an urge to answer all of the questions.

Thus, this is a primer. This is a starting point. This is a sign post that I hope screams, “You too can lose a significant amount of money buying pretty dice and miniature figures that represent your character.” This is a demystification of TTRPGs that I hope helps.

The genesis of all of this will be an inclination: “I want to try this game with folks.” And as such, the first step is just finding folks and a timeslot that works for everyone. Even for grizzled veterans this is one of the most daunting tasks. Ask the people you want to play with, send out whatever your preferred scheduling mechanism is and, once you have the date and time, take the time to talk things out (GM Errata: Do not skip the 0 session). You could make a Google form, use WhenIsGood, a Doodle, or Calendy. Or if you’re like me, you could make a Discord to facilitate the conversation (and also prebuild a space to meet later).

The case for a Session 0

Every group is going to have different dynamics. Some people play for escapism, some play socially, others play for the drama. Some people play for the weird mechanical interactions that allow you to get away with things that you couldn’t do under a stricter system. And some will have no clue what it is that they want from a game until they start playing. Some groups will only be able to meet for a day, whereas others will end up playing for years on end.

But it’s important for players and game masters to have shared expectations and be willing to work cooperatively. While they are Tabletop Role Playing Games (TTRPGs), it would be equally apt to call them collaborative storytelling experiences. Not every GM and player combination will be a good fit. But, if you take the time and effort, you’ll be surprised what you could come up with. (GM Errata: Please don’t insist that your local GM conform to the standards or style of GMs that you have seen on stream or heard on a podcast. We love feedback, but ground your suggestions in reasonable changes and manageable notes).

The rules, the code, and how much is just guidelines anyway?

With that said and done, this would be the time to look at the rules of whatever system you’re playing. Maybe you’re opting for Dungeons & Dragons since that is the most recognizable brand and one of the longest runnig. Ever since Gary Gygax and Dave Arneson made it back 1974, it has left a lasting cultural impression and currently lives on to this day with its Fifth Edition. Or maybe you’re picking up Kieron Gillen’s Die after reading the phenomenal comic, or delving into the Tales of Xadia because you’re a fan of The Dragon Prince. No matter the system, there are some core tenets to take away.

And that is perfectly okay. If you’ve seen a rulebook they can be weighty tomes with lots of text. Don’t try to memorize everything. Take notes, post-it your books with pages you frequent often. If you’re digitally inclined, try keeping a Systems Reference Document (SRD for short) tab open on your laptop or phone (my personal favorite is http://5e.d20srd.org/ ). And crucially, the rules are more guidelines than actual rules. Your group can modify them on a whim. Your GM may house rule things in for the sake of fun or balance. Much like with any new game with made-up rules, you just need to be willing to learn and teach.

There are intricacies and trial and error, but the joy is in working together, in the experience of bringing a story to life. But as it were, let’s provide some tips, tricks, and tools for both new TTRPG GMs and players alike.

Your first experience will probably be messy and that’s okay. But if you want to try your hand at rolling the proverbial or literal dice, take the initiative.

Yes, that’s a D&D joke. What did you expect?