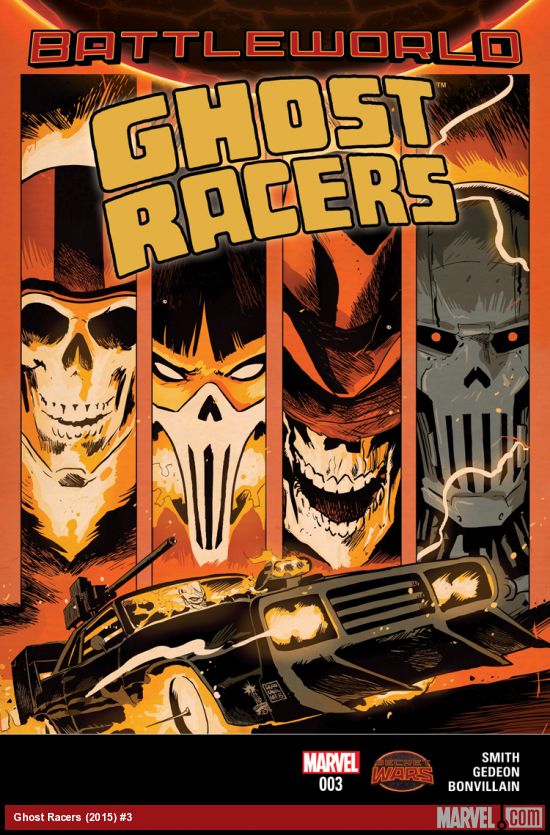 I mentioned in my Planet Hulk review that the best thing about the Secret Wars tie-ins is the sheer wackiness of a lot of them. Heroes and villains being thrown into this alphabet soup of extreme situations thanks to God Doom has been a fun delight for readers so far. The one series I’ve read that seems the most like an old grindhouse film is probably Ghost Racers. Death Race meets Ghost Rider? How could that get any better?

When we catch up with Robbie Reyes, his igniter spirit, Eli, has finally broken the two of them out of the Killiseum, away from the clutches of Arcade and Zadkiel. However, the flight from his fellow Ghost Riders still rages on. Meanwhile, Arcade has other plans for our champion that hit a little too close to home. This still stands strong as one of the best titles of the Battleworld line just due to its total ridiculousness. Felipe Smith never hesitates to get crazy with the action (which isn’t quite as furious as we would have liked, considering the last two issues) and always shows a certain reverence for his own creation, Reyes, in a way that makes us not mind his obvious favoritism over the other established Riders.

And we’re also left with a cliffhanger ending that looks to be very promising. The artwork from Juan Gedeon has been consistently strong. His main attraction has been his dynamic, eye catching designs for the various Ghost Riders. The only complaint would be that there are a couple panels feel a little claustrophobic with not enough room for the Riders to stand out given the overall color palette. But the aesthetic of the book is still mostly strong.

Bottom Line: Not quite as turned up as the last issue but a solid book.