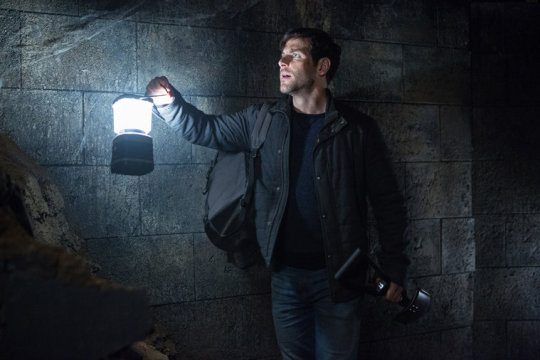 It’s the 100th episode and the second half of a cliffhanger so you know things are about to get interesting all over.

When we start, Nick and Monroe have fallen through the forest into the catacombs of a defunct and disappeared church.

Renard is onstage holding Mayoral candidate Andrew Dixon, who has just been shot by a Black Claw operative. Hank and Wu, who were on site in the crowd looking for the operative, spot him on the balcony of an adjacent highrise and shut down the building. BUT Eve, straight out HW, is there, too. And we all know how she feels about police procedures.

Hank and Wu bust into the apartment and find the owner’s corpse, but no sniper. He is on the roof. When Hank arrives on the roof, it’s empty. Because by on the roof, I mean he woged and is using his Wesen bird-like power to scale the wall.

But Eve is watching – just a few feet away from where paramedics are trying to revive Dixon. She follows the sniper.

Nick and Monroe are still in the catacombs and finding nothing. When they don’t find the buried treasure, they realize that 1) it might not be buried and 2) they’re in  catacombs. Plan B is to look behind the skeletons. Because 800 years ago what would have been a better theft deterrent for the superstitious than decaying corpses.

Adalind is at the Spice Shop with Rosalee. They are both doing their best “don’t think about my bae dying in the Black forest of Germany while looking for secret guarded treasure that Black Claw is willing to kill for” small talk. And, of course, failing. After searching the skeletons and finding nothing but more skeletons, Nick and Monroe try to think like the people who hid the treasure. Surrounded by death, fear, and superstition, they guessed that no body would come down to the catacombs without light so maybe… hmmm. They turn off their lights and…

…7 glow-in-the-dark skulls spelling out the letter G and facing inward! Moving a few skulls reveals a shield with an X. Oh shit! It’s the spot.

So, as I’m watching I keep wondering where the priest, the mouse, and the two henchmen who were looking to kill Nick and Monroe are.

Back in Portland, Eve is still following Marwan when he calls to check in with Lucien. She uses her Hexenbiest magic to send a cyclist speeding towards him. Once Marwan is on the ground, she’s the concerned citizen. She tells the cyclist to call 911. Then she steals Marwan’s phone and breathes some Hexenbiest fog into his mouth. Welp, that can’t be good for him. When Nick and Monroe remove the shield they find a box with 7 locks. Monroe (history) nerds out over the whole first people in 800 years to see what’s in the box thing. Which is to say he forgot for a minute that they only have 5 keys. Sooooo, they decide to take the chest back to Portland. Except they are still trapped in the catacombs, so now they need to find another way out. So [she types as she shakes her head], they decide to split up. I… I don’t… why would… that doesn’t…

Monroe stumbles across some really ornately dressed corpses (that seems important) just as Nick yells (did I mention the people in the forest looking to kill them?) that he found the way out. So he starts digging.

Back at the Spice Shop, Rosalee gets the call that Andrew Dixon was killed. She’s a little weirded out, but okay. Until a customer rings the bell on the desk and she sees that that customer is Tony, as in Tony whose personal motto “I write creepy letters.” She’s quick to shut that down. But Tony won’t get off the “You owe me” horse. He says she needs to give him $5,000 and starts breaking stuff. And then he hits Rosalee.

Why isn’t Rosalee woging? I’m pissed… until Adalind comes out from the back like “Imma call the cops” and dude woges into a Kackenkopf, a bug-like wesen. He comes for Adalind ready to hit her too. Right up until his hand stops mid-air and his fingers start breaking, backwards. Okay, Adalind, I see you. And the ripple of Hexenbiest that ran over your face. After Tony runs out of the store, Adalind is inconsolable. Her first thought is Nick: what will he do if he finds out? What will happen to her and Kelly?

She extracts a promise from Rosalee to not tell Nick. Rosalee agrees but is like, “Um you sure you want him to find out by seeing this? Because um maybe you use your words in this situation.” Adalind is all tears and “you have no idea what being a hexenbiest does to you.” Rosalee does what she can; she goes to look for a way to boost the suppressant. Nick and Monroe make their way out of the catacombs only to see a bunch of lights in the distance moving towards them. Monroe, bless his optimistic heart, thinks it might be a search party for a lost person until the gravity of their situation kicks in. Then they hide. They see the priest walk by and realize that the church mouse must have told him about the Grimm (Nick) and now they’re being hunted. The priest stumbles onto the entrance (hole in the ground) to the catacombs and seems to have an idea of what he’s found so he calls to all his henchman. Nick and Monroe hear this and are glad to have their would-be killers distracted. They run into a Wesen who woges and bites Monroe and gets away. They make it to their car but it’s surrounded by henchmen so Monroe woges and in German tells them that the priest and the others need their help. The guards run away. Monroe and Nick flatten one tire on every car to slow them down and then bravely run away.

Back at the station, Hank and Wu report the situation to Renard. Sadly the situation is that they know Marwan did it, but can’t explain how they know that or how he got away. Then the Feds show up. Renard, still covered in a thin coat of Dixon’s blood, tells them to let the Feds handle it.

Eve returns to HW with Marwan’s phone. The plan is to clone it and return it to Marwan so they can get info from it when he makes contact with Black Claw. At the Spice Shop, both Adalind and Rosalee are still shaken up. Rosalee tries to explain who Tony was: a snapshot from a low point in her life. Monroe calls to tell her that he and Nick are headed back to Portland and that the trip wasn’t a waste. Nick talks to Adalind and it is a picture of awkward; they just had sex and she’s hexenbiesting.

Back at his poorly lit lair, Lucien gets a call from Marwan. And HW tracks it.

When he got the call, Lucien was looking at a picture of Renard. Hmmm. After he tells Marwan he’ll pick him up in 20 minutes, Lucien calls Renard and tells him that the man who killed Dixon is at the hospital, but won’t be for much longer. Hank and Wu are with him and all three head to the hospital to intercept Marwan.

Hank approaches him first, so Marwan runs. Directly into Wu’s cruisier. So he turns and runs again. Directly into Renard. Marwan woges. Renard woges. And now it’s like wesen WWE. Right up until Renard kills him.

HW is at their headquarters tracking Marwan’s movements so they are concerned when he stops moving. Meisner is pissed. At that exact moment, Hank is convincing Renard that the whole situation was a setup. Marwan had dyed his hair and looked nothing like the picture that was put out with the APB. So who tipped them off?

Back at his office, Renard is watching and re-watching the footage of Dixon die. And then he sees it: Rachel Wood onstage on her phone looking up at the balcony where the shooter was BEFORE the shot was fired.

So obviously Renard is upset. As he’s walking to his car, Meisner appears out of the shadows to give him a hard time about killing Marwan. Renard is like “Welp, if you had told me what was going on maybe I wouldn’t have accidentally shat on your plan.” He has a point. But, Meisner basically repeats what Hank said to Renard earlier: “Who could have possibly known that Marwan was in the hospital except for someone setting you up?” Welp, he has a point, too.

When Renard gets to his house, Rachel Wood is there on some “I need you tonight” bullshit. Renard invites her in and then woges when he asks her what the hell is going on. She woges, too (Löwen). Oh my. She says she’s with the people who are going to change his life.

Then Lucien shows up offering power. And showing him a “Renard for Mayor” poster. Decisions, decisions.

At the loft, Adalind is accidentally making water boil. Oops. Nick and Monroe show up at the Spice Shop. They call Hank and Wu. Monroe’s arm is still hurt and seems to be getting worse. He doesn’t care; he is only concerned with opening the chest. They pick the two locks and use the keys on the other 5. And… it doesn’t open.

Since Nick has that magical Grimm blood, he cuts himself and rubs his blood on the chest. And poof, it works.

Inside the box is a… stick.

It’s wrapped in a cloth with faded words. They’re in the middle of trying to read them when Monroe starts to pass out from the blood poisoning. They are all aflutter getting him up and out to a hospital. But then, then Nick accidentally touches his arm with the mild-mannered 800-year-old stick and his arm starts to heal.

So many questions: Will Renard use the Obama knockoff poster to run for mayor? What happens when Adalind gets her powers back? How awkward will that Grimmenbiest sex be? Where’s Tony? Where’s Trubel?