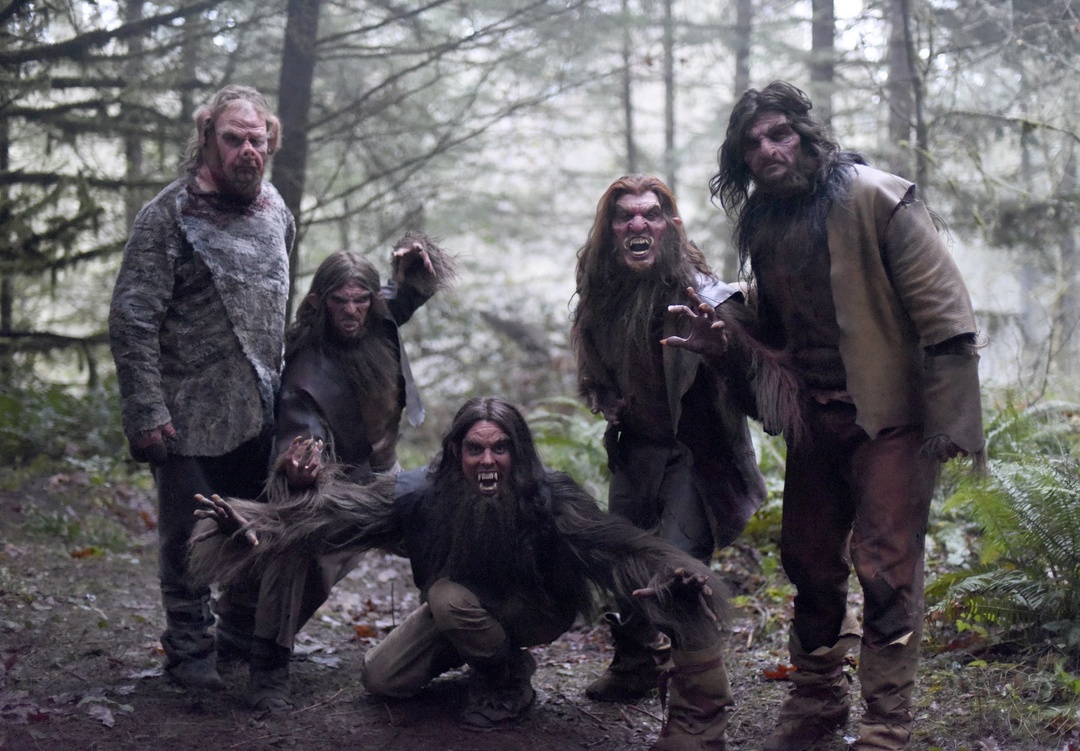 This episode picks up right after Eve’s moment of intense stupidity—y’know when she decided to use a spell from Adalind’s mom’s spellbooks to go through the mirror to “the other place” without talking it over with anyone or leaving a note or anything.

Nick comes into the loft (from doing cop shit I guess) late. It’s dark and he thinks everyone is asleep… nah, that’s not how this works. Adalind is up and waiting for him; she wants to know if he talked to Renard. He gives her the rundown: they talked but neither of them came up off any information. She’s worried about Diana. Which is to say that Adalind FINALLY told Nick that he’s sleeping 20 feet from a stone cold killer; she tells him how Diana controlled Renard’s body so it was actually her who killed Bonaparte (and Rachel Woods). Nick got that shook “at least the adoption ain’t finalized” look on his face, immediately followed by that “welp, we all killers in here so” [shrug] look.

Meanwhile at Rosalee and Monroe’s house, they come in to find the mirror they so meticulously covered earlier (in the last episode). Yep, it doesn’t tae them long to figure out that Eve did some dumb maverick stuff. Clues: blood on the mirror’s frame, a dagger, and an open book of spells. They call Nick who brings the whole family over because only a hexenbiest (hi Adalind!) can open a hexenbiest’s book of spells. 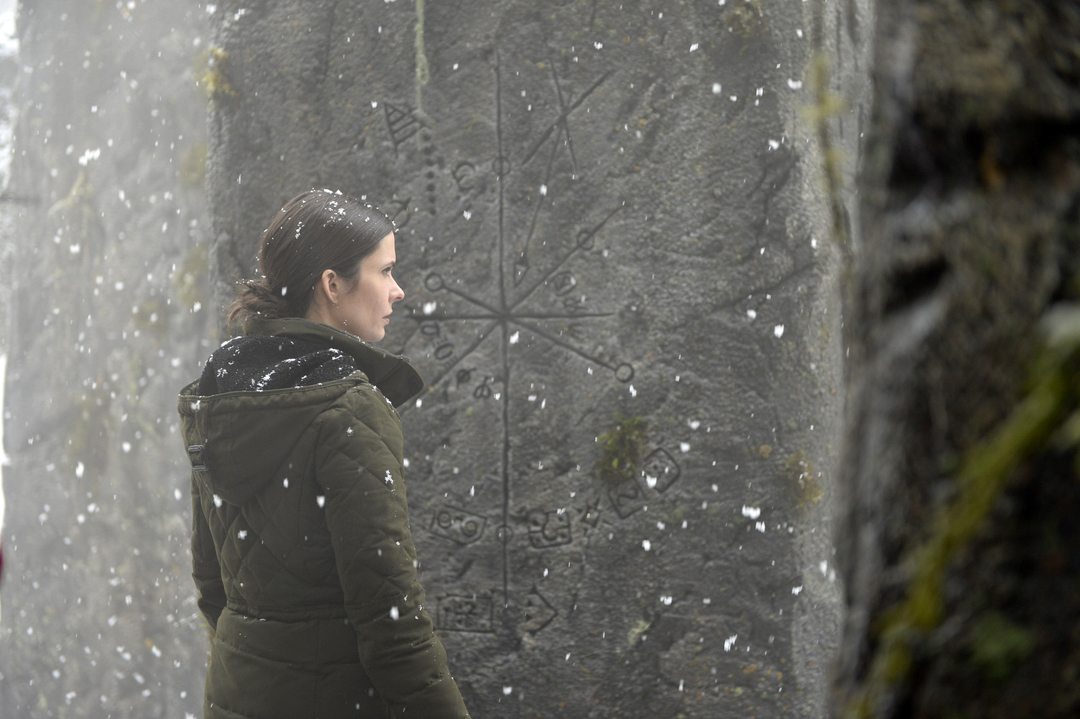 In the land of bad choices, Eve wakes up in a snowy forest. She can see Monroe and Rosalee talking, but they can’t hear or see her. And eventually they disappear and Eve realizes that she’s been looking through a boulder, a boulder with all of the symbol from the tunnel carved into it. She has no idea what to do or where to go, so when she hears growling and screaming she decides that’s where she should be. She rolls up just in time to see a fight and death and gore between several Wesenfolk. She’s hiding at the edge of the wood so they don’t see her.

Now everyone is debating what the best course of action is best. Adalind woges in front of Diana for the first time; Diana is, of course, unphased. Adalind volunteers to go after Eve because she is full of hexenbiest blood which is evidently like Easy Pass in these Portland streets. Everyone just looks at her, looks at her kids, looks at her, …

Nick is in full hero mode on some “there has got to be a way.” He pulls out his magic stick because why not? Diana’s eyes go creepy purple and she says that the stick is special. That explains why Nick tapped it to the mirror and was able to go through. Unfortunately though, the stick wasn’t able to go through so Nick is in the “other place” looking for Eve with no way to get back. Sounds like a well thought out plan.

So now, Nick is doing his Robert Frost impersonation (once upon a snowy evening) in the woods. Just like Eve, he can see Monroe, Rosalee, Adalind, and Diana. That’s how he realizes that he doesn’t have the stick anymore. And then the mirror disappears and is replaced by the boulder.

He, too, hears a violent struggle in the woods and decides the investigate. He sees bauerschwein get killed (and it doesn’t unwoge at death like in Portland). The Wesen that killed the bauerschwein attacks him. He fights for a while, but then decides to shoot him because… efficiency.

Eve hears the shot and comes running to him. They argue: you shouldn’t have come; you shouldn’t have come either. Why. Why not. It’s all very standard and for real, just kiss and get it over with. Because they have no idea where they are or where to go, they decide to follow a path that Eve found. They figure it’s best to keep moving with so many Wesen around. They are hauling ass when they hear a pack of blutbauten howling—grieving over their fallen comrade.

Back in Portaland, Adalind puts Diana to bed so that she, Monroe, and Rosalee can argue about what to do. Adalind brings up Renard. One thing leads to another and Renard ends up at the loft.

In the other place, Eve and Nick are trying to make sense of their surroundings. Eve tells Nick that she saw a man and even though she watched him be killed by Wesen, that means there are probably other humans in this place. It seems like the tentative plan s to try to find them, but then Eve’s hands seem to start woging without her meaning to. Evidently that’s what being in this place does to Wesen. There’s no time to worry about that because Nick hears the pack of Blutbauten coming and they haul ass. 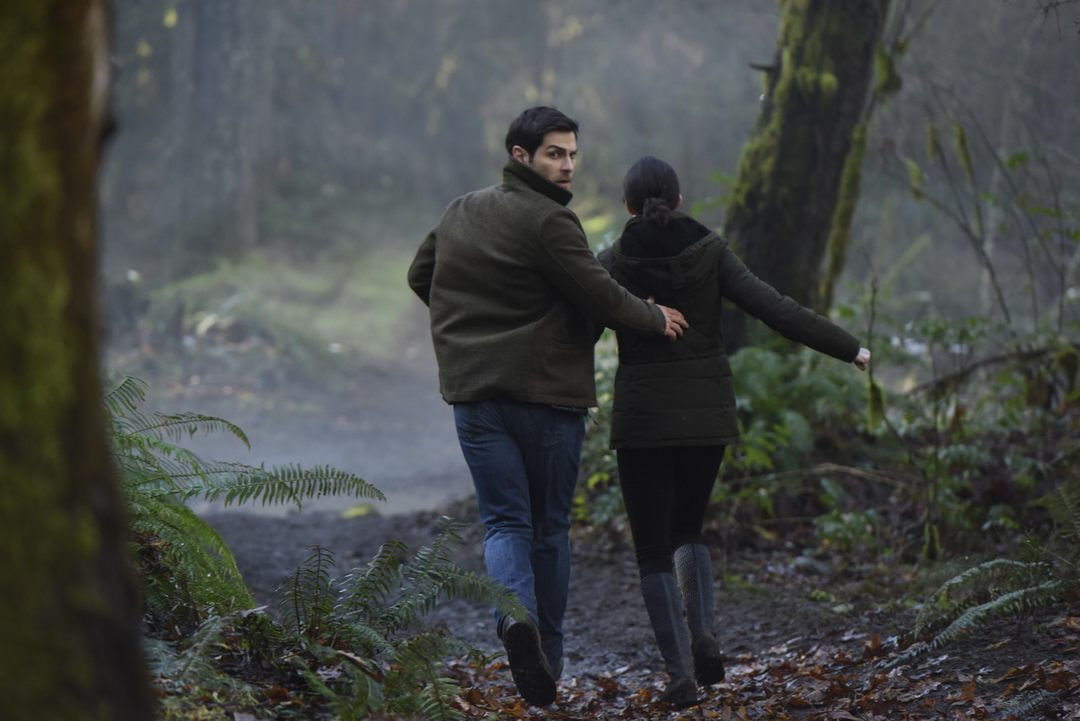 At the loft, the gang is all there (including Hank and Wu) to greet Renard when he shows up. If the soundtrack is to be trusted, Renard is still evil. But Diana (who is also evil if you ask me) comes out of her room and hugs her daddy right before he gets the grand tour of the tunnel—which includes Monroe telling him about the cloth and the five keys they found and their trip to the Black Forest. I cringed through all of that because I just don’t trust this dude. His abs? Yes, like Shakira’s hips they don’t lie. But the rest of him? Nope.

And that’s when Diana decides to make all the writing in the tunnel glow purple like her creepy ass eyes. Adalind is like “so about our daughter and her obvious connection to all this? Let’s cut the bullshit.” 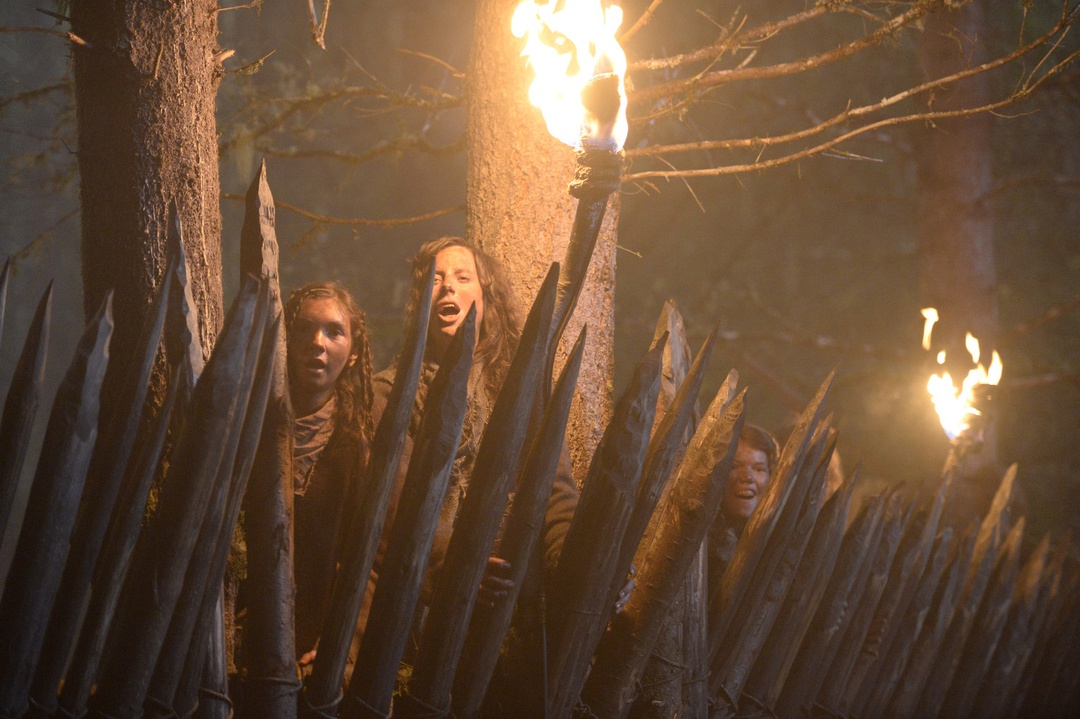 Nick and Eve are running through the darkness followed closely by the blutbauten when they see a small village of human. But the humans do not roll out the welcome mat. Nope, they are like “close the gates!” Trapped between their spiked fence and the blutbauten, Nick shoots a few of the Wesen. Afterward, the humans come out skeptical AF. But once they realize that the Wesen are dead, they invite Nick and Eve in. 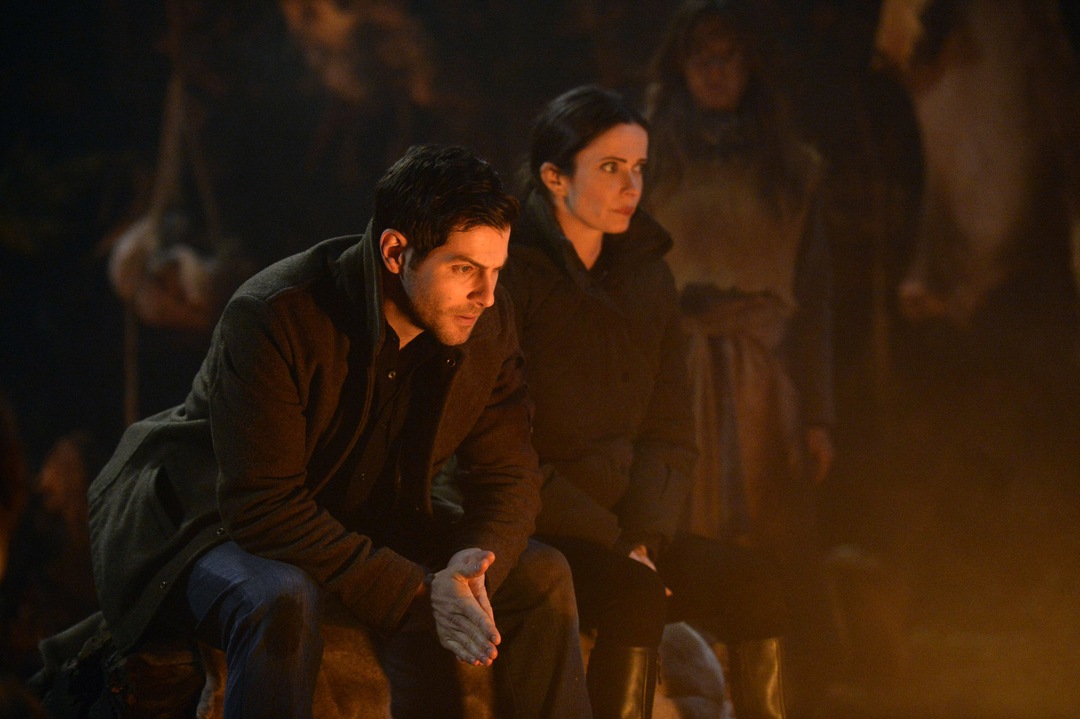 Meanwhile, the blutbauten that Nick didn’t kill runs away to tell his friends presumably. Nick and Eve are sitting around the fire eating roasted blutbauten with their new human friends. Since Nick seems to have failed German 101 in junior high, communication is slow. He draws a picture of skeletor and the whole village is shook. They point them towards the Black Forest. They think Nick can kill skeletor with his gun and send the two of them out into the pitch black night with one of their own as a tour guide.

At the loft, everyone is gathered around the table where they are showing Renard the cloth and the stick. Ant the stick, though? The stick, though?! Ugh. He seems unimpressed until Wu tells him that it can heal.

The blutbauten that Nick didn’t kill finally arrives at his destination, but he isn’t surrounded by friends and family. Instead, skeletor rolls up on him. 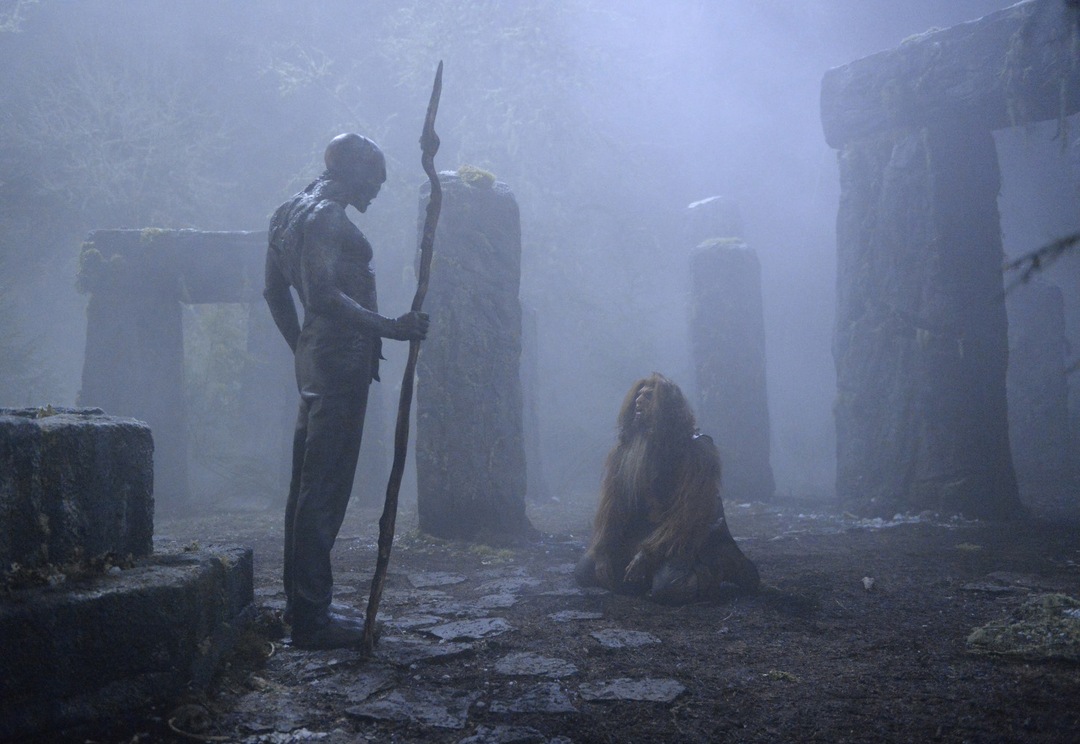 Nick and Eve and the tour guide arrive at a spot and their tour guide is like “it’s been fun, but nope.” I think his exact words were “no walking meat comes out alive.” Then he sees Eve’s hands that have been slow-rolling woging against her wishes this whole time and he runs away.

Renard contacts his friend in Siberia just like in the olden times, via Skype. She asks Diana about the other place. Somehow they end up on Schrödinger’s cat and the idea that their world are two possibilities and as long as the “box” stays closed, both can exist simultaneously, but if the box is open by—I don’t know, let’s say—Eve and Nick going to the other place then possibilities start to collapse in on each other. When Rosalee tells Renard’s Siberian friend that Skeletor tried to pull Eve in through the mirror, she’s like, “so Renard let’s speak in Russian because… um … let’s just speak in Russian.”

Then she says that Skeletor might be what/who we call the devil and that Diana might be the Shaphat. Then she starts quoting prophecies. Meanwhile, the gang is mad silent because if I was there and you just switch to Russian mid-world collapsing conversation…? No, ma’am. What we not gonna do is act like you have anything to say that I shouldn’t be hearing right now.

But they keep speaking in Russian. Turns out that according to the prophecies, Diana might be the Shaphat which means that Skeletor would want to make her his bride and have a hundred babies with her. She ends the conversation with “prepare for the worst.” Welp.

In the other place,Nick and Eve return to where they came through: a series of boulder stones in a stonehenge-esque pattern that culminates in a stone altar. Then the blutbad that Nick didn’t kill attacks Eve, so Nick uses his gun to kill it. They figure out that it told Skeletr that they were there. So that sucks.

At the loft, Renard and Adalind put Diana to bed. Then Renard tells the whole crew about the Shaphat and the child bride angle. They are not having it; they all split up to go get more books: spellbooks, Grimm books, anything that might help.

In the other place, Nick has three bullets left and it’s night time. Eve wants to check the paremeter of the Stonehenge, but Nick doesn’t want to hear it. He doesn’t want to split up and she’s on a suicide mission so she doesn’t care what happens as long as skeletor dies. Nick wants to protect her; he still feels guilty about everything that happened to Juliette/Eve. But Eve says that she’s not sorry she met him even if she is sorry about all the horrible things Juliette did when she first got her powers; yes, she is speaking about Juliette as if she’s a different person entirely. Juliette is gone, she says.

None of us are who we used to be, Nick says. He ain’t never lied.

Eve tries her best to release Nick from his guilt and for a moment it looks like they’re going to kiss. Everything that ever happened between them brought them to this moment, she says. Because, she thinks, they were meant to kill Skeltor together.

Just then, Skeletor shows up. He knows Nick is a Grimm, Nick wastes all there bullets shooting, but not hurting, him. And dude raises his staff, it glows green, and Eve starts woging.

Things could be going better.

I have questions: Are we supposed to believe that Renard is “good” again? What are they hoping to find in those books? Are we sure it’s not Eve who Skeletor wants to bring in the reign of destruction? I mean, her name is Eve. Is Kelly ever going to be a useful character? Ever?