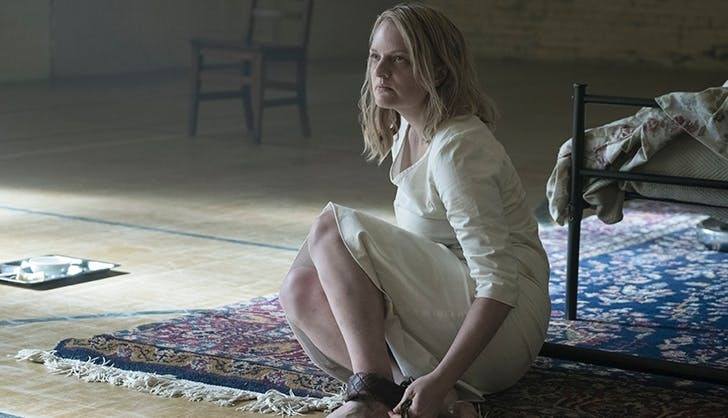 Deliver Us Unto Evil

The episode starts where we assumed it would. June was caught and taken back to Gilead. They snap a new tracker tag on her ear and then chain her to a bed at the Red Center. June still tough as nails, walking as far as that chain will take her and looking Aunt Lydia deadass in her face with some “June. My name is June.” Aunt Lydia don’t care. She is delivering lecture on top of lecture on top of what she would refer to as grace.

“June will be chained in this room until she gives birth. And then June will be executed. Offred has an opportunity.” — Aunt Lydia

Well, shit… With an offer like that, I really don’t judge June for giving up the flowered bedspread Serena and Commander Waterford. June takes the red dress of the handmaids with a smirk on her face. She may be going, but she doesn’t seem to be giving in to the b.s.

When June/Offred returns, the welcome party is as stern and aggressive as before. Serena can’t wait for the opportunity to greet June with a hand around her neck once June goes to her room. June still ain’t budging, tho. My girl didn’t flinch when Serena grabbed her by the neck. She donned that same smirk she gave Aunt Lydia, looked Serena deadass in the face and said: “Remember, as long as my baby is safe, your baby is safe.” Serena is mad AF and I’m over here like…

Of all the precious gifts in life, I can tell you this ain’t it. Aunt Lydia making June guzzle the nastiest looking green smoothie, only for it to end up spewed across the table. The other mistresses arrive with gifts and their handmaid’s in tow while Offred/June is sitting in a rocking chair off to the side of the room. This has to be one of the tensest scenes this season. The mistresses are offering good wishes and talking about their handmaid experiences when June strikes while the iron is hot… “I felt the baby kick last night.” This was some smug and amazingly petty shit. Serena is all in her feelings and June dropped a bomb like she hadn’t been gone for 3 months. That dagger went straight through the heart.

Aunt Lydia does her thing to break tension and it looks like everyone is on a break. June is sitting on the stairs as the other handmaid’s pass her, only to learn that Ofglen isn’t speaking to her. She isn’t speaking to June because she can’t. They cut her tongue out while June was away. This revelation triggers guilt, which triggers a flashback and we begin to learn how shit went down between June and Luke back in the day. They’d had an affair while he was married. His wife tried to reason with June and June shrugged it off…. It was nothing to her. Just an action of passion and the wife needed to get over it and move on. Seems that June/Offred is learning for Alma and the other handmaid’s how her passionate actions have consequences that not only affect her but the community. Mayday is ceased helping handmaids, so no one is being freed.

After the break, there is a ceremony with all of the mistresses and handmaids. June/Offred is symbolically joined together with Serena using a woven yarn of red and blue, tied with a celtic knot. Serena and the mistresses call forth the blessings of a child through chant while every one of them is symbolically attached to their handmaid by these ropes. The handmaid’s are chanting, too. All but Ofglen and June/Offred.

Aunt Lydia, June’s self-appointed herder/keeper, is all about putting these women in their places. She takes a cigarette from Serena’s hand and tells her to choke back her envy. Aunt Lydia takes June/Offred on a “nature walk” to relieve some stress after June speaks about her own baby shower pre-Gilead and it sends Serene to strike Rita (who has already let June know she’s been taking her beating since she left) across the face and damn near into the next room. This nature walk, tho? This is where Aunt Lydia gives Offred one last chance to stay and June one last chance to go. She takes June/Offred to the hanging wall and shows her Omar’s body. Omar is the Econman who tried to help save her and took her back to his home. His wife is now a handmaid and their child is now with a new family. June/Offred loses it. She flashes back to a scene where she is holding her daughter Hannah in a coffee shop as Luke’s ex-wife looks on. Aunt Lydia is whispering sweet “June gotta go’s” in her ear while telling her this is all June’s fault. June didn’t give Omar and his family a choice to live. June takes and takes and is selfish, but Offred is different. Offred can be saved…. 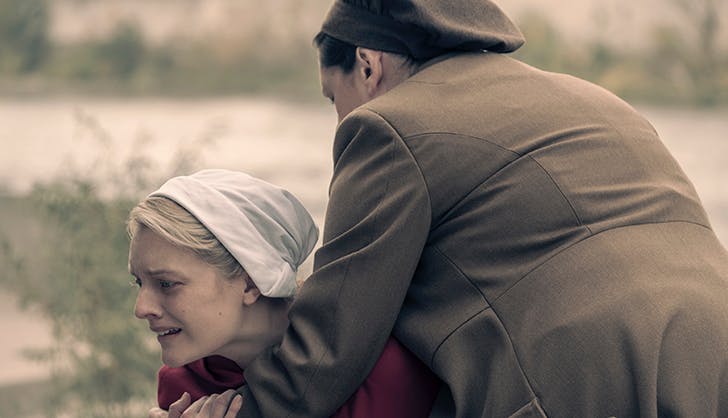 After this walk, Offred goes back with Aunt Lydia and begs for a place back in the Commander’s home. She is on her knees literally begging and whimpering while Lydia, Serena, the Commander, Rita and Nick look on. After an ‘okay’ from Serena, Offred is off to bed chanting to herself. Serena comes in that evening and holds Offred’s belly, singing to the baby. The next day, Offred puts on her red dress and hood, stands outside the quarters and awaits a handmaid for the daily walk. She’s chanting about the weather. June is gone. The other woman, Offred is here to stay.

Catch new episodes of The Handmaid’s Tale Wednesdays on Hulu.