I’m not even going to ease y’all into this glowing recommendation. I’m getting straight to the run down so we can get straight to the bars. You may be familiar with Hasan Minhaj from the comedy scene, as a Daily Show correspondent, smackin’ the shit out of the Press at the 2016 Nerd Prom / White House Correspondents’ Association dinner, then hosting the WHCA in 2017, thereby following up the initial smack by bringing it right back around with the backhand this time around. Now, if you still don’t know Hasan Minhaj, you best get familiar and there’s no better way to do so then with his Netflix comedy special Homecoming King.

Homecoming King is straight art, man. I just have to start with that first. I love comedy, all aspects of it. Now if you throw in elements of tragedy (Christopher Titus), political satire (Chris Rock), Brown / Black / POC Struggle (insert your fave)? Boooooi, don’t you threaten me with a good time, now. Minhaj takes all these elements in the kitchen, puts’em in that pyrex, and stars whipping that [comedic] crack for the masses. I’m not going to spoil the really real shit that gets thrown in that Minhaj hits you with about growing up a Brown muslim in Davis, California.

Nah, you gotta see this shit for that real. What I will say, is that a large base of his comedy centers on his father and mother moving to america as immigrants, his mother having to go back to their home country to finish med school, a few surprises along the way from that [won’t spoil it], and growing up as the son of a Brown immigrant. There’s a segment in the stand up where he talks about how immigrant parents love to keep secret from their children that they spring on them later as well as not being told much about his father’s life when growing up.

Bruh, hearing that made me flash back to my sibling’s father from my mother’s first marriage, he is an immigrant from India. Couple months ago, I was riding with him and I asked how he learned to drive, which lead to a story about his father teaching him, and we got into how his father worked for the government, was cool with everyone, didn’t fuck with the caste system, was pro India, and just a cool ass hands on guy. I told my sister and brother about this conversation in passing later on, and they looked at me in bewilderment and confusion with a tint of “you sonuva—‘” type envy. “He… never told us much of him.” my sister said. I’m like, “Did y’all ever ask?” My brother commented, “Yes.– I think he kept it to himself to add that air of mystery about him, so the fear was still fresh for us. You can’t let the kids know too much about you, then you lose that fear. That’s leverage.”

There’s a lot of jokes that center around being the child of immigrant jokes that some may not relate to but they’re still bars. Minhaj highlights those Brown / POC struggles and even if you don’t apply to you, them shits are still funny from the outside looking in. Plus, if you’re Black / POC they may parallel with certain talks or instance from your own life experiences growing up. Minhaj hits on generational gaps, and progresses through his set from his adolescent years with his father, then his family and then to his adult years with his career. Perspective also plays a huge part in Minhaj’s special. We get to see him get perspectives flip on his come up, revenge, and the Brown / Black / POC struggle of always having to be the bigger person.

Now, let’s talking about the performance of this shit right quick. What makes Homecoming King stand out is Minhaj’s movement through out the special. You can tell this shit, is built like a one man show (found out later it was an off Broadway play) but it moves like a story should move. As someone recounting their life, experiences, and moments that defined them with a friend. It’s this step away from the back and forth pacing with the wired or wireless microphone that has Homecoming King feel as if it is a Ted Talk.

Given the visual aide accompanying Minhaj for certain jokes to add specificity, the similarities are blaring. Let me tell you how hard I’m fucking with that. We’ve seen more comedians using visual aides (Aziz Ansari, Kevin Hart), Hasan’s usage is so interactive and doesn’t exaggerate his stories but nails his obscure references or recountings of the narrative to finite points such as Facebook, commercials, or AOL Instant Messenger.

When he busted out the AIM throwback man? I’m like this is it. This is peak nerdom and aside from the visual aides, Minhaj is so animated. His set is very interactive so you’ll see him nail a point, then round around the set jumping off shit, and it’s so natural and in the moment you can tell that’s his genuine feel. There’s a segment where he pulls up a stool on top of the set’s platform that even if rehearsed, just looks and feels so natural as you watch. 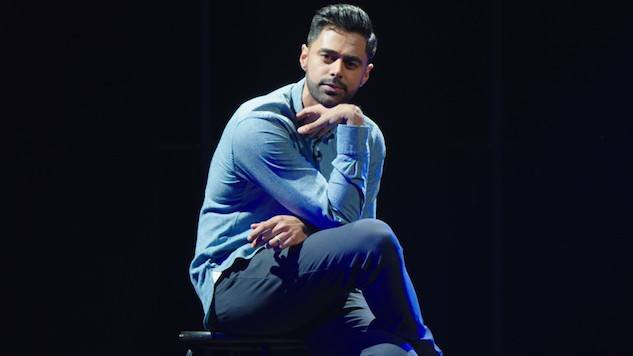 Watching Hasan Minhaj move in his element reminds me of a friend’s compliment. Caroline Rothstein told me once, “You use the stage like an instrument.” For a performer, that’s gotta be the bar, right? Lemme tell you the fuck something, Hasan Minhaj proved that there’s a bar above that, that bar is being able to use the stage as a weapon. Hasan Minhaj is a fucking assassin with the stage. No wasted or forced movements, or hand gestures, Minhaj even cuts these crucial camera angles for us at home as soon as he starts to get deadass on a matter. It’s marksman level plotting while still being natural in your element.

Listen, Homecoming King is a coming of age story you can watch on repeat years later down the line. So don’t talk to me about comedy in 2017 or beyond unless we talking about Ali Wong’s Baby Cobra and Hasan Minhaj’s Homecoming King. I already put Wong in my Millennial Kings of Comedy off that special and Hasan Minhaj just became an unlocked character in that line up as well. I’m not hearing other wise, you don’t come out here on Netflix with a comedy special that’s part Ted Talk, part off-broadway play, part memoir, part nerd bars, and not change the game for the better.