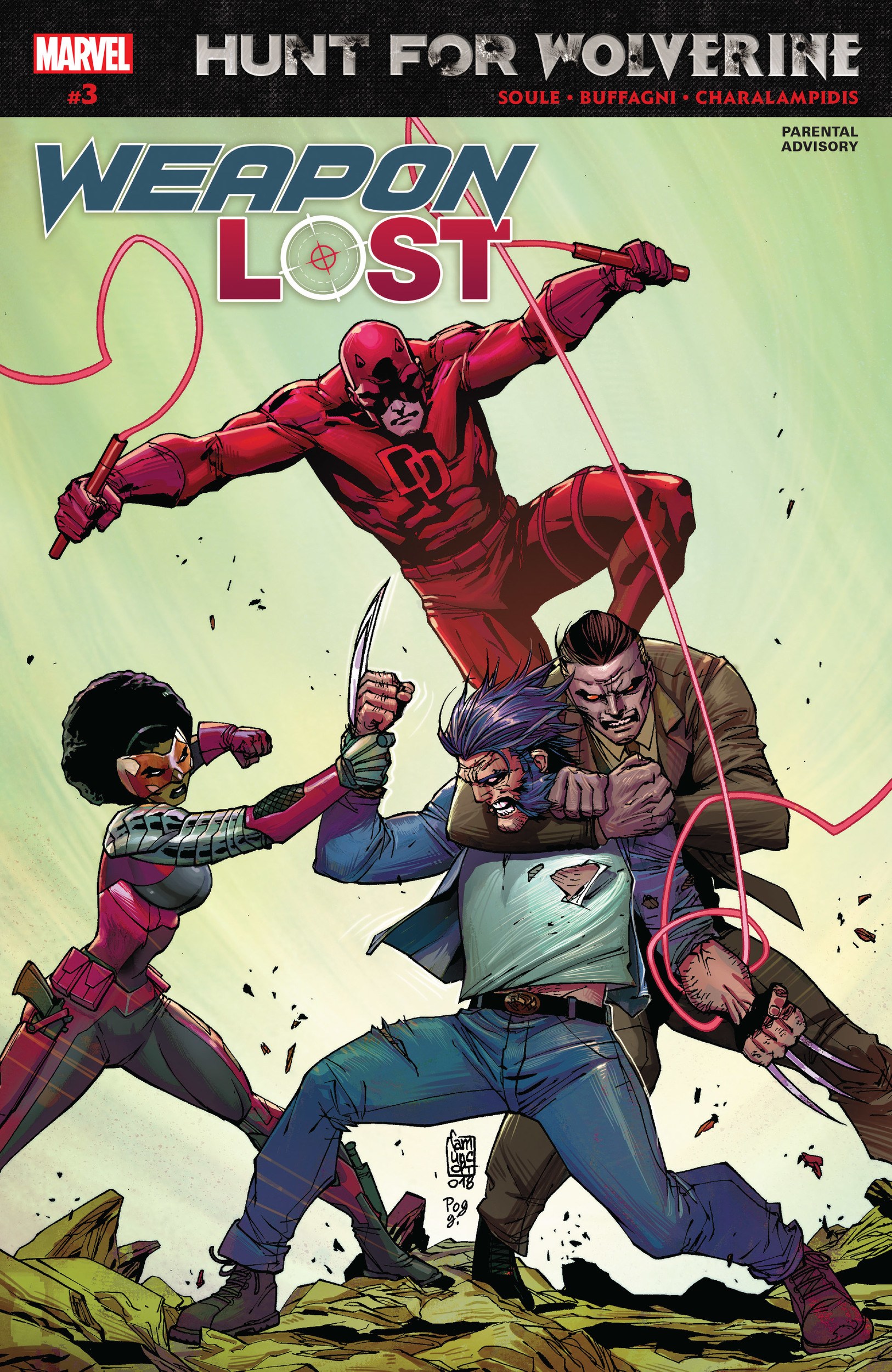 The life (and resurrection) of St. James Howlett (aka Wolverine, Logan, Weapon X, Patch, Black Dragon, Emilio Garra, John Logan, Captain Canada, etc) has taught us many things. The cornerstone of the lessons from his long life, however, is to protect your DNA at all costs. You never when one of those stray clones is going to show up again to kill you, or loved ones. In Weapon Lost #3 of the Hunt for Wolverine multi-series event, Daredevil and his squad find a Wolverine, but definitely not the one they intended.

When the previous issue ended, Cypher was found bleeding out from three claw entry woulds into his chest. Just as Frank McGhee and Misty Knight manage to move Cypher, Daredevil realizes too late they were set up in a trap.  Albert, a clone of Wolverine created by the Reavers using organic and cybernetic parts, reveals himself as the attacker. Daredevil engages Albert for as long as he can, knowing that the cyborg could be even more deadly than Wolverine himself. 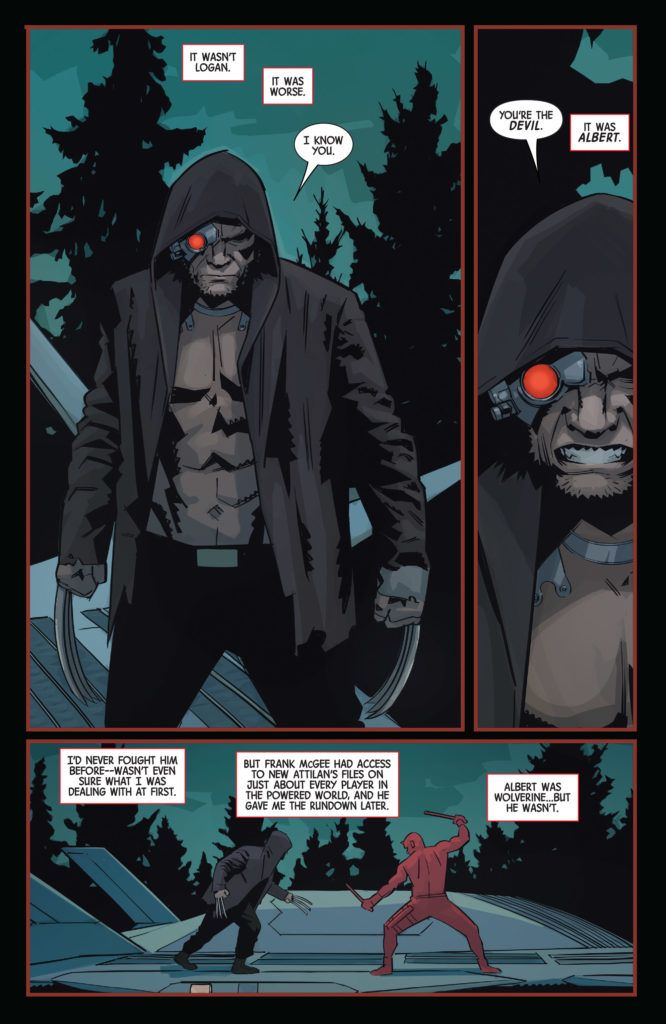 Using his enhanced senses, Daredevil pinpoints a weak spot in Albert’s body. The clone goes down with some team work, and due vengeance from Cypher. As their biggest liability and great asset, Cypher redeems himself even more by doing some investigations of his own with a smartphone he stole from a murdered ranger (you know, typical internet junkie behavior). He discovers that the Chicago police officer who Misty initially interviewed has suddenly disappeared, along with his social media accounts.  When they arrive in Chicago, however, they are just in time for another trap: a bomb.

The Heart of Misty

People bond in times of distress, isolation, and transition. Inhumans, mutants, and cybernetically enhanced former detectives are no different. Before joining Daredevil’s crew, Misty Knight was last seen beating down vampires in Brooklyn and rekindling a romance with Sam Wilson / Falcon. Fluid as Marvel continuity is, though, let us assume the “Weapon Lost” series takes place after the completion of Rodney Barnes’ Falcon run. Knight has been a drifting, solo figure in the MCU for some time now, even more now that she’s quit the police force.  Although Daredevil headhunted her for his team, former cop Frank McGhee made the personal and professional connection that convinced her to join.  It was that same connection that led them to seek one another’s comfort during their downtime. Will this new thread play out more when the series ends? 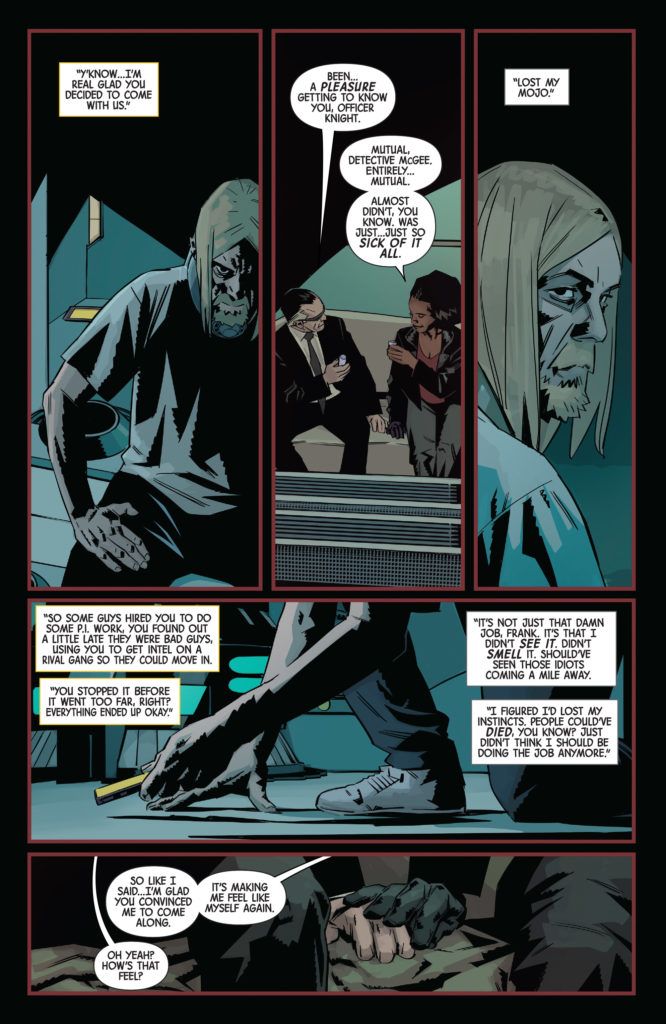 Best of the Batch

Just one issue remains in Weapon Lost before all of the Logan-hunting posses come together again in August’s The Hunt for Wolverine: Dead Ends #1.  As the best series (which isn’t saying much) of the four Hunt for Wolverine titles, the comic succeeds because of the characters’ stories beneath the main plot.  The life-threatening addiction of Cypher and the tension between Knight and McGhee carry the most compelling subplots, while Daredevil’s vigilant, calculating narration pull along the plot with a paranoid pacing.  Overall, Soule and Buffagni turn in a solid and compelling book in a largely tedious “non-event” event.