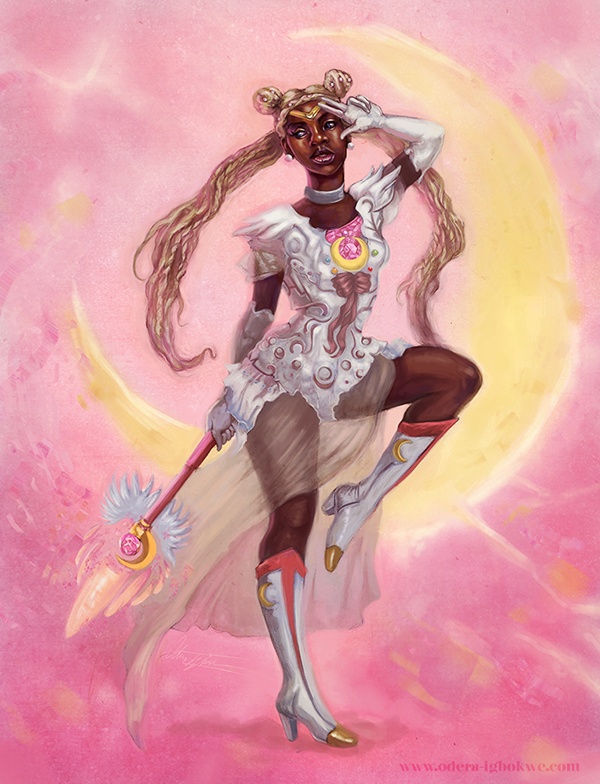 My earliest memories of queer boy classic Sailor Moon are of myself waking up much earlier than I needed to on a school day to catch the DiC dub — this was pre-Toonami — before heading off to school. Huddled close to hear the TV, this was a secret act, staying quiet so as not to wake my parents — I was not about to catch my mama’s wrath.

Still, I sneaked and watched. It was something sweet that was all mine, the adventures of Usagi Tsukino and her fierce squad. I felt kinship with them, which wasn’t unfamiliar; though I didn’t have language for why I’d long felt attachments to the female characters in the media I consumed: Rogue, Storm, Chetara, Chun-Li. Even my younger brother, during bouts of Street Fighter Alpha 2, would hit me with the “Why do you always pick the girl character?”

Sailor Moon followed me throughout elementary school and was especially important during the tail end of that time, the years kids hone their skills — observed from peers, parents, the world — for the social battleground that is adolescence, when we ceased being simply mean but could be cutting and cruel.

If Blackness already marked me with a target, then effeminacy would double that.

I learned foolish things like how it wasn’t cool anymore to express passion for things you were interested in. I learned more poisonous things. Don’t cock your hips like that. Rough-housing and pain is good for boys, though not expressing pain. Stop walking on the tips of your toes.

I’ll never forget one day my father told me I had too many female friends, and I should start hanging out with more boys. I don’t remember ever being more hurt and angry and scared before. Why did I need to leave the company that made me feel safe and loved, not strange? Because I needed to learn how to be a man, meaning I needed to learn how to be a Black man, meaning: If only you knew how scared I am for you, son, and how cruel the world is, and how I need to teach you all I know so that you can survive. I don’t begrudge my father. Social lessons are something we all learn, though this particular age, late childhood, is particularly fraught for people of color, learning the skills we need to survive in a world that often wishes us harm.

If Blackness already marked me with a target, then effeminacy would double that. Queer, even while nascent sexual desires fumbled, inchoate, I found myself closeted, walled-in really, both the prisoner and the bricks-and-mortar itself. I wore the masks and flat affects I needed to live. But at home, all it took were three words to let in some light and sweet air and — in my head at least — a glamorous costume change: Moon Prism Power!

It’s almost obscene how much real estate Sailor Moon took up in my heart.

In fact, my love for the show bonded me with my first best friend, Elena. As a queer, Black boy, Sailor Moon was a rare space where not only women but, crucially for me, femininity, in so many permutations, was celebrated. I was an anxious, quiet kid, terrible at the kinds of things boys are routinely told they should be good at — sports, being aggressive, hitting on girls — and even worse, I had no interest in being good at them either.[quote_left]Here was a show refreshingly free of the types of male heroes I failed to identify: the hot-shot hero who wants to rush in swinging or the bumbling fool stumbling into adventure.[/quote_left] I was effeminate and loved it, in my heart, if not in the world. The fact that there was a TV show of super-powered girls who could kick ass in heels blew my mind — that there existed even a fictional space where my queerness wouldn’t be strange or out of place was nothing short of miraculous.

The radical magic Sailor Moon provided me, its plots largely about women and their relationships to each other, was a space to learn that masculinity isn’t a rejection of femininity. Here was a show refreshingly free of the types of male heroes I failed to identify: the hot-shot hero who wants to rush in swinging or the bumbling fool stumbling into adventure. The only important, recurring male character is Tuxedo Mask, AKA Mamoru Chiba, Usagi’s bae, who is honestly such a bore.

More a narrative convention than an actual character (all those Deus ex Machina roses), he seriously needed to go. (I wish there were a version of the show without Tuxedo Mask.) The Sailor Senshi each had traits that are coded as traditional feminine; however, this doesn’t prevent them from having traits or interests coded as masculine. There’s bookish and shy Ami Mizuno, smarter than everyone, skilled in math and science, who dreams of becoming a doctor. There’s Makoto Kino with the strength to take down anyone in a fight, but would love nothing more than to find the perfect guy and cook delicious treats.

These skills and interests aren’t commented upon as exceptional because of their gender, but because they’re simply exceptional (Sailor Mercury is a genius; Sailor Jupiter is powerful). It’s also not so much a weaponized femininity — these girls literally fight with lasers, fireballs, space-time, etc. — a concept that’s questionable and shaky for POC, violently as our bodies are policed, but the fact that they were allowed to be multifaceted women. If the Senshi could combine masculine and feminine, then damn it so could I!

Though I didn’t consciously know it, the show helped me navigate my own ideas of queerness. Let me take a moment to quickly praise how queer this show is. The dub gender-swapped the voice actors of villains Zoisite and Fisheye from male to female (Why else? for being femme queer men) but how mind-blowing would it have been to see them using the power of drag for all their nefarious purposes? Disguised as a boy band, the Sailor Starlights transformed into women to fight evil (Sailor Starfighter even had a thing for Usagi). Unfortunately, the season in which they appeared was never dubbed.

And then, of course, there was queer power couple Sailor Uranus and Sailor Neptune.

Sailor Moon isn’t a perfect show, but it helped me during a time I often felt isolated

Said to be cousins in the dub, to disguise their same-sex intimacy, their queerness was never explicit. However, the endless repetition of “my cousin this” and “my cousin that” told me something was up. Besides, Sailor Neptune became queen of my heart. Watching her as a kid was a revelation, she was everything I wanted to be: elegant, artsy, sophisticated, and one hell of a fighter. She’s basically Cate Blanchett.

Neptune and Uranus are, other than Usagi and Mamorou, the only main characters in a long-term loving relationship; they also weren’t perfect. They’re stubborn, unafraid to ruffle feathers, icy, and distant (the last two were definitely traits, closeted me would become acquainted with). Flawed but relatable characters? Queer heroes and villains? Women who served looks and the forces of evil and a team of women warriors who worked together to stop them? Sailor Moon isn’t a perfect show, but it helped me during a time I often felt isolated.

There’s a small thing that I truly love about the show that I think I’ve overlooked for years. There isn’t a Superman/Clark Kent thing happening. By that I mean, there aren’t personas between when the girls are going to school or hanging out in the arcade and when they’re fighting a monster.

Usagi Tsukino is always Sailor Moon, a self undivided by henshin sequences, which was, in its own way, a promise of something happier to the scared, queer Black kid I used to be.

This is essay is dedicated to Elena Ayala who will always be my meatball head.