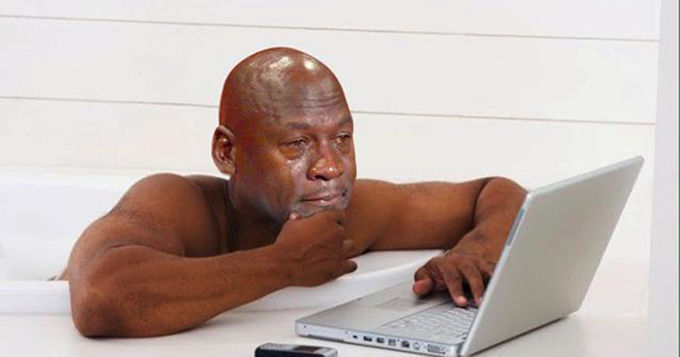 “The internet gonna come for all of us one day. I just hope when my time comes, it’s swift and forgettable”- Hanif Abdurraqib

One of the hardest things to do in life is to admit when you are wrong. If it’s your opinion on a hot topic, it can feel downright personal. Yes, you are entitled to your stance, but you are not above the consequences of sharing it. And if you share it on the interwebs? Wooooo lawd, good luck. It’s hard enough to admit to friends when your views are out of line, but to do so on a social platform like Twitter or Facebook? That’s a whole ‘nother monster. There’s something about getting up on your soap box to apologize and ask forgiveness that is such a tough hit to take (looks at self and 100% of male population globally) online.

No one likes being one-upped, ESPECIALLY online, but there are times where you just have to eat it. Take the hit, apologize (sincerely), and move on. If you get dragged online by the deity that is Black Twitter you gotta serve your penance, man. Just serve your time and move on. Trying to @ folks trolling you or people just legit making light of your situation is like trying to square up with falling snow. What you gonna do? Run outside and punch every single snow flake in the face? Impossible (unless you’re Nicole Homer). There’s levels to an “L.” Them shits are more diverse than Pokemon.

“The worst is the gray area L, like “is this an L?” and you squinting and shit, doing calculations on a white board. No fuck that, a chalk board. Like if you add the M, and carry the K, it might be an L, but if we apply TMZ’s theory of good press, it’s an L+”- Nicole Homer

You gotta realize when it comes to the internet there are “L’s” in waiting. “L’s” not even assigned to you. That you can straight up Tokyo/ Mario Kart drift out the way of beforehand, man. “L’s” that the lord is sending you to test your strength and teach you patience. Don’t even get me started on “L’s” you gotta take as a black/POC heavily invested in the nerd culture. I once reblogged an artist commission by (our go-to guy for art pieces) Tovio that was for a father and his sons as Saiyans; they’re black.

A user commented, “Sorry, hey, why do you have to take the popular, Asian character and make it black?” I wanted to answer with the flame emoji level snark but dude’s username is Cum-Bucket. Oh you think I’m joking, that I made this shit up just for the think piece? That there’s nobody on Earth that would go by Cum-Bucket as a user name?

*Looks into camera like I’m on The Office* Every atom in my fucking body wanted to clap back. I wanted to clap back for the culture and go in on representation, and actual appropriation because I was of course defensive for this cloud being put over this great COMMISSIONED piece for a father and his kids… but this dude’s name is Cum-Bucket. I can’t have that on my conscience, man. Oh, it’s not a spambot either. This dude is real, but the fuck I look like goin’ at it with someone named Cum-Bucket? That’s the type of shit that gets dug up on page 6 of Google search to come back and haunt you. I’m doing an interview one day and a screenshot of me and Cum-Bucket trading insults comes up on the screen. How the hell am I supposed to explain that shit?

I mean, ludicrous as it is, I can see the genius of having Cum-Bucket as a username because even if you win the argument with co-signs, you actually lost cause you spent that time debating with someone named Cum-Bucket. Your friends and family that follow you seeing that shit too? Nah, not me man. I had to take the “L” on that one. It wasn’t an “L” I needed or deserved, but I fucking took it. You gotta know when to fall on your sword because you either wanna be right or you wanna be alright. Being right isn’t worth getting into a social media argument with @MasterFapper over your fave character in a fandom that they said was trash.

There’s plenty of tweets I’ve sent that if I get questioned on them at work, I’ll go down with the ship on some “I said what I said,” but, I’ll tell you what, I’m not going down to the likes of:

Work: It says here you traded insults with someone named @IEatsDaButt07
Me: Yeeaaah, they said something bout Rue from Hunger Games… it wasn’t my best moment.
Work: Why would you even engage someone with that as a user name? By his username alone, you can tell they tried to get “I Eat The Butt” as the first username but it was taken. They were forced to add variety to it, plus they got ’07 on there as if they just been eatin’ ass since what I can only assume is shorthand for the year 2007 like his Father and his father’s father before him. This guy has a lineage of ass eatin’ that he can trace back through generations.

Yeah… I’ma tell you like Will Evans told me: if somebody messages something reckless/ignorant/snarky at you, “Mmm–How many followers they got? Only 127 people care what this cat got to say? Not Even worth the time.” That’s been my litmus test for Twitter fingers for the longest. Jordan Calhoun breaks that shit down into math, “I don’t respond to people with 40,000 tweets and 400 followers.”

I can not stress taking the “L” enough because once you start getting in a defensive state of mind responding back at folk swinging for the fences not knowing you just threw a wide hook shot, leaving your whole ribcage exposed for clapback. We seen it happen so many times with folks we were rooting for going off the deep end then catching that sniper. Y’all saw how fast , , Black men turned on Ayeesha Curry when she let the Twitter fingas bang out in the heat of the moment post-game 6 of Cavs vs Warriors in 2016 NBA finals. She deleted the tweet, apologized later on and took her L with no defensive clap backs – Jordan cry memes and all.

Can we just say the Jordan cry meme is a culture in and of itself as well? It’s become- it’s become a deity out here. The Jordan Cry meme is the grim reaper for loses.. on second thought, scratch that. @Jennib3 said it best with the Twitter fingers, “The Jordan Cry me IS the Many Faced God” from Game of Thrones IRL.

Maaaaaaan, you better give Ayeesha credit ’cause it be getting harder and harder to say the same for your fave celebrity when they get called out on some actual problematic statement they said or fucked up shit they did, right? An even worse when they try to defend their wrongness and just dig the hole even deeper. You watching the dragging unfold yellin’ at your phone for them to stay the hell down. You telling yourself they need you as a best friend cause you woulda’ called them up and told them ’bout themselves and how they actin’ a fool. A true friend will tell you when you need to tap out and throw the fucking towel. “But I’m sayin.'” Mmmm-mmm fuck what you sayin’, throw that towel. “I ain’t even mean it like that” You better chuck that towel, fam. “Is it really THAT big a deal?” Aye… what I just say?

Let’s not even begin to kid ourselves because we all indulge in a public dragging. We may not say nothing, but like a car wreck in slow motion or a white person doing white person shit at an unreasonable place and time, we won’t look away. We’ll continue to watch and commentate to ourselves or those around us. Look man, I’m just trying to save some faces right here. It’s 2016, there’s no reason for cats to be receiving a lower case “l” and then getting on social media evolving that shit into an upper case “L”.

If you a progressive and you fuck up? Apologize and take the “L”. If you claiming you ally and you come out of pocket, don’t lose your place at the cookout for not taking that “L” and apologizing. If you use your platform to do good, but fuck up occasionally, aye. Dust yourself off, regroup, apologize, hit the gym, take a shower, drive home, eat dinner, binge on that show you been meaning to catch up on, get in bed and take that “L” as a pillow, and sleep it off.

…As for the “other” muh fuckas. If that’s you out here spreading “Dark Skinned girls are ugly” memes and rhetoric, this ain’t for you. If at any point in a conversation you throw out the term Feminzazi, this ain’t for you. If you claimin’ “We’re all Americans, this is an attack on all of us” but been saying “I don’t see race,” This. Aint. For. You. I hope Black Twitter comes for y’all and you get dragged like Carl Bruner at the end of Ghost.