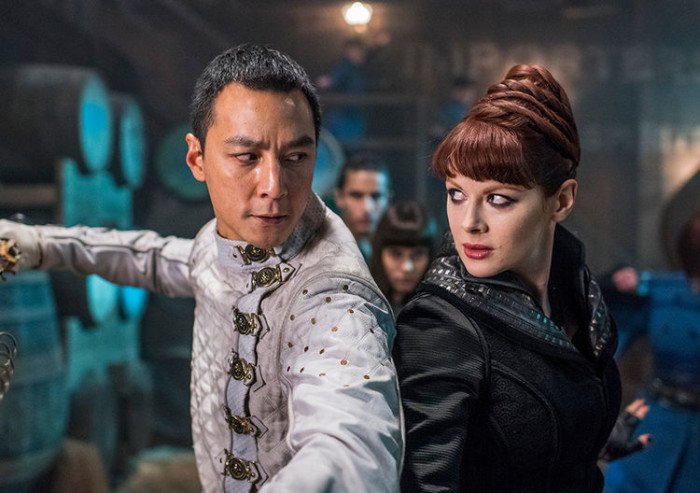 ***Spoilers be dressed in white, lookin’ like assassin’s from Frozen***

And You Say Clipp City

Fam, we didn’t even get a second to get our recliner’s adjusted this week for shit to pop off. We up in Baron Hassan’s compound and his foreman tellin’ him they losing cogs everyday. Man, being a slave owner is so fuckin’ tough, b. Hassan is like, we need to up production to– scratch that. None of your cogs, or your crisp white linens mean fuck all when your foreman gets Moby Dick-ed in the middle of the conversation. Yeah, you got a pest control problem cuz Monarch Butterflies done ran in your crib like search warrants. Hassan holds his own for a second, but the Butterflies roll too deep and they start knockin’ your boy all around his 700 thread counts, nahmean.

He try to run you know Widow stay fashionably late to the sword fights, bruh. Hassan is like, yo, how bout I back you, now? Widow like, bruh, you worth so much more dead than alive right now.

Bajie at the DMV trying to get safe passage for the three of these cats. They takin’ the greyhound through the wall, but all of this shit feels shady, even with the gorgeous complected sista leading the smugglers.

Maaaaaan, they ain’t been on the bus 90 seconds before they run into an army of chatterwhite shader lookin’ muthafuckas. Y’ALL CATS AIN’T NO REAL SHINOBI, FAM. Everybody get off the bus, except for our trio. Apparently it’s Baron Chau’s clippers who be buying up these refugees when they come through the checkpoint and Sunny ain’t trying to go back to that life. They send clippers to go retrieve them and Sunny put them fuckers through the window and puts numbers on the board. Man, Chau’s clippers might look like it, but they ain’t really about that Storm Shadow life, so they shoot about a month’s budget worth of crossbow bolts through the bus. Bus lookin’ like Boromir at the end of The Fellowship of the Ring.

Widow and the crew walk up in the Lazarus Pit to exchange housewarming presents with Quinn. Apparently, the best thing you can bring a dude living in the fucking bottoms is a muthafucka’s head. I personally, would’ve taken a coat rack. My wife is forever yelling at me to stop dropping my shit on the couch. Quinn took out Baron Broadmoor…and his wife…and his daughters. Jesus, Quinn. Steve Spicer possess more chill than this. Widow is like, the fuck is wrong witchuuuuu and Tilda pulls the knife, but Quinn is like, see…that’s why I killed them heifers, you making my point for me.

Widow and Quinn go talk business while Tilda trying to burn them angry calories by twirling the knife. She turn around see Veil Da Fictional Bae standing there with Lydia, basically lookin’ back at Tilda like, yes bish, you seeing this shit right. Your mom sold me back to Quinn, broad.

The trio chained up at the Chau plantation and shit look dire. Sunny, finally is like, ok, fuck this, let me get this promotion poppin’ off. Dude lifts up his shirt and shows all his work experience tatted across the back. Your boy trying to say fuck that entry level position, give me the shit with the benefits, yo.

Sunny get that meeting with Chau and they spend most of the time talking murder and mayhem in front of some renaissance era paint that depicts murder and mayhem. Chau wants Sunny to be her regent cuz, she ain’t stupid. But Sunny is like, I’m like 28% retired. I’ll lure the Widow, put some respek on this sword, and then you Amistad me and we cool.

Maaaaan, listen. The way this Badlands is set up, this might be the first time that Tilda has been catcalled, fam. Patriarchy is the fuckin’ cockroach man. Even after the world done ended, it’s gonna find a way. But Tilda actually got other shit on her mind cuz she sees Veil with Henny Rock. She want to apologize, but…look. Look. LOOK. Veil ain’t even been a mom that long, but she got the mom “I see the corruption on your soul” glare down like she been doing that shit for years. Veil gotta a look on her that suggests she’s part Gorgon, fam. Ain’t nothing worse than someone that beautiful that looks like they are literally trying to heat vision your existence.

Tilda apologizes and Veil like, Fuck that. Tilda is like, but ma dukes is doing– Fuck that. I know she only wants to — Fuck her. But also, how someone make you feel bad for not poisoning somebody. Like, “had you just dabbed some of that cyanide, none of us would be in this shit gurl. Now go think about what you didn’t do.”

Up in Chau’s crib, SHE GOT SUNNY IN THAT ALL WHITE EVERYTHING, ALL OSCARS EVERYTHING THING, ALL EXECUTIVE BRANCH OF THE GOVERNMENT EVERYTHING, ALL CONSERV–, ok, you get the point. Sunny says he needs MK cuz that will lure the Widow out, even though MK is washed now. MK’s power set lookin’ like firebenders during a solar eclipse. He talkin’ that shit like he bout to desert Bajie too, but he slips him that dungeon key one time while Bajie hitting him with the bars talkin’ about he ain’t never gonna be shit except a killer.

Quinn eating his steak bloody, but considering how he just carved up a whole family, I don’t know if I trust the meat this cat servin’ fam. Quinn eating dinner with Veil and Lydia. And if watching Quinn eat wasn’t bad enough, your boy talking about making Henry his rightful heir. By marrying Veil. Clippa What?!?! Clippa if you don’t go on somewhere with that bullshit. But nah, Quinn serious AF. He trying to create Big Love with him, Veil, Lydia and Henny Rock in the most dysfunctional fam ever.

Bajie still going off about Sunny until he realized that dude left him the bookmark in his pocket and makes his escape. Bajie jacks a motorcycle and follows the motorcade to meet up with the Widow.

Tilda run up on Widow like, Mom, what does intersectional mean? Tilda starting to really see this shit for what it is, yo. Widow can fight her ass off and looks great doing it, but she really ain’t shit, fam. Widow admits that she wanted to punish Veil too, because she tried to turn Tilda against her…cuz Widow may be manipulative and out of control…man, I’m glad Veil was really far off with her assessment…

Monarchs bring in Jair, talking about he defected from Chau. But was part of the plan for Jair to get the shit beat out of him doe? I feel like that’s some improvisation he didn’t’ agree to. He reveals that Chau is trying to trade a boy to the River King for weapons AND TILDA IS IN HER FEELINGS FAM.

Look, in the span of a couple of episodes, Tilda done been kissed by Odessa, discovered her mother is Marie Le Pen, had Veil basically turn her to stone, get catcalled, and now learned that MK is alive and back in the Badlands. AND THERE’S STILL TWENTY MINUTES LEFT IN THIS EPISODE. She gonna need a minute, yo.

As compared to Veil Da Fictional Bae who really just wants a Snickers and to get the fuck away right now. Like, Veil is ready to risk it all on a carving knife to Quinn’s heart right now. Lydia is trying to reason with her like, this ain’t about you, its about Henny Rock, but Veil is really on that, it’s gonna be him or me and I don’t plan on that shit being me, drama right now.

MK trying to act hard with Sunny and Sunny gotta be exasperated like, this dim muthafuckas don’t catch on to shit. He tells MK that he’s got a plan and hands MK a blade for when this shit pops off.

AAAAAARRRRGGGGHHHHH grumble grumble. This wedding ceremony jumping off already!?!? I didn’t even get time to process this shit yet. Baron come out here lookin’ like the Sun King from Meridian and shit.

Veil step into the ceremony lookin’ like she been dipped in Sunset and shit. They would look immaculate if it weren’t for the fact that this is Thomas Jefferson levels of fuckery, man. AND LYDIA IS OFFICIATING?!?! Man, what are we even doing you. What. Are. We. Doing? We gotta join bloodlines too? You gotta cut Veil for this shit? I’m too through man (also, can we take note that Veil took her cut to a lot better than MK did earlier). Veil does the deed and cuts Quinn and legit wants to cut EVERYTHING ON THIS DUDE, but Lydia steps in before that shit got real Jason Voorhies.

I…I wanted to tap out, yo. Veil leaving with Quinn to consummate the marriage and I had to remember that I paid my hard earned money for the TV to keep from throwing some shit at it. I can’t yo…I can’t.

Aww shit, it’s rain and the meet, so you KNOW this shit about to be extra crazy fighting. If I gotta go hunting on the Widow, I’ma make it look sexy.

The ambush is on and Jair dead as fuck. Eh, he was a fuckboy anyway. Sunny gets the drop on Widow, but she start negotiating mad quick talking about she knows where Veil is. GUESS SHE DIDN’T HAVE TIME TO MENTION THAT SHE SOLD VEIL INTO SLAVERY BUT SURE OK, DETAILS, WHATEVER. 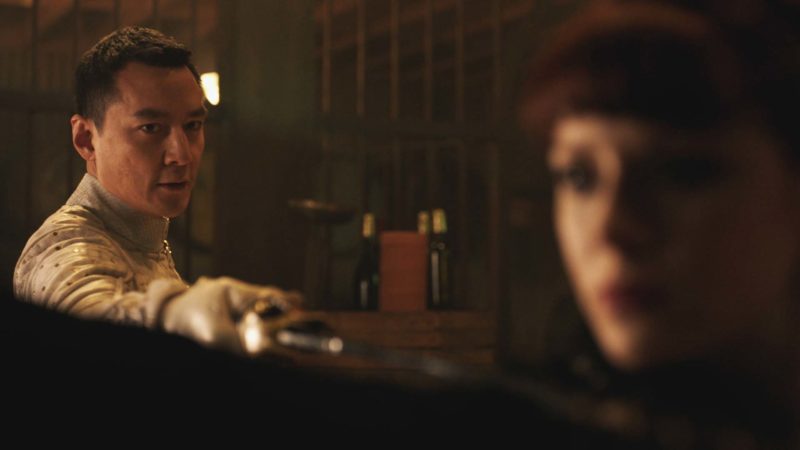 Sunny flip sides like Anakin and start fighting with Veil. They taking apart these Labor Day violating muthafuckas with the quickness. Tilda out here just wylin’ out on cats. She gotta be top 5 in the Badlands yo. Her squabbles is impeccable.

Aaaaaaarggghhhhh, we back to the consummation shit again and I still ain’t ready. Veil letting that dress hit the floor but she got a blade on the hip, shinobi style. Lydia makes a break for it while cats are celebrating while Quinn is doing Quinn shit. Veil is about to give your boy the high and tight shave when Lydia comes in with the report that Tupac back and done dropped another album on Chau’s people. That saves Veil from giving personal consent testimonies on college campuses in the future and it saves Quinn from getting the Oz Penitentiary treatment. Quinn gets up like, Sunny stay killin’ my vibe. Veil, not only got saved from some treacherous shit, but learned that her bae is alive and coming to find her? I mean, the day started pretty bad, but…