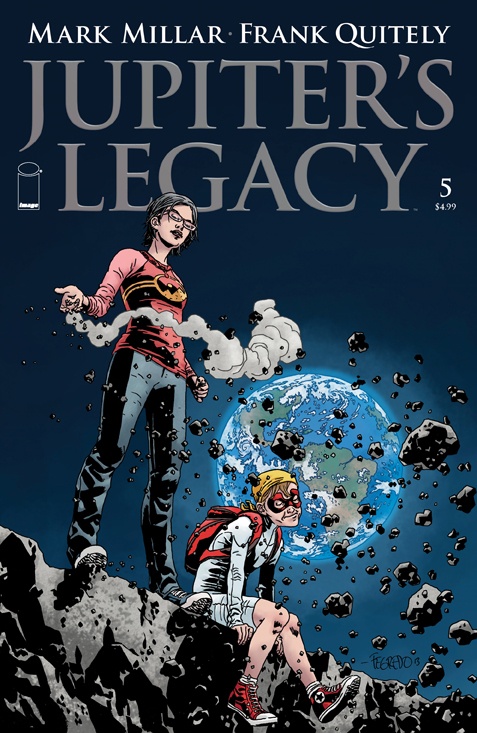 The fifth and final issue of Jupiter’s Legacy‘s initial run dropped in January this year. Took the homies Millar and Quietly a whole year to release it after issue #4 came out in January, 2014. This year-long wait became such a big talking point that Millar announced that starting in April, all Millarworld titles in a series will be completely drawn before releasing any of the initial issues, in order to ensure he sticks to his once a month schedule of releases.

With that said, Millar wastes no time in this issue. From the jump they saddle up and ride right into the Aussie manhunt. Sicilian Voldamort, Major Barnabas Wolfe rollin up into a nice little office building asking for a Miss Joan Wilson, who is ever so surprised that anyone would want anything to do with a simple claims supervisor. This doesn’t give me any reason to suspect her of mischief now does it?

Major Wolfe is the man responsible for finding unlicensed superheroes in foreign territories. He was never big on fighting crime and damn sure didn’t have the looks for advertising contracts or magazines, but found his calling running the anti-terrorism squad. He goes over a few simple questions with Miss Wilson and she answers them all like a straight-up boss. That is, until, Wolfe drops the bomb that while they’ve been having their speed date Q&A, he’s been rearranging the molecules in the air into knockout gas. She turns around, sees the passed out predicament she’s now in, drops a very appropriate, “Oh Shit” and dives out the window… growing with each and every falling foot.

The world’s tallest super “criminal” takes one giant step forward and gets bodied by Wolfe’s particle manipulation. Didn’t stand a chance in hell against this bloodhound.

Quietly lets you know he means business this issue. The facial expressions during that conversation were well articulated and he doesn’t slow down when he shows us the life that Jason has been living. Lil homie up on the moon building an augmented gene locating device so he can round up all the homies and fight back one day. Too bad mom dukes is a super sleuth… literally. She noticed he had 2 microscopic moon particles on the bottom of his shoe! The pain in her face when she has to force him to destroy the machine is incredible. You just know she’s looking out for the kid’s best interest in life. Wolfe reports back to Uncle Walter that they didn’t find Chloe, but got a nice little consolation prize in Skyscraper. The creator of The Hunger Games didn’t just shrug off not finding Chloe, or whoever is responsible for all these mysterious Australian rescues and anomalies. Na, he straight up had his team get crazy forensic with their search and located reckless-ass Jason because of his reflection in a raindrop! They set up a trap and the final scene is set.

Cue the bridge collapse, cue the classmates reveal to Jason that they know he’s a superhero, cue a young boy thirsty for adventure and glory disobeying his parents and cue the showdown! Jason is extremely powerful, but severely outnumbered. He does the only thing a boy in his predicament can do. He calls out for his mommy and Wolfe got JOKES. Wolfe doesn’t know exactly who mommy is, as Quietly crafts the gorgeous images of her traveling at absolutely vicious speeds coming to her boy’s rescue. She explodes onto the frame and hits the bounty hunter with a line I can only describe as, Samuel L. Jackson meets Mother Theresa. Mayhem ensues, and Chloe shows the entire world at home watching the news exactly what it mean to put in that overdue time and a half WORK! Major Barnabus Wolfe’s whole crew got the fade and the familia was up in smoke before a soul could  try and follow behind. With all 3 members of the fam on the same page rebuilding the meta-scanner and recruiting a new team, Millar and Quietly leave us on a sick cliffhanger as we await the next 5 issues.

You can catch reviews of all the issues in this series here. Stay up as we review the newest entry into this world, Jupiter’s Circle, dropping next week.