[quote_simple]SUPERHEROES WERE THE SUMMIT OF AMERICAN ASPIRATION AND SO OUR CHILDREN GREW UP TO REMIND MANKIND OF EVERYTHING WE COULD EVER HOPE TO BE.”[/quote_simple]

Issue 1 of Jupiter’s Legacy was cute. Nice little setup and establishing of the focus in this volume. Yeah, that was Namekian nice and all, but Mark Millar and Frank Quitely went Super Saiyan on this one! We were left with the Anti-Brandon and Walter regime outside a palace in Dubai, trying to extract Repro, to convert into an ally in their fight. Raikou, the girl with the molten hot fire powers that everyone cant stop fawning over is standing in their way. 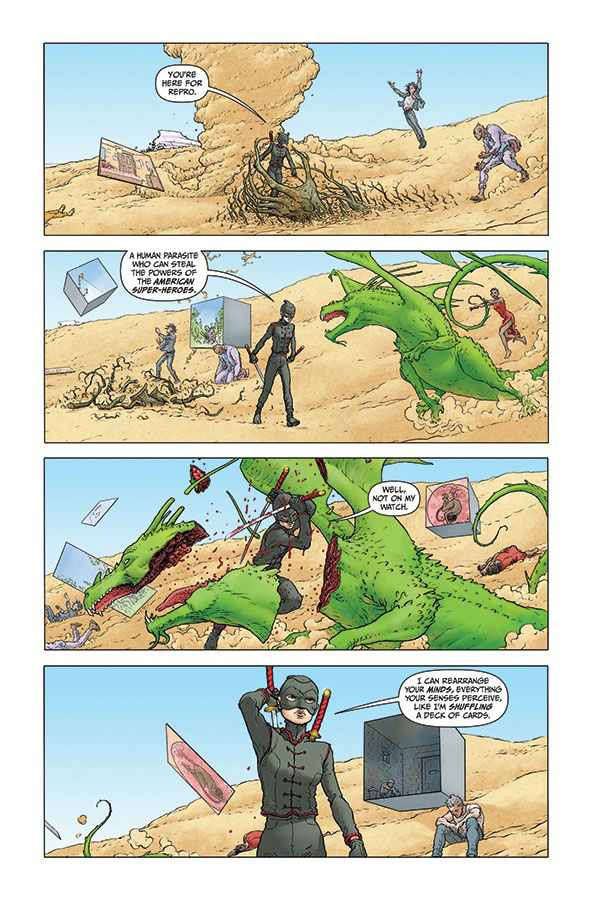 Starting with heavy hitters, the team sends in one squad member after another. They know homegirl got psychic powers that blow the hinges off the typical superhero’s capabilities so it’s a grind it out affair. Just when they Raikou in the perfect position, the turning point goes down. Repro is eventually sprung from his cryogenic type sleep and his parasitic powers get put to use in the most wonderfully hilarious and potent way. Frank Quitely shines brighter than a hypergiant in this cosmic rainbow-laced panel of a giant unicorn being rode by an overweight cigarette smoking cowgirl cat. Amazing.

The Brandon and Walter show continues to deteriorate as they attempt to give superheroes a purpose in their New World Order by reinvigorating one of America’s crumbling industries. They pull out all the stops to show America they plan to make this huge and glorious. They plan to use this to ease their tension with China. They plan to… aaaaand absolute annihilation goes down. What does Brandon do as a response to this betrayal? This atomic assault on his person? Being the hothead that his father never was, he turns his back on his partner and heads straight for the far east to seize control like Kublai Khan.

Out in Africa, the Anti-Asshole regime is continuously and tirelessly hunting and recruiting. Jason is not only one of the most powerful superheroes on the planet, but is also a technological mastodon who’s meta gene scanner stumbles across the most major of keys. Hutch and the crew may have just located the creator of their hideout Headquarters. The original technology whizkid. The greatest supervillain of all time. George ‘Skyfox’ Hutchence himself.