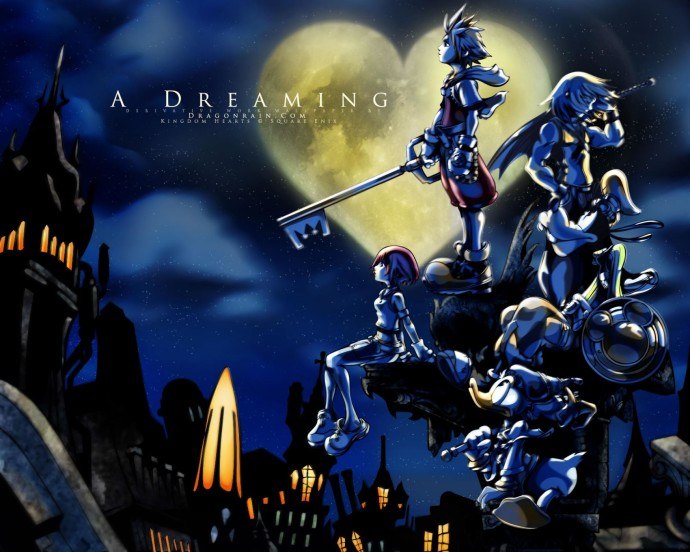 [divider type=”thin”]
[dropcap1]G[/dropcap1]rowing up, Disney movies ruled the world. (Favorite Disney Movie: Jungle Book ). I still have the VHS tapes of allllll the Disney joints stacked in a box at the crib right now! My cousin got me into the Final Fantasy series when I was young (Favorite FF: FF VIII). Then ’02 came and Square Enix had the insane idea of combining Disney and Final Fantasy (Later on The World Ends With You joined the party) into the most influential creation to my entire life: Kingdom Hearts!

When the game first dropped I didn’t have a PS2. I was hooked on the small purple box called the GameCube. But my cousin had a Playstation 2 and I was over my aunt’s house all day everyday anyway so we would take turns defeating Heartless. Sometimes we wouldn’t even play the game. We would just play the opening sequence over and over jamming out to Sanctuary. It was a one of the most memorable family bonding experiences I have from my childhood.

In ’05 Square Enix struck lightning again with the second console installment of KH. The same year my mom got the realest MVP award & bought me a PS2, KH, & KH 2! I was going back to back way before Wheelchair Jimmy had a record deal. I kept up with the series for the story and the connection I had with the characters. Sora, Riku, Kairi, we practically grew up together. I caught a lot of heat from the cooler kids for loving the games so much. But I didn’t care. Call me a nerd. Fine. You don’t want it with this Keyblade though.

*Spoilers beyond this point*

Other than real life experience, the characters & stories in KH have taught me some of my most important lessons in life. Trust, forgiveness, love, perseverance, choosing your battles, friendship, how to build a spaceship out of starburst, everything! Sora, Riku, Axel, Aqua, Roxas, Ansem Mickey, etc. played very valuable roles in shaping how I see the world today.

Although, in all honesty Sora is a kidnapper’s white whale. He’s naive, way too trusting, and will do anything you asked him to for food. But in retrospect he teaches you a lot as you go on this journey with him. He is the posterchild for don’t judge a book by its cover. He trusts until given a reason not to and even then still shows you that you should give people second or even fourth chances. His best friend betrays him, steals his sword, kidnaps his girl, summons monsters to collect his heart, and after all of that he still forgives him and tries to save him from the darkness. What!? I would have deaded that friendship after Monstro but Sora is a better teenager than I and really showed me what friendship was and what forgiveness meant. I’m a better best friend to my best friend because of the lessons Sora taught me.

Kingdom Hearts also helped me through a lot of problems with my inner demons. As a teenager we all go through phases of sadness, doubt, and confusion. Riku is an accurate representation of what almost every teenager goes through. Trying to do the right thing, losing your way, making mistakes that greatly affect yourself and the people around you yet somehow finding the light and redemption while not allowing your past to define you and coming out of it a better person. His story line from Kingdom Hearts 1 through Dream Drop Distance is the digital manifestation of started from the bottom now we here!

Also Kingdom Hearts inspired me to start traveling to other places. I’m from North Chicago Illinois. A lot of people where I’m from don’t ever leave. Usually it’s you’re born in North Chicago and you die in North Chicago. In Kingdom Hearts I was able to travel, meet new people, see new worlds, enjoy new things and that’s what initially gave me the motivation to travel in real life. It also goes hand in hand with having your heart set on something that’s supposed to be unattainable and proving that idea wrong. Sora being right about what Kingdom Hearts really is in spite of being told differently, Riku being the Keyblade Master even though he doubted himself more than anyone, Axel believing in this idea of being more than a nobody and then becoming a somebody even though it’s supposed to be impossible. If the Kingdom Hearts series had to pick a new theme song it would be “I Wonder” by Kanye West. The opening sequence would be Sora, Riku, Kairi, Roxas, Ventus, Terra, & Aqua falling through the sky while Kanye is in the background with the sunglasses from the “Stronger” video nodding his head to the guy singing in the background like “and I wonder /if you know/ what it means/ to find your dreams come true.”

There’s so much that this series has done for my childhood. For a lot of kids’ childhood. I could go on and on about everything I’ve learned from playing these games over the last 13 years like how to chase your dreams, never give up, knowing their will always be trials you have to go through, that you are special, timing is everything, everyone in the world is somehow connected, compassion, and a slew of other thing but basically I ‘m a better person because this series exists. 10 years later & I’m beyond excited for the release of KH 3. It’s been a long time coming.

Kingdom Hearts is one of the most influential RPG’s of my generation.