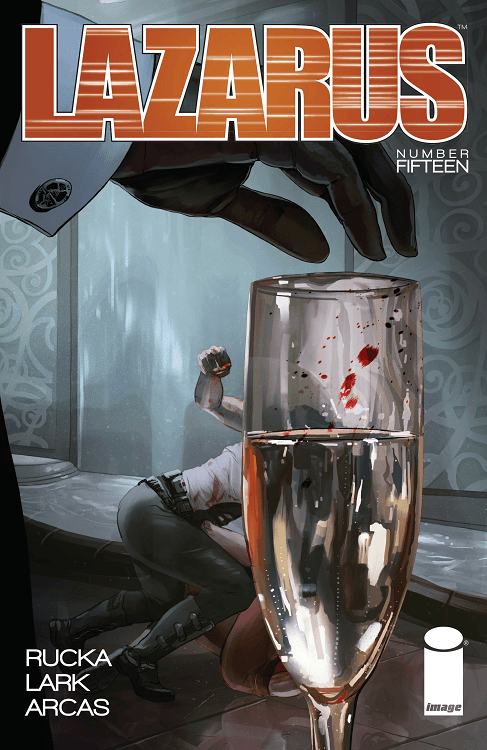 You know who Clyde Stubblefield is? When James Brown was absolutely killing the Big Band sound, Clyde Stubblefield was the man on the drums. The Funky Drummer? That’s him. The phrase, “Gotta give the drummer some?” That’s Clyde. James Brown, who at the time was the most electric performer on the planet, would occasionally get the hell out of the way and let Clyde go to work. Michael Lark just had his Clyde Stubblefield moment in Lazarus #15.

We’ve been waiting for some Lazari on Lazari violence for 14 issues now and it did not disappoint when it got here. Forever squares off against Sonja just when they were becoming good friends. As Forever notes, they never had a choice in the matter. I think the best compliment (among the many I have) I can give to the battle and the artwork is that you can FEEL how brutal this battle is. We’re talking about to women designed as killing machines who are indestructible in most cases, trying to end each other. At the instruction of two old, bitter and greedy men. That shouldn’t be overlooked. But what’s even more engaging then the fight, is the spectacle of the fight.

There is no dialogue or conversation during the actual fight, but every panel with a slash across the back, or a wrist breaking is accompanied by the emotionless spectating of everyone else at the conclave. This is the most elegant gladiator arena, and frankly it seems a little more disturbing than peasants in togas throwing bread and vegetables at the combatants fighting in the sand. I don’t usually make this aside, but this is captivated perfectly by the cover drawn by Owen Freeman. Look at it! It perfectly gives you a summation for the tone of this issue.

There are some surprises before and after the fight, which I don’t want to spoil for you, but let’s just say that it’s a well-rounded issue with a lot at stake. Broken record. Lazarus: it’s great. Not good, great. You should be reading it. Point blank period.