Book Three: Change / Part III
Spoilers be getting electrocuted off the back of the motorcycle

Part III begins with all the things you wanted: a fight between an old general that just discovered his bending, a thief who is learning how to use his bending to be a more efficient thief and shipping young love. Lawd, I don’t know how many more Jinora blushes for the young punk I got in me. How she so connected to the spirit world and can’t see this dude rotten? The airship finally flies over Ba Sing Se and the Lower Ring lookin like it got abandonded after the Colossal Titan broke through Wall Maria.

By the time we fly over the poor and the working poor, we finally make it to the upper ring, or you what we would call the House of Representatives. The counselor to the queen wants Korra to know that the Queen is a little demanding. Like a big green and yellow clad leach. She still sour about Earth Kingdom territory being used to build Republic City and the fact that none of her earthbenders can make turtle doves in the royal garden. Korra tells her they came to find the new airbenders in the kingdom and the Queen gonna send her on a gotdamn Fetch Quest, like this is an RPG. With no Pip-Boy at that.

Back with Team Avatar, you will never guess what happened: Kai saw all that new Earth Kingdom money and got ghost. Him getting flown into the Upper Ring where all the wealth is at like those people that put the basket of candy on the front porch with a sign saying “Please take one.” Bolin feels like his little brother is lost, but Mako knows that the only thing lost is little bastard’s moral compass. He’s taken his grifting to new levels with his airbending and worked it into his scam now. During the pursuit, he tricks our boys into catching the 6 train to hell (The Lower Ring). When they can’t get back on the train (because their wallets got lifted by Kai, big shock), Bolin wants to look on the bright side. “The good news is that you can go to the bathroom anywhere you want.” Mako lookin at him like:

These cats gotta get back to that living on the streets life while Kai living in luxury and shit.

And these streets that Bolin and Mako are in are rough son. Shit so bad, the fruit ain’t worth stealing. But at least they’ve stumbled upon their family, like all 76 of them. Turns out their parents are the ONLY members of their family that aren’t still alive. The whole damn family tree up in the Lower Ring sharing a studio apartment.

At the North Pole, Zuko and Tonraq arrive to let the Sunshine Twins know that they have a secret prison even they didn’t know about. Desna and Eska are mostly upset at all the missed opportunities to through people they dislike into a secret location. Can I just say, I was surprised and still delighted to know that Desna and Eska RUN THE WHOLE DAMN NORTHERN TRIBE…I mean, what in all fucks man?!?! I’m guessing this wasn’t done by a Democratic vote. The best part of course is when Zuko is explaining that their prisoner P’Li can make explosions with her mind and that he once hired someone with similar talents.

Tonraq, like, gotdamn, you just gonna casually slide into the DMs that you tried to kill my daughter? Word?

It’s Double XP weekend in Ba Sing Se, so Korra and Asami are still on this quest to secure the Queen’s gold. Of course they show up and already know this shit is a set up. When them dudes from Mad Max show up its time for that good Korra / Asami aka Monica Rambeau / She-Hulk murda muzik. You know Asmai rockin that black power fist Huey Freeman put together from the internet. 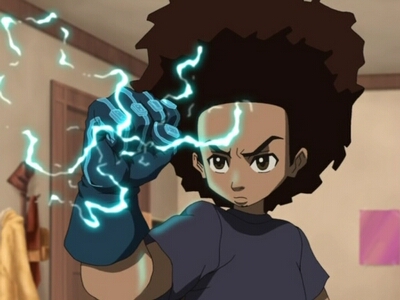 Fa real, I’m still not thrilled that Asami got sidelined for so much of season two. Have you seen her give out that work #NoBending???

The ruffians bounce, but not before letting Korra know she backed the wrong horse. Might be time to take that Romney ’12 bumper sticker off of the airship.

Back down in the Bottoms, Bolin and Mako spend more quality time with the fam, but they had to break the bad news to Nana that their parents were dead. Eventually, she shows them a photo of their former family which causes Mako to give her, her son’s (his father’s scarf). Yo, Marko might give up a pinkie toe before he parts with that scarf. Shit hit a brotha right in the animes, b.

To close out the episode, Korra brings the Queen her blood money, but she is FED UP, b! The Queen talkin about we ain’t seen airbenders since Aang was breaking Appa from the circus, but Korra knows that’s some ol bullshit. And we learn it too as Kai still on his confidence game when he gets snatched up and put into detention for the Earth Nation’s airbender army…aiight.

So yeah, Korra gonna have to tear this whole bastard down around the Queen’s ears and I can’t wait to see it happen.