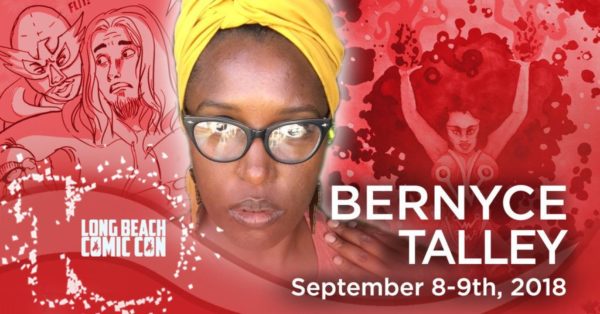 One is the Loneliest Number

Each year, the corridors of the Long Beach Comic Con exhibition hall are lined with artists selling their wares. During con season, I’m used to not seeing many Black female professionals. Usually, I seek them out, wandering up and down the rows of tables looking for a sister to talk to.

Comic books, jewelry, corsets, and stickers–you can find almost anything your fandom heart desires at a comic convention.

Anything except Black women.

Enter Bernyce Talley, the only Black woman artist featured in the LBCC program. Illustrator of Monty Gomez is the Luchador and writer/creator of Le Menagerie, Bernyce creates unique art that highlights the minority community so often missing from comics.

Don’t get me wrong. Long Beach Comic Con has actual Black people there. Every year, fans from all over Los Angeles county head down to the coast to enjoy a weekend of geekdom. LBCC draws all types. Still, in an industry where most of the comic artists are white dudes, Bernyce Talley stands out. She’s a dedicated Black artist who works hard in comics and even harder in her community.

Doing it Strong in South Central 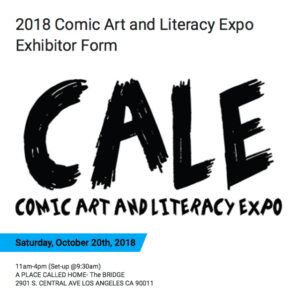 For over 10 years, Bernyce has worked at A Place Called Home, a non-profit organization created to serve local kids through education, art, and nutrition. As an art coordinator studying to get her California teaching credentials, Bernyce believes in the power of art and kids. At APCH, she uses art to inspire, teach and relate to her students. She even invited me to the 3rd Annual Comic Art and Literacy Expo happening Saturday, October 20th and hosted by APCH.

Talk about dedication. We should really pay our teachers more.

The Complicated Art of Being a Black Woman

As we chatted at her booth, Bernyce took the time to explain some of her displayed artwork. Many of the images depicted female superheroes reinterpreted as Black women. The most intriguing images, though, were of two Siamese twins connected at the Afro. Bernyce told me that her mother knew Siamese twins and the story always interested her. While in college, she wrote a short story about twins connected by their hair and later, drew them. According to Bernyce, the twins go through a spiritual as well as physical transformation. At first, they are so close that their hair gets entangled, and they cannot be separated. As they get older, the sisters decide they prefer to live individual lives, and they shave their heads, finally becoming two instead of one. Bernyce showed me her sketches and told me she didn’t really know how she felt about the ending–an image of the twins with shaved heads, wearing a single dress, separate but together.

And that’s how it is for Black women at these comic cons. Separate, but together, aware of each other, even if we’ve never formally been introduced. Bernyce is a shining example of a hardworking, dedicated Black artist, but she isn’t the only one, Long Beach Comic Con.

Even as I lamented with Bernyce on the lack of Black women artists on the floor, she pointed me toward another woman, her friend and coworker. “She’s at the booth with all the unicorns,” Bernyce told me. “You can’t miss her.” I turned in the direction she indicated, excited to meet another geeky Black woman, hopeful that one day, there will be more of us to represent at events like this and glad to have Bernyce representing us, for now.